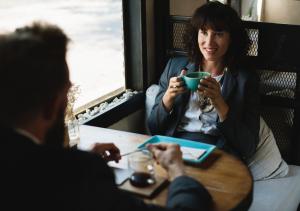 When truth unmasks wrong, those who are exposed get very nervous, like the two brothers in a story I heard recently.

These brothers were rich. They were also wicked. Both lived a wild, unprofitable existence, using their wealth to cover up the dark side of their lives. On the surface, however, few would have guessed it, for these consummate cover-up artists attended the same church almost every Sunday and contributed large sums to various church-related projects.

Then the church called a new pastor, a young man who preached the truth with zeal and courage. Before long, attendance had grown so much that the church needed a larger worship center. Being a man of keen insight and strong integrity, this young pastor had also seen through the hypocritical lifestyles of the two brothers.

Suddenly one of the brothers died, and the young pastor was asked to preach his funeral. The day before the funeral, the surviving brother pulled the minister aside and handed him an envelope. “There’s a check in here that is large enough to pay the entire amount you need for the new sanctuary,” he whispered. “All I ask is one favor: Tell the people at the funeral that he was a saint.” The minister gave the brother his word; he would do precisely what was asked. That afternoon he deposited the check into the church’s account.

The next day the young pastor stood before the casket at the funeral service and said with firm conviction, “This man was an ungodly sinner, wicked to the core. He was unfaithful to his wife, hot-tempered with his children, ruthless in his business, and a hypocrite at church.… but compared to his brother, he was a saint.”

“Demetrius has a good testimony from everyone, and from the truth itself. And we also testify for him, and you know that our testimony is true.” (3 John 12, HCSB)

“Therefore, brothers, select from among you seven men of good reputation, full of the Spirit and wisdom, whom we can appoint to this duty.” (Acts 6:3, HCSB)

“Furthermore, he must have a good reputation among outsiders, so that he does not fall into disgrace and the Devil’s trap.” (1 Timothy 3:7, HCSB)

Demetrius, like the first deacons, and people called to be a pastor, are people who have a good reputation. He was an example of the kind of person someone should look up to.

Why am I talking about Demetrius, and using him as an example of communication? What does he communicate? He communicates his life in Christ.

I communicate my life in Christ by how I speak with others.

First, he shows us that we communicate our life in Christ by the way we speak. We speak and talk at different levels.

The authors of the book, Who Cares About Love, suggest that there are four levels of communication.

The first is the exchange of cliches: “Hi, how are you? Have a nice day.” The second level of communication shares data and information. Talk is about things that are impersonal and non-threatening—the weather, sports, world events. The third level is when we begin to share something about who we are—our opinions and attitudes, our dreams, goals, and values.

The fourth and most intimate level of communication is when we share our feelings, emotions, joys, and fears with another person.

Sometimes we communicate very well when first beginning a loving relationship when we are at the first or second level. But we can easily stagnate at one of these levels if we don’t choose to go deeper and become more personal, open, and intimate.

Do we bring our communication to the place where we point people to Christ? Do we use the first level – small talk? Do we share the weather, sports, and events? Do we share our opinions and attitudes? Do we get to the point of telling others who we care about? Would someone know that we follow Christ by the way we talk?

“Dear friend, do not imitate what is evil, but what is good. The one who does good is of God; the one who does evil has not seen God. Demetrius has a good testimony from everyone, and from the truth itself. And we also testify for him, and you know that our testimony is true.” (3 John 11–12, HCSB)

I communicate my life in Christ by how I act.

Demetrius was an excellent role model preeminently because he practiced the truth of God’s Word in his life.

THE EXAMPLE OF GEORGE BEVERLY SHEA

Many of you know that George Beverly Shea, the soloist for the Billy Graham Evangelistic Association, died this week at the age of 104. A website was set up where people could write about him and his life. Here are two people and what they wrote about their personal experience with him:

The first, and only time, that I met Mr. Shea was as a sixteen-year-old at a Word of Life Rally in the old Madison Square Garden in New York in 1954. Mr. Shea was guest soloist on the program and I was there playing trumpet with the Word of Life Brass Ensemble.

I had heard beforehand that the then-famous Mr. Shea was going to be there singing. When we arrived at the “Garden” backstage to prepare for a run-through of the songs we were to play that night, I glanced over to the back side of the stage and saw this man quietly sitting alone by himself. It was George Beverly Shea. My heart jumped. I wondered to myself if he would talk to this scrawny young trumpet player if I approached him. I summoned up my courage and introduced myself to him. You know what: he talked to me as if I was a friend. This soft-spoken, humble man, George Beverly Shea, so impressed me by how he treated me that I have never forgotten that moment. What a blessing. Thanks, Mr. Shea!

I have very happy and precious memories of meeting George Beverly Shea when I did two interviews with him for Radio Trent in England. His humility, sincerity, commitment, and friendliness will always be remembered.

One program shared with George Hamilton 4th was particularly memorable when their Christian testimonies were shared along with lots of humor, and fascinating experiences with his friends on the Billy Graham team.

He is an example for all Gospel singers to follow, clear message, clear diction, humility, and a complete commitment as a servant of Jesus Christ

Thank God for his life and example.

The courts of Heaven will be ringing When Bev Shea is singing.

I also communicate my life in Christ by my associations.

“Demetrius has a good testimony from everyone, and from the truth itself. And we also testify for him, and you know that our testimony is true.” (3 John 12, HCSB)

THE TWO-WAY STREET OF MY ASSOCIATIONS

The first street is from the church. The church watches other Christians and with whom they associate. Just like the religious leaders, some will see good in our associations, and others will question it.

Jesus spent time with the lost and was criticized about it by the politically religious people.

“The Son of Man has come eating and drinking, and you say, ‘Look, a glutton and a drunkard, a friend of tax collectors and sinners!’” (Luke 7:34, HCSB)

At the same time, Jesus met with the woman at the well, and no one questioned his conversation with her.

At the same time, there is the danger of our associations ruining our witness for Christ.

“A righteous man is careful in dealing with his neighbor, but the ways of the wicked lead them astray.” (Proverbs 12:26, HCSB)

Paul is quoting a Greek poet in 1 Corinthians 15:33. As Warren Wiersbe notes:

If there is no resurrection, then what we do with our bodies will have no bearing on our future. Immorality was a way of life in Corinth, and some of the believers rejected the resurrection in order to rationalize their sin. “Evil company corrupts good morals” is a quotation from the Greek poet Menander. The believer who is compromising with sin has no witness to the lost around him, those who “have not the knowledge of God.” What a shameful thing to be selfishly living in sin while multitudes die without Christ!

“The one who walks with the wise will become wise, but a companion of fools will suffer harm.” (Proverbs 13:20, HCSB)

Photo by rawpixel on Unsplash

3 John 1-8 How to Build Lasting Relationships

February 8, 2007 3 John 13-15 How to Invest Yourself in Others
Recent Comments
0 | Leave a Comment
Browse Our Archives
get the latest from
Jim Erwin
Sign up for our newsletter
POPULAR AT PATHEOS Evangelical
1