The UNKingdom of God by Mark Van Steenwyk

The UNKingdom of God by Mark Van Steenwyk

The UNKingdom of God by Mark Van Steenwyk is a guide to a self-described Christian anarchy. Van Steenwyk questions the meaning of “American Christian fidelity. He claims that Christianity became Christiandom in America and makes the following argument (27):

He contends that the Christian faith made a mistake when it become the official religion of the Roman Empire. The subversive elements were downplayed. Since that time, Christianity has been overtaken by the political group that joins it. Whether it is the Republican Party of the United States or the Emperor’s court of the Roman Empire, the church loses its influence, power, and effectiveness when the powers of the church join the powers of the state.

Van Steenwyk shows how American Christians have weaponized the Word of God and used it against people. He cites the example of Genesis 1:28 as an example of using Scripture to misuse natural resources. Land should have been developed for the next generation, not for short-term gain (33). He cites other verses which shows consequences of misusing natural resources as a dangerous policy (Isaiah 37:24, Ezekiel 32).

He describes other misuses: the subjugation of nations by a Christian using the fact that everyone will bow to Christ (Philippians 2:9-11), as well as the use of evangelism as a form of conquest (Mark 16:15-16). But it gets worse (43):

Van Steenwyk explores how this imperialization of Christianity functions. He discusses the use of power to promote this imperialization (44-55). Part of this includes making Jesus into someone we like or we can tame, instead of Who He really is (57-63). He explores a faith through the eyes of French activist Simone Weil (68):

Van Steenwyk contends from his personal experience that “Our notion of God can keep us from God. One knows Christ when one lets go of Christ”. One needs to repent of one’s Christianity to follow Christ (70). He makes the point that Christianity is a set of ideas and traditions. Peter and Paul disagreed just as denominations do so today.

Van Steenwyk states that some people will “opt out” by simply rejecting Christianity, or joining some radical Christian enclave, or simply going numb as a response to crushing shame. Instead, we need to repent of Christianity.

By repentance, Van Steenwyk means that we let go of beliefs and structures and institutions and buildings and money and stories—everything that we put upon Jesus—and ask “Is this the way of love?” or “Is this separating me from God and my neighbor?” (77) – what he calls a form of Gelassenheit or “giving up.”

He promotes a mystic approach to Christianity (81-92). Jesus is the UNKing leading an UNKingdom (93-112). This UNKingdom is in opposition to the world system. Van Steenwyk re-examines passages which speak about the relationship between the church and the state (Romans 13:1-7 as well as the anti-imperial statements in Revelation, and Jesus’ words about Caesar in Mark 12:13-17.)

After examining the Scriptures and the premise of his book, Van Steenwyk spends the rest of the book answering the question: “So now what?” In Chapter 7, he suggests a set of spiritual formation practices, which he describes as mystical (115-127). I don’t consider reading the Bible, silence and prayer as mystical. Instead, I consider them useful. In Chapter 8, he returns to the idea of Gelassenheit (128-138). Van Steenwyk suggests deepening our compassion in three ways: (1) localizing our imaginations, (2) paying attention to what is happening in front of us, and (3) learning in the margins. In Chapter 9, Van Steenwyk describes the Holy Spirit as subversive (139-149). He explains that as Christians we need to let the Holy Spirit overthrow us, or turn us upside down. He shares three practices that will invite the Holy Spirit to do this, including: (1) engaging in “open worship” a practice devised from 1 Corinthians 14, (2) naming and resisting, and (3) arguing with Jesus – which isn’t what it sounds like.

Van Steenwyk continues in this abrasive form through the rest of the book. In Chapter 10, he reflects again on the relationship between American Christianity, politics and poverty (150-162). He advocates a form of economic socialism that was devised by God for the nation of Israel. He thinks that America should use the Year of Jubilee as their economic system. He rightly assesses that the church first advocated this form in Acts 2. He embraces the notion of returning to this system. However, asking the rich to release their wealth to give to others will be hard in this political environment. In Chapter 11, Van Steenwyk notes the offensive nature of Jesus’ words to the people who heard them (163-174). He advocates including people who have been shunned, instead of excluding people. He advocates that Christian should so hospitality to those strangers, to be inviting to those who want to hear. He suggests that we should invite people to the “table of Christ”. Although people need to repent, Van Steenwyk rightly states that people first need to be invited, no matter of race, creed, or status in society.

The UNKingdom of God is a good read for those who want to examine their Christian faith from another perspective. Van Steenwyk presents a postmodern critique of the Christian faith. He does not (seem to) advocate a Progressive Christianity. Although there are elements of progressive Christianity in what he describes. I sense that he wants to challenge our beliefs so that we may see more than just the typical American evangelical perspective. Some of what he says is helpful. Much can be dismissed. However, the book is an interesting read for evangelicals who want to continue to share the faith, but are frustrated with the denominational system of Christianity in which they express their faith.

December 28, 2015
Healing Through the Dark Emotions by Miriam Greenspan
Next Post 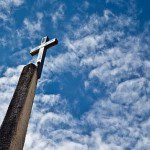 December 30, 2015 Be Ready
Recent Comments
0 | Leave a Comment
Browse Our Archives
get the latest from
Jim Erwin
Sign up for our newsletter
POPULAR AT PATHEOS Evangelical
1