Creation and Fall by Dietrich Bonhoeffer 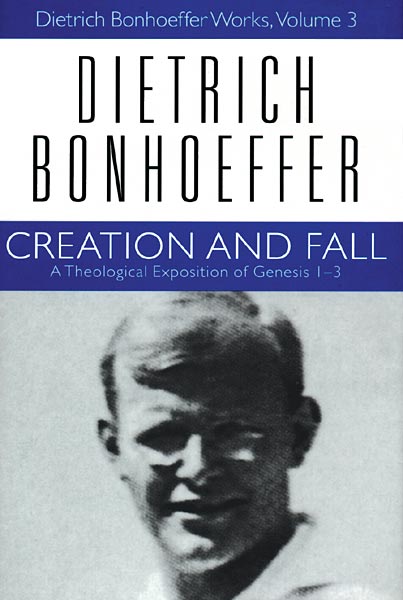 Creation and Fall  by Dietrich Bonhoeffer

The editors of the Dietrich Bonhoeffer Works series share a summary for the reason that Bonhoeffer wrote Creation and Fall (9):

“The denial or downplaying of the Old Testament as scripture by Christians has contributed to a dualistic separation of creation and redemption and of the public and the private spheres of life.”

In his previous works (Sanctorum Communio and Act and Being), Bonhoeffer argued that “Christ exists as community.” In Creation and Fall, he makes a shift in his Christology. He emphasizes that Christ is the “cosmic word of God” and speaks from the center of world history.

Bonhoeffer shares an exposition of the first three chapters of Genesis. As he continues, he reveals much about God’s nature.

As Bonhoeffer leads us through Genesis 1, he shares the relationship between God and freedom. In the first chapter of Genesis we learn the following:

God was being worshiped when nothing else existed (Genesis 1:1-2)

When humans deal with math and numbers, we are engaging in the work of the Creator (Genesis 1:6-10).

God created us to be free “for God,” not for ourselves as individuals (Genesis 1:26-27)

God created us to be free, but we are still dependent – we are created for one another (Genesis 1:26-27)

Freedom is an essential theme in Bonhoeffer’s exposition. Bonhoeffer continues this theme from his earlier works.

“Human freedom is the first quality which constitutes our being like God” (67).

“That God creates by the word means that creation is God’s order or command, and that this command is free” (41).

God creates in complete freedom. Many people speak about human free will. Bonhoeffer makes the claim that God is the first to have free will. We have free will because of God’s freedom in creating us.

“Human freedom for God and the other person and human freedom from the creature in dominion over it constitute the first human beings’ likeness to God “(67).

As Bonhoeffer continues into Genesis 2, he shows that Genesis 1 and Genesis 2 are two sides of the same thing. In Genesis 2:7, the human body comes from the Earth, derived of God’s image – in God’s freedom. The body is not evil, but part of God’s freedom- therefore it is good (76). A human being is a soul and body. God breathed life into humanity with spirit. Humanity is in the image of God in the bodily state.

Bonhoeffer moves from the theme of freedom in Genesis 1 to life and death in Genesis 2. In Genesis 2:8-17, the garden scene is described in pictures, in fairy tale, in mythological terms. We can translate from old picture language of the magical world to the new picture language of the technical world (83). The two trees show that God is at once the boundary and the center of our existence. God’s Grace is the prohibition.

He shows a connecting ring between the tree, the fruit, the man, the woman, and the serpent (95). Bonhoeffer shows how God’s freedom is related to human freedom and sin by making a connecting ring in the events of Genesis 2:8-15.

In Genesis 2:18-25, Bonhoeffer shows how the husband and wife relationship glorifies God (100):

“It is therefore the church in its original form. And because it is the church, it is a community bound with an eternal bond.”

Bonhoeffer warns that sex has been torn from love and turned into an addictive desire that promotes they self and denies the Creator (101).

Bonhoeffer then turns to Genesis 3. Here, he explores the question of evil and the nature of sin. He does this by exploring the question asked in Genesis 3:1-3 (108): “Did God really say?”

Bonhoeffer states that there is evil in this question. It causes us to question God’s authority, and with it, the desire to do His will.

I thought that it is spiritually significant and interesting that on the same day that Bonhoeffer taught about the evil of Lucifer from Genesis 3:1-3, Adolf Hitler was appointed Chancellor of the German Reich.

Bonhoeffer centers his exposition on the contrast between the image of God (Imago Deo) and being “like God” (sicut deus) in Genesis 3:4-5 (112):

When we are “like God” then we are living out of bounds from God’s will, without Him as the center of our lives, and not under His limits. We become self-sufficient without a need for God.

Bonhoeffer shows that because of sin after the fall of creation (Genesis 3:21), it is hard for us to distinguish the light of God from the light of Lucifer (140).

Bonhoeffer continues his exposition into Genesis 4:1, where he makes a few interesting observations:

Cain murdered out of hate, from being “as God” (sicut deus) and not in the image of God (145). Bonhoeffer shows that the events of Genesis 3 are not isolated to just Adam and Eve. The sin nature is passed on to everyone after the first couple.

The book ends again with the quotable Bonhoeffer which I noticed in his previous works (145-146):

“The end of Cain’s history leads to Christ on the cross, the last desperate assault on the gate of paradise.”

“The trunk of the cross becomes the wood of life.”

“The tree of life, the cross of Christ, the center of God’s world that is fallen but upheld and preserved—that is what the end of the story about paradise is for us.”

Like his previous works Sanctum Communio (read my review here) and Act and Being (read my review here), Bonhoeffer challenges the Christian to discover God without the lens of the corrupting surrounding community. This exposition was a refreshing read of the opening chapters of Genesis. If his theme throughout the books he writes is “Christ exists in community,” then this volume gives us an understanding about how Christ can initiate this community among us as Christians, even when we fail Him.

May 31, 2016 How A Leader Prays
Recent Comments
0 | Leave a Comment
"2. Christian integrity cannot be separated apart from a relationship with JesusThen everyone who has ..."
bill wald How to Grow a Balanced Christian ..."
"Grew up near Houston. That explains most of it."
Robert Conner Working Together to Accomplish the Mission ..."
"Good article. The only thing I will say is that the author confused the Sabbath ..."
Junior Daniel 1:1-21 How to Live Life ..."
"Perfect, Jim, Amen -- and such things are of the utmost because when sealed believers ..."
tovlogos Developing Christian Love
Browse Our Archives
Follow Us!