Act and Being by Dietrich Bonhoeffer 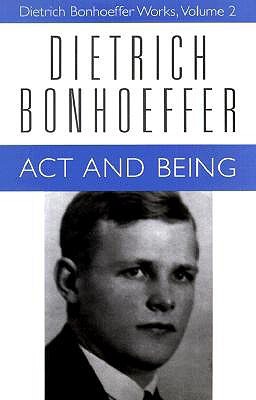 Act and Being by Dietrich Bonhoeffer

Act and Being by Dietrich Bonhoeffer defines its purpose with the subtitle: Transcendental Philosophy and Ontology in Systematic Theology. The purpose may be very complicated. However, Bonhoeffer shows us the purpose of the book with a summary outline of the book (31). Bonhoeffer addresses the interpretation of revelation in Scripture:

“(1) in terms of act, (2) in terms of being, (3) interpretation of act and of being meet and are drawn together, is only understood as the dialectic of faith and the congregation of Christ.”

To confront the philosophies of transcendentalism and idealism, Bonhoeffer calls for an “ecclesiological form of thinking – thinking as the church” (32). The book begins by addressing and confronting these two philosophies which influence culture (not just during his time, but in the opinion of reviewer, also today). Idealism (per Rene Descartes) essentially leads to materialism (40). Transcendentalism (per Immanuel Kant) essentially leads to atheism (44). Bonhoeffer contrasts these two approaches (which promote the self) against what the Bible calls sin (45). Descartes states “I think therefore I am” while Luther states “the heart turned in on itself.”

This contrast is developed throughout the book. In essence, Bonhoeffer speaks to his contemporaries and presents the flaws to their philosophical approach. In today’s terms, one might say that Bonhoeffer presents a way for the church to confront the thinking of the culture. In other words, how to think like a servant in a “selfie” culture. Bonhoeffer makes the important claim that a Christian can only confront and influence the present culture through “Christ existing as community” in the church. This concept was developed in his first book Sanctorum Communio (which I reviewed). Here, Bonhoeffer expands on his thesis and shows how the church should confront the culture.

Bonhoeffer addresses the question of freedom (84-90). The world teaches that I am free. Bonhoeffer counters that God is free (90). Divine election is never a contest between God’s will and man’s freedom. People speak about the difficult theology about election as if God’s will is a burden to man’s freedom. To this “selfie” theology, Bonhoeffer counters with a wonderful explanation about the freedom of God. Of course, he is speaking to people who believe that God is bound to certain expectations about who God is. However, in application, this discussion has much to say to people of the twenty-first century. One cannot put God in a box. God is free to do what He wants no matter what I think about myself or God.

Christ in the church makes the person whole. Sin on the other hand, turns a person in on him/herself. Sin is the inversion of human will in on itself (144). Every self-seeking act is a sinful one. Only the Word of God can truly point us to sin’s nature and how to overcome it.

Following the definition of sin and his analysis of a “selfie” culture, Bonhoeffer shares about how life is like as a Christian – what he calls being “in Christ” (150):

“Seek yourself only in Christ and not in yourself, and you will find yourself in him eternally.”

Being in Christ has two tenses (1) past and (2) future. The past represents life without Christ, and a person uses the conscience which points to Christ (155-157). In the future tense, Bonhoeffer uses the child as a metaphor to explain the Christian life following conversion. Bonhoeffer compares the new creation of a Christian to being a child and that child moves from exile in the world to home in the church community. The child is born from out of the world and enters the wideness of heaven (161).

In the Editor’s Afterword, Hans-Richard Reuter shares insights into Act and Being and its cultural significance. He summarizes the book’s premise: The problem is the demise of religious humanity and a humiliation of Christianity in culture. The solution is revelation as a “form of thinking” was the way to see the solution to the problem (163). The method of argument in Act and Being is deconstructionism (179). Using this process, Bonhoeffer does an excellent job describing the need for the church to be the community intends them to be. He counters the philosophical trends with practical theological points in order to show that the church can influence the culture without being overcome by it. Any Christian who wants to overcome the present-day “selfie” culture should read this book.

December 11, 2014 Emotions of the Harvest
Recent Comments
0 | Leave a Comment
"I am impressed with this interpretation and it is easy to understand. Thank you."
Anne Horst Ahrens Revelation 14:14-20 The Two Great Harvests
"Dear Sir,I've been blessed by reading life-changing messages from these top 10 sources of free ..."
Mike Nkwa Top Ten Sources of Free Sermons
"2. Christian integrity cannot be separated apart from a relationship with JesusThen everyone who has ..."
bill wald How to Grow a Balanced Christian ..."
"Grew up near Houston. That explains most of it."
Robert Conner Working Together to Accomplish the Mission ..."
Browse Our Archives
Follow Us!