The Jihad of Jesus by Dave Andrews 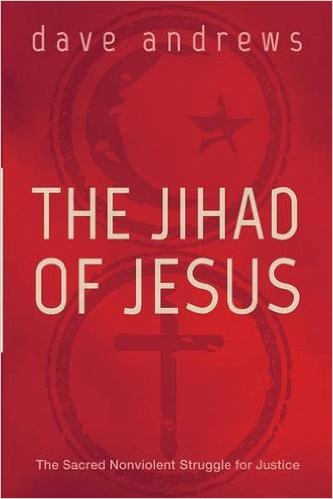 The Jihad of Jesus by Dave Andrews

The Jihad of Jesus by Dave Andrews makes the case for the sacred nonviolent struggle for justice. He opens with the following thesis (xiii):

But it is my contention that—rightly understood—you can’t have one without the other. In spite of the fact this may seem heresy to Muslims and/or Christians, I contend you cannot rightly pursue jihad without Jesus, or rightly pursue Jesus without jihad.

Dave Andrews sides with Ahmad Shawqi and not Reza Aslan for a sacred nonviolent struggle for justice (xiv).

Andrews rehashes the “Holy Wars” debate (5-7) in Part One: The Jihad of Dajjal. Dajjal is the Islamic Antichrist. He also spends considerable time in Chapter 1 going through the evils of Christianity throughout history (7-19), calling them Christian Holy Wars. Citing Niemöller, Andrews believes that the Christians in Germany are to blame for the Holocaust as “the single most powerful cause” of “the worst single atrocity that the world has even known” (20). He shifts his attack from Christians to Evangelicals in particular (20-23). He criticizes the coalitions led by the United States against Afghanistan, Iraq, and at present the Islamic State (23-24).

In Chapter 2, Andrews turns to what he calls the so-called Muslim “Holy Wars.” He shares the important contributions of Muslims to society.

Hospitals for the mentally ill (873 AD)

They contributed to the Renaissance, and the Enlightenment.

Andrews reviews the history of Muhammed and the succeeding dynasties, caliphates, the Ottoman Empire (27-38). He recounts the Armenian Genocide of 1915. Andrews then assesses the violence of the continuing Middle East conflicts. He describes the full historical gamut of conflicts from North Africa to Iran to Syria and the Islamic State (39-53).

Andrews concludes that much of these violent acts are due to authoritarian leaders and societies – both Christian, and Islamic (54-67). He analyzes spiritual perspectives of these evil acts (67-78).

In contrast to Part One, Andrews introduces the Jihad of Isa in Part Two.  Isa is the Islamic name for Jesus. Andrews contrasts the choice of Barabbas (an extremist) with Jesus called Christ. The Spirit of Barabbas glorifies violence. The Spirit of Christ is true, love, peace, and life. Andrews wants to show how we can make the shift from violent jihad to a non-violent struggle.

In Chapter 4, Andrews tries to show how one can reframe “Jihad” as a method of nonviolent struggle. He shares how difficult this can be. It is normally healthy for humans to be conscientious objectors. Unfortunately, soldiers and terrorists are systematically socially conditioned as killers.

In Chapter 5, Andrews seeks to reclaim Jesus as a model of nonviolent struggle from the Islamic context. He examines Jesus’ words in the Gospels about violence (Luke 22). He advocates nonviolent sacrificial compassion. He describes how different religions (like Christians and Muslims) can relate to one another.

In Chapter 6, Andrews recollects strong but gentle nonviolent struggles in the past. He cites Francis of Assisi, Badshah Khan, Leymah Gbowee, and Muhammad Ashafa. Andrews concludes with the notion that the jihad of Jesus is to the struggle to incarnate the kingdom of Heaven on Earth (153). This includes giving us the choice to be the change we want to see. Andrews shows that there is both the positive and negative examples from Luke 6:20-25. The greatest example is what Andrews calls the Good Samaritan/Christian/Muslim (158-160). He ends by encouraging what Jesus says to the reader: “Go and do likewise.”

Andrews tries very hard to encourage peaceful co-existence between Muslims and Christians. He makes a case for Jesus who is nonviolent. Essentially, he is advocating that Jesus encourages Christians to live out their faith with a view of love and not violence. He makes an important contribution this cause. His book is full of footnotes to reinforce his belief. Andrews is critical of evangelical Christians and at the same time justifies Islamic jihad. He puts the onus on Christians to promote a nonviolent faith. Andrews is a Christian anarchist. As such, this book would help people of different faiths to understand one another. We live too often in fear of people of other faiths, and this book would help counteract this.

Your Child Won't Be a Pro...
Ponder Anew
Related posts from Jim Erwin