The Atonement of God by J.D. Myers 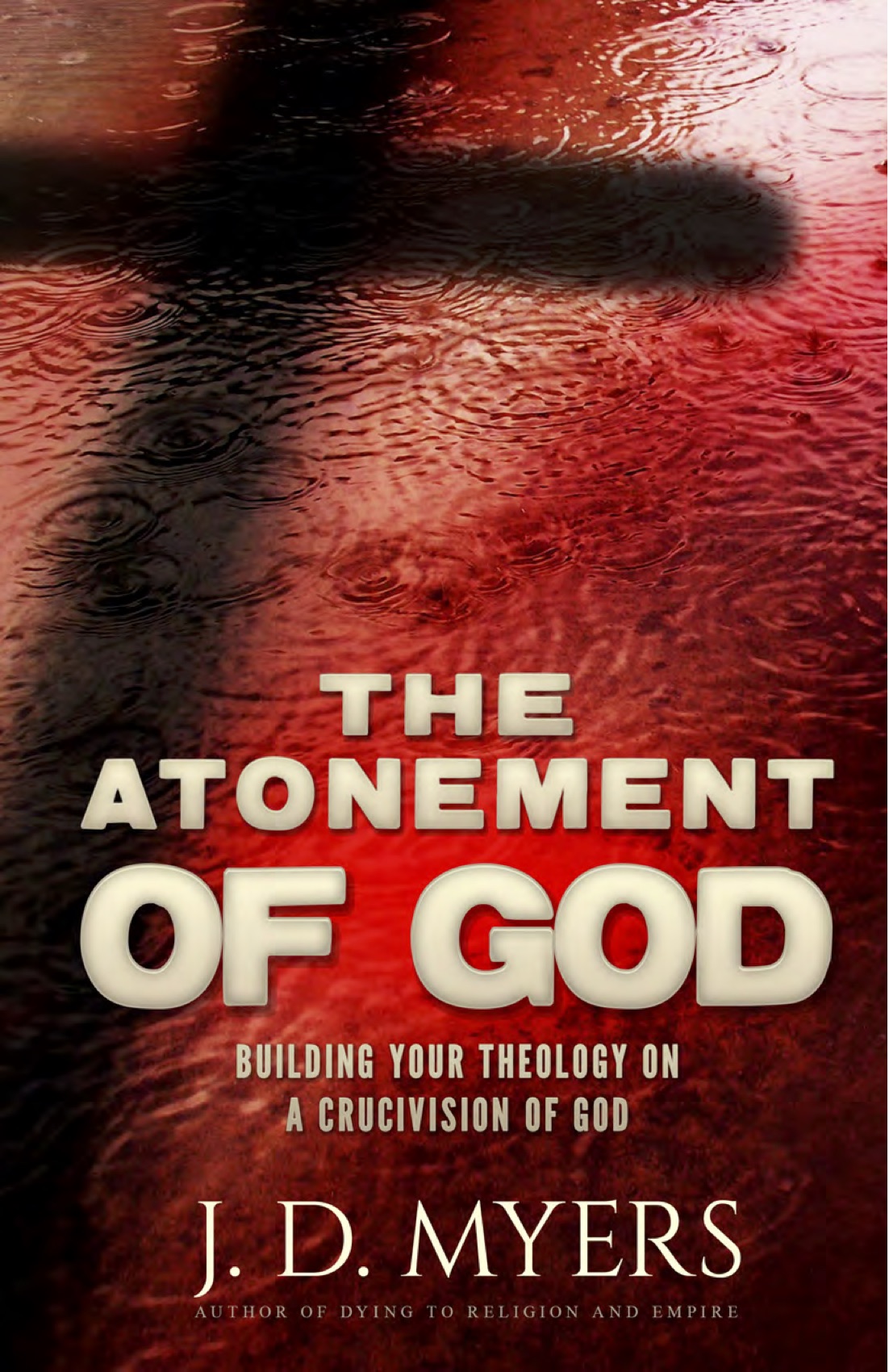 The Atonement of God by J.D. Myers

The Atonement of God by J.D. Myers is a book that shows how to build your theology on the crucivision of God. Myers promotes a non-violent view of the atonement. He promotes a form of the Christus Victor view. He analyzes the penal substitution, the moral influence, and the ransom views of the atonement. He rejects all three and then promotes his own view.

THE THREE GREAT LIES OF SIN

2. Sin disgusts and offends God so God stays away from us.

3. God demands a repayment for a debt of sin.

God is angry of our sin. It does disgust God. He does demand repayment. Yet, Myers makes the case that Jesus exposed these lies (49):

Jesus defeated sin by emptying it of its deceitful power over humanity. He taught us and showed us that God is not angry with us about our sin, but has always loved us. He showed us that the reason God wants us not to sin is not because God is disgusted by sin, but because we are damaged and hurt by sin, and God does not want those He loves to be hurt. Furthermore, God showed us in Jesus Christ that there is nothing we can do and nothing He wants us to do in order to repay Him for our sin. There is no debt of sin which is owed to God. He forgives us, loves us, and accepts us freely, by His grace.

The primary thought that Myers suggests that comes from his non-violent view of the atonement is (55): “Sin leads to death, specifically the death of others at our hands.”

Myers shares his definition of the Gospel (57): “The gospel…is not ultimately about the exchange of victims, but about the ending of bloodshed.”

Myer gives a valid psychological explanation for blaming God about His violence (57). We want people dead, but we blame it on God. Jesus revealed the heart of God and the heart of man on the cross (58). Myers correctly links Satan’s work of accusation with eventual blame and violence (60).The impulse to kill others comes from Satan and not God. Myers provides an excellent explanation as to why God forbade Adam and Eve from eating the fruit of the Tree of Good and Evil: we don’t know everything like God does. We don’t have omniscience. This lack of knowing gives way to mistakes that God would never make (60). We make bad judgments. God does not. When humans make bad judgments, there are serious consequences.

Myers claims that it is Satan, not God, who demands punishment for sin (61). Satan tells us the lie of sin which is that God is angry at us because of our sin (64). Myers states that the lies we believed were exposed by Jesus through the crucifixion and resurrection. This reveals that we are victims of these lies as well as victimizers (66).

Myers then makes an important statement about the role of the church as challengers and critics of the governments of the world. To the degree that we accomplish this effort, the salvation becomes less military and more corporate. If Christianity loses its influence to critique the government’s actions, individualistic salvation becomes the norm. (68)

Myers gives the best reason why one can subscribe to the non-violent theory and still have the benefits of the penal substitutionary view. I like the way he has presented this (71):

Since, in Non-Violent views, all of humanity is a victim to the lies about sin, God, and justice, Jesus entered into the role of victim so that He might become one of us and also expose to us our tendency to accuse and blame innocent victims. Jesus substituted Himself for every victim, to show us that He is with us when we are victims and also to show us the illegitimacy of victimizing others.

Yet in contrast to Penal Substitution, a Non-Violent view is able to say that Jesus died in our place, not to satisfy the demands of an angry God, but rather to reveal God’s complete love and solidarity with mankind by allowing the full outpouring of wrath from sin, death, and the devil to fall upon His back instead of upon ours. In this way, we still get the substitutionary offering of Jesus—which is the strength of Penal Substitution—but are able to avoid the objectionable idea that the wrath which came upon Jesus was from God.

While Jesus was our “substitute,” He did not die to satisfy God’s wrath. His death was not penal, that is, there was no punishment involved. God was not angry. God was not demanding blood. God was not withholding forgiveness until He got paid for sin. A Non-Violent view of the atonement embraces the strengths of Penal Substitution while avoiding its weaknesses.

TEN BENEFITS OF THE NON-VIOLENT VIEW OF THE ATONEMENT

4. Reveals the truth about sacrifice.

Myers addresses the wrath of God in Appendix 1. He has to address this doctrine because the Bible promotes this doctrine as essential to the nature of God, especially upon the return of Jesus and the beginning of eternity (162). Myers admits that there are legitimate objections to the non-violent theory of atonement from Romans, the view of hell and the violence of Revelation. However, he states that he plans to answer them in another future volume (162). I look forward to his answers.

Myers also answers the question “Does forgiveness require the shedding of blood?” In Appendix 2. He analyzes Hebrews 9:22 and makes the case that Hebrews 9:22 does not require bloodshed for forgiveness (190). The death of Jesus on the cross was not to purchase forgiveness from God for humanity. Instead, it was to show that God was forgiving to us from the beginning (190).

Myers makes it clear that just because God forgives everyone, it does not mean that he is a universalist. In other words, one must still receive the righteous of God in Jesus, even if God forgave everyone (191).

Here are some closing thoughts I have concerning this book:

If Genesis 6:13 says that the world was filled with violent and Myers states that God is not violent, but that we are, then why does God decide to destroy the world by a flood in Genesis 6:5? If the flood is not God’s violent redemption for eight people, then my question is: what was the purpose of the flood? Why did it happen? (140) Myers poses the problem, but can never provide satisfying answers to these kinds of dilemmas in the Bible. Is this perhaps a limitation of the non-violent theory of atonement?

Myers shows that God continues to show violent tendencies in the Old Testament that cannot be explained under his non-violent theory of atonement. For example, Sodom and Gomorrah, the Plagues upon Egypt, and removing the evil Canaanites from the Promised Land by violence (140). His “myth of redemptive violence” that he says others promotes cannot be explained away.

The most serious critique of this non-violent view is that Romans 3:25 teaches that Jesus died on the cross and took God’s wrath upon Himself. The stories of the temptation, the flood, the fire and brimstone happened and were directed by God, even if they show humanity’s desire for violence (141).

Myers never states that Hell should be restorative. However, he clearly questions whether God (who Myers clearly shows earlier is forgiving even when Jesus is on the cross) can send everyone to a Hell that punishes people because of their sin (141). Even Myers does not have all the answers with this non-violent theory of atonement. Is it because he cannot explain away Hell because of the Scriptural evidence of such a hell? (141).

Again, Myers can only explain the violence in the Old Testament as something that says more about humanity than something that God does. (What about the time when God commanded Saul to kill everyone and destroy everything in 2 Samuel 16?) Is God not violent then? Is He not the Father of potential genocide against the Amalekites? Myers never addresses this portion of Scripture (143).

September 11, 2016
We Need Fewer Superstars and More Servants
Next Post

September 18, 2016 Genesis 18:1-33 Prayer and God's Blessing
Recent Comments
1 Comment | Leave a Comment
Browse Our Archives
get the latest from
Jim Erwin
Sign up for our newsletter
POPULAR AT PATHEOS Evangelical
1