Vote Your Conscience by Brian Kaylor 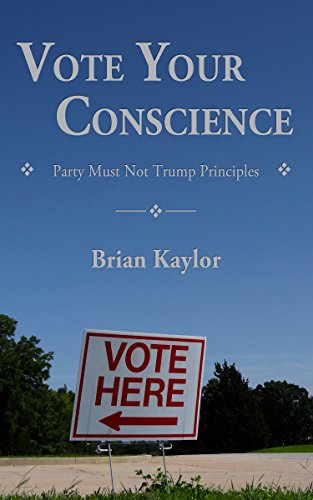 Vote Your Conscience by Brian Kaylor

Vote Your Conscience by Brian Kaylor is a book that encourages people to not let party trump principles. This book was written as a guide for the 2016 election. The main thrust book is to encourage Christian to vote their conscience, and not just follow party politics. The audience in general, is the voter, but specifically, Kaylor addresses the Christian evangelical voter.

Kaylor addresses the moral dilemma of choosing between Hillary Clinton and Donald Trump. He makes the case against voting for Hillary Clinton by showing that she has the following problems: (1) unethical governance, (2) rejection of the sanctity of life, and a (3) hawkish foreign policy. Kaylor then turns to Donald Trump and shows how he is just as an immoral choice. He states the following problems about Donald Trump: (1) vulgar misogyny, (2) religious bigotry, (3) promotion of violence, and (4) authoritarianism. It is this authoritarianism for which Kaylor has a real concern. While addressing Trump’s love for authoritarianism, Kaylor cites how Robert Jeffries (pastor of First Baptist Church Dallas) and Jerry Falwell, Jr. would rather have a “strong leader” than follow Jesus and His teachings. Kaylor shows how evangelicals are willing to accept an authoritarian like Donald Trump because they want to have political influence and power. Kaylor states that he himself will vote for a third-party candidate during this election. Yet, it is clear that Kaylor dislikes that his own “tribe” prefers the Republican candidate, even when that candidate does not fit the values that evangelical Christians wish to have in a candidate for president.

Kaylor addresses the hypocrisy of the Republican establishment nominees, as well as evangelical Christian leaders. Kaylor specifically names Mike Huckabee, Ralph Reed, James Dobson, Franklin Graham, Ann Graham Lotz, and Jerry Falwell, Jr. as people who have allowed party politics to trump principles. The point that Kaylor makes very clearly through examples is that evangelical Christians are willing to put their prophetic voice aside in order to be “in bed” with the Republican Party.

Kaylor strives to let the Christian voter know that their role in this 2016 election (as well as any election) is to be a prophetic voice to the government, not a political puppet of the government. He warns of the dangers of letting the political party influencing the church. The following quote by John Danforth summarizes this thought:

“We have a strong inclination to let our politics determine our faith rather than the other way around,” “When we vest our personal opinions with the trappings of religion, we make religion the servant of our politics. By confusing faith and politics, we become transformed to this world.”

Kaylor takes the reader through a brief of the connection between religion and politics in America. He then contrasts this with examples from the Bible. He shows how the Old Testament influenced the government without being beholden to it (Jeremiah 3:16, Jeremiah 6:13-14, Psalm 106:39, Hosea 9:1, Ezekiel 16:16, Ezekiel 16:32-34, Isaiah 1:21). He also shares how Jesus called the church to influence the political culture. Kaylor shows how Jesus was tempted by the power of political influence (Matthew 4:8-9). He warns of the dangers of this temptation today. Kaylor shows how the Bible encourages the church to embrace immigration (Leviticus 19:33-34, Deuteronomy 10:18-19, Psalm 146:9). Yet his main focus is for evangelical Christians to think independently of their leaders concerning this election. Taking his cue from Ted Cruz, Kaylor comes to the pulpit and challenges people to “vote their conscience.” He ends his book by describing practical ways the church “can be the church” during this election. Kaylor describes five actions the church can take: (1) vote your conscience, (2) gently rebuke, (3) craft alternative messages, (4) study the Bible (and the news), and (5) election communion.

Kaylor has written a book that every Christian needs to read before they vote in this election. One may disagree with some of the concerns which Kaylor addresses. However, I believe this book will help the reader make a better-informed decision before they vote.

You can also read  my review of Brian Kaylor’s book Sacramental Politics,.

Disclaimer: The views expressed in this book review are the views of this author alone, and do not necessarily reflect the views of the Missouri Baptist Convention.