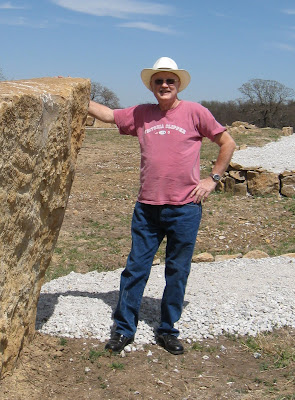 James Stevens died earlier today after a long, painful battle with cancer. We who counted him as a friend are sad to lose him, but we’re thankful he’s no longer in pain.

The thing I’ll remember most about James is his generosity. He opened his land to Pagans, motorcycle enthusiasts, historical re-enactors, and just about anyone who asked. He didn’t just let us use his land, he improved it for us, mowing it, building picnic tables, and of course, dragging up brush and dead trees for firewood. His lasting gift to the community is Summerlands, the stone circle and ritual area.

James had a quiet spirituality about him. He wasn’t big on ritual, but he had a great love for nature. And he loved the stone circles and other sacred sites of the British Isles. I remember the enthusiasm in his voice as he described his trip to Newgrange, and his hope that he’d win the lottery to be inside on the Winter Solstice.

James was a much-beloved member of our CUUPS group. He loved having us camp at his place, but he didn’t just wait for us to come to him. It’s about 70 miles from his house to mine, but he made the trip for our cookouts – and he brought beer too! He didn’t make it to church all that often, but he was a faithful supporter of DUUF.

James asked for a Pagan funeral. David Sparks (whose pastoral care was as strong as any professional minister’s) will lead the ritual at a time of the family’s choosing.

James, may the Goddess and God welcome you into the Summerlands and grant you peace and freedom and reunion with those who have gone before. Know that you will live on in the hearts and minds of those of us who were privileged to be your friends.

June 17, 2010 Egyptian Summer Solstice
Recent Comments
0 | Leave a Comment
Browse Our Archives
get the latest from
John Beckett
Sign up for our newsletter
POPULAR AT PATHEOS Pagan
1

Pagan
Why You Should Care About Theological Debates
John Beckett