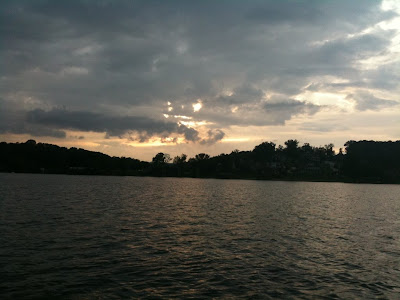 Sunset over Chickamauga Lake in Tennessee

This will be the first in an occasional series on spiritual practice techniques. It’s flowing out of the spiritual practice workshop I led at this year’s Druid Gorsedd and the Intermediate Pagan Practice class Cynthia and I led this past weekend. I’ll be repeating the workshop at the DFW Pagan Pride Day on September 11.

I used to be a runner. Injuries and weight gain (a chicken-or-egg thing) forced me to stop several years ago, but I’ve maintained the practice of exercising early in the mornings before work. As a result, I’m outside at about the same time several times a week. This makes it easy to follow the Sun and the Moon as they move through the seasons and through the year.

As children we learn that the Sun rises in the East and sets in the West. But not exactly – it only rises in due East (90° on the horizon) and sets in due West (270° on the horizon) at the Equinoxes. At the Summer Solstice it rises toward the North: 61° where I live. In higher latitudes it’s even further towards the North: 47° in Dublin, Ireland. In the Winter the opposite is true – the Sun rises toward the South. And the Sun rises earlier in the Summer and later in the Winter. Here in Texas that’s only noticeable for the weeks on either side of the Solstices, but again in higher latitudes the changes are far more pronounced.

This is elementary-grade science, and I’m sure I was taught this in school at one point or another. But until I started watching the Sun rise and set every day, I didn’t connect with it. Once I did, I began to do a better job of connecting to the rest of Nature, and of understanding the significance of Stonehenge, Newgrange and other ancient sites oriented toward the skies.

Following the Moon is even more dramatic. It rises about 50 minutes later every day and its face changes noticeably through the month. Plus the point at which it rises and sets moves from North to South and back again like the Sun, but instead of taking a year to complete the cycle, it does it during the month.

The Full Moon is amazing but so are other phases: there’s Diana’s Bow, the sliver of a crescent that first appears just after sunset at the New Moon. There’s the pregnant waxing gibbous, growing toward fullness. Yesterday as I drove West to church I had the waning gibbous Moon in my vision for most of the trip. And the waning crescents (just before Sunrise) around the Equinoxes produce the Horns of the Moon.

I’ve heard it said that Pagans should never need an almanac (or a computer) to know when and where the Sun and Moon will be on any given day – we should feel it in our souls. That statement strikes me as just a little Earthier-than-thou, and it’s certainly easier to keep up with them if you live in a place where the skies are usually clear, but following the Sun and Moon is one of the simplest and most effective ways to stay connected with Nature.

To begin a Pagan spiritual practice, go outside and look up!