I spent today at Sacred Journey UU Fellowship in a workshop on magical tools led by Phaedra Bonewits. Phaedra is perhaps best known as the widow of Isaac Bonewits, which is unfortunate since she has an impressive magical resume on her own – including a term as Vice President of the national CUUPS Board of Trustees.

I have the usual assortment of magical tools. Some (like the athame I rarely use any more) I purchased in the early days of my Pagan and magical exploration, while others have been acquired as the need for them arose. I don’t use many tools in my personal practice, but they are very helpful in public rituals.

Magical tools are props – the title of Phaedra’s handout for this workshop was “Propping Up the Magic.” They help focus and intensify the work of the magician and/or priest. With use, they become psychological triggers, helping you to rapidly shift into an altered state of consciousness. They also provide visual cues to other ritual participants, helping them to see what’s being done as well as hearing it.

This workshop covered the tools traditionally corresponding to the four elements.

Air – the sword or athame, a tool of the intellect. The world is often messy and gray, but there are times when we need boundaries. Blades draw limits.

Fire – the wand or staff, a tool of the passions. Staffs bar – they stop entry. They also serve to direct power.

A lot of people (myself included) tend to use wands and athames interchangeably. In traditional Wicca, it’s the athame that does the heavy lifting – wands get little use. We had an interesting conversation on whether or not younger generations – raised on Harry Potter and its emphasis on wands – would reverse that trend.

Water – the cup, chalice, or cauldron, a tool of the emotions. Cups hold things, they give structure to the amorphous. Phaedra quoted William Gray, who said “the cup is both a holder for the passive and an arena for the active.”

Earth – the pentacle or shield. I’ve always seen the pentacle as the tool of Earth (though I use a stone on my own altar), but according to Phaedra, traditional ceremonial magicians use a shield, a much larger object. Shields protect, they form a solid boundary.

Phaedra cautioned us to be wary of choosing tools because they’re pretty – the main thing is that they work. But if you’re in a big group, break out the big eye-catching stuff! I love my Druid wand, but it’s a piece of religious art. If I’m going to be doing serious work, I’ll grab the older, simpler wand every time. And if I’m going to be casting a circle in an outdoor ritual, I’ll use my five-foot staff.

While the old saying that “the only tool a witch needs is her body” is still true, magical tools make ritual easier and stronger – and more fun. Learn to use them well. 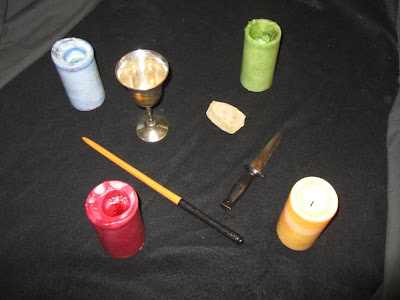