Doing Something About the Weather

Doing Something About the Weather August 2, 2011 John Beckett

It’s hot. It’s August and I live in Texas – it’s supposed to be hot. This Summer, though, is different. Dallas – Fort Worth has had 32 straight days of 100 degrees or more. The average is only 16 per year, and the all-time records of 42 straight 100 degree days and 69 total are looking reachable. Other regions are also seeing extreme – and deadly – heat.

Everybody’s talking about the weather. But Mark Twain (or whoever originated that quote) was wrong – we are doing something about it. We’re adapting.

Sometimes we adapt by changing our environment. The most obvious adaptation is air conditioning. It is no coincidence that the South and Southwest were sparsely populated until air conditioning became commonplace. Air conditioning allows us to live through near-record heat mostly unaffected – at least those of us who work indoors.

If we can’t adapt our environment, we adapt our behaviors. People lived in Texas – and in places much hotter and drier – for centuries before air conditioning, and they still do. They stay out of the Sun, especially in the heat of the day. They wear light, loose clothes. They carry water, and they learn where to find more. 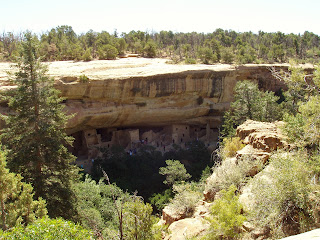 The Ancestral Puebloans of Mesa Verde (in southwestern Colorado) built their houses in the cliffs, where they are shaded for most of the day. They collected water and and grew a few dry-weather crops. They lived there for 700 years, but when their environment became too unfriendly (it is speculated that the climate changed from “dry” to “too dry”) they adapted again – they moved.

How many Pagan rituals have you attended (especially at the Equinoxes) where the main working was for “balance”? Balance is a good thing – we need a balance between work and play, between bright and dark, between mercy and severity. But too frequently we speak of balance as though our goal is the achievement of some perfect state where we can remain forever and where change is no longer necessary.

This is not what Nature teaches.

It is not the strongest of the species that survives, nor the most intelligent. It is the one most adaptable to change – Charles Darwin

August 6, 2011 My Response
Recent Comments
0 | Leave a Comment
Browse Our Archives
get the latest from
John Beckett
Sign up for our newsletter
POPULAR AT PATHEOS Pagan
1