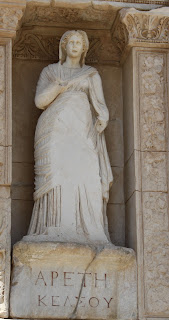 Yesterday I ended with the question “what do the goddesses and gods want from us?” I suppose I should apologize for the tease because that question, as stated, is absurd. It’s about as absurd as men asking “what do women want?” as though women are some monolithic group who all want the same thing.

The old gods and goddesses have different interests and different areas of responsibility. Even those who occasionally collaborate or at least conference (such as the twelve Olympians) were never known to be working toward the same ends.

The question “what do my gods and goddesses want from me?” is another matter entirely.

I know some Pagans who say they are slaves of their gods. A deity claimed them and that was that. Their choice was to cooperate or be punished like a recalcitrant slave. Their free will has been taken – they do what they’re told, plus nothing minus nothing.

I make no comment on this arrangement except to say this has not been my experience.

Others say we are servants of the gods. They are older, stronger and wiser than us, therefore the natural order of things is that we should serve them. I have never called myself a servant, but I am a priest and I have described priests and priestesses as servants of the gods. As a priest it is my duty to commune with my gods in meditation and prayer, to make the offerings they require, to tell their stories and present them to the world. That is service, and it is service I willingly and eagerly perform.

But is that all they want? Wine and incense and prayers and praise? The gods and goddesses I worship are a pretty confident bunch – while we all like to hear others say nice things about us, they don’t need any of that. The wine and incense and prayers and praise are for my benefit, not theirs. They keep me connected to Cernunnos and Danu (to whom I am pledged as a priest), to Morrigan (who has taken a strong interest in me even though she hasn’t called me to her priesthood), to Isis and Osiris and Horus (who I serve every year at Summer Solstice) and the other goddesses and gods I encounter in story, ritual, meditation and in the wild.

What they want is for me to become more like them: more creative, more nurturing, more protective. More passionate and more loving. Stronger and wiser. More involved with the rest of Life because – like the gods – I recognize my connection to all of Life.

In his “Letter From A Birmingham Jail” Dr. Martin Luther King, Jr. said “Human progress never rolls in on wheels of inevitability; it comes through the tireless efforts of men willing to be co-workers with God.” Dr. King was writing from a Christian perspective, but the meaning is universal. If anything, this idea fits polytheism better than monotheism – an all-powerful God would have no need of co-workers, but gods and goddesses of limited power do.

There are things the gods want done and they need people to help accomplish them. And they don’t just want laborers to do the grunt work – although hard, dirty work is still necessary. They also want people to learn and grow and become more god-like themselves.

I’m not acquainted with Odin or Yemaya or Dažbog. Perhaps they want something totally different from their followers.

I’m called to do the work of my gods, and to become more god-like myself.

Now if you’ll excuse me, I have work to do. A lot of work.

September 23, 2012 Anger
Recent Comments
12 Comments | Leave a Comment
"I find this situation odd. I don't understand why a person would leave a mainstream ..."
Mercurial Delish A Reflection on a Blogger Leaving ..."
"Man tbere r people in turmoil in the world there r men on the yellow ..."
Govinda Kanha Sarkar Enough With the Mabon Hate!
"As much as I've shown annoyance with Celtic/Wiccan holiday names before...all I can say this ..."
Ingeborg Nordén Enough With the Mabon Hate!
"Excellent read as usual. I especially agree with the idea that we are ADULT children ..."
Lori Wangerin 5 Things I Had to Unlearn ..."
Browse Our Archives
get the latest updates from
John Beckett
and the Patheos
Pagan
Channel
POPULAR AT PATHEOS Pagan
1