The Church, Orlando, and Love Without Qualification 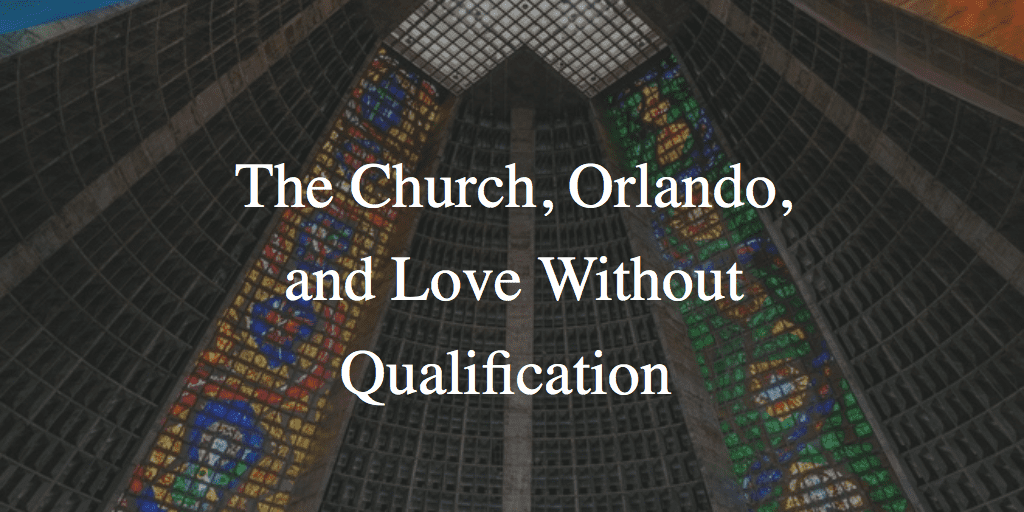 I was off the internet all of last week. My family and I were camping in Arkansas sans computers or cell phones, and all I knew before unplugging Sunday after church was that there had been some kind of tragic attack in Orlando that appeared to be fueled by hate.

By the time I plugged back in this past Sunday, I was surprised and saddened to see all the different narratives that have come out of this tragedy. It is a reminder for me how fundamentally divided Americans are, and how moments of solidarity and collective mourning have given way to political opportunism (by everyone).

But there is another way.

In his great book, FutureVille,  the Christian author Skye Jethani tells about being in a meeting that happened a few years back between religious leaders and the LGBT community.

Jethani participated in two days of talks with the hope of both groups being able to understand the other better.

And here’s what he said about those two days:

The anger and wounds displayed by both sides at the off-the-record gathering were not merely a result of holding different convictions on a complicated issue. The worst damage was the result of seeing the other group as the barrier to creating the “right” future for the country. It was never said explicitly, but the message was clear: the future of our society would be brighter if you were not a part of it….Words like bigot, ungodly, depraved, and homophobic were mentioned as leaving deep and lasting wounds by both sides. Decades of anger and scars came out into the open… The name-calling and dismissive labels used by each side were deemed justifiable because those on the other side were the “enemy”; they were to be defeated with overwhelming political, cultural, and economic force to achieve a “greater good.” After all, if the other side won, progress (however each side defined it) would be lost. What both sides of the culture war forget is that when we label another person or group as the “enemy” because they oppose our vision of the future, we also reduce their value. We diminish, at least in our eyes, some of their God-given worth by viewing them as objects to be removed rather than people to be loved. Whenever we diminish the value of people created in God’s image, we cannot be moving closer to Shalom.

The most heartbreaking sentence to me in there is “Both sides believed that the future would be brighter if the other group wasn’t a part of it.”

But there is another way.

Remember a few years ago when the Chick-Fil-A “event” happened? The founder and C.E.O. of Chick-Fil-A, Dan Kathy, had made a comment in an interview supporting the traditional definition of marriage. In a matter of a few hours, the world had been divided up into people who were for love and people who ate at Chick-Fil-A, or we carved it up as people who stood for truth and those who wouldn’t eat there.

We carved up the world into the question, “Which side of the Chicken biscuit are you on?”

But that didn’t work for Dan Kathy or Shane Windmeyer.

In the middle of all the controversy, Windmeyer received a phone call from Dan Kathy. He took the call very cautiously, sure it was going to be some tactic to escalate the situation. Windmeyer, an openly gay man and founder of the LGBT program “Campus Pride” found himself talking to a man who was actually kind and curious about his perspective.

Before the phone call, they each were enemies, and a few weeks later they both found themselves as friends.

Both men, at great risk to their reputation in their respective communities, reached past the talking points and sound bytes and found a way to re-humanize each other. They found a way to realize how much they have in common, without pretending like they didn’t have significant differences.

Windmeyer wound up saying that he started to see Dan Kathy the way he does his own uncle, the Pentecostal Preacher. He knows his religious views aren’t supportive of his lifestyle, but in all his years he’s never doubted his uncle loved him. And so when Dan invited Shane to the Chick-fil-a bowl a few weeks later, he went.

So this past week, Scot McKnight posted the official statement from the Arch Bishop of Canterbury responding to the horrors and the victims family. Here’s what he said to the Anglican Church:

“After Sunday’s attack in Orlando, as Christians we must speak out in support of LGBTI people, who have become the latest group to be so brutally targeted by the forces of evil. We must pray, weep with those affected, support the bereaved, and love without qualification.

The obligation to object to these acts of persecution, and to support those LGBTI people who are wickedly and cruelly killed and wounded, bereaved and traumatised, whether in Orlando or elsewhere, is an absolute call on our Christian discipleship. It arises from the unshakeable certainty of the gracious love of God for every human being.

Now, in this time of heartbreak and grief, is a time for solidarity. May God our Father give grace and comfort to all who mourn, and divine compassion to us all.”

“This is an absolute call on our Christian discipleship.” Full stop.

Jesus followers are called to love without qualification, and the fact that the Arch Bishop even had to say that sentence shows how politicized our Christian imaginations have become.

If the Church is going to be the body of Christ we can’t allow ourselves to act/think/give the impression that there is a single group of people who we think the future would be brighter if they weren’t in it.

When we allow that narrative to be the dominant one between the Church and the LGBT community than tragedies like Orlando only pour salt in an already painful wound.

Our words of solidarity ring hollow and insincere without relationships that are deep and real and filled with genuine love and affection for those who are hurting.

So pick up the phone and call someone who the culture thinks is your enemy, tell them your in their corner and that you’re glad they are alive.

It is a time for solidarity and not for sermons.

So back to Shane Windmeyer and Dan Kathy. After a few months of knowing each other’s hopes and dreams and genuine communication between people on opposite sides of a polarizing issue, the most miraculous thing happened. Windmeyer came out of the closet as Dan Kathy’s friend.

In his wonderful article at Huffington Post, Windmeyer says this:

[We were] sitting down at a table together and sharing our views as human beings, engaged in real, respectful, civil dialogue. Dan would probably call this act the biblical definition of hospitality. I would call it human decency…

Image from Pablo with Author Modification 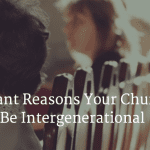 June 20, 2016
3 Important Reasons Your Church Needs to Be Intergenerational
Next Post

June 22, 2016 There Are No Ordinary People
Recent Comments
0 | Leave a Comment
Browse Our Archives
Related posts from Jonathan Storment