Will Byers loves Dungeons and Dragons.

He and his 2 best friends play it all the time. And they don’t just play it, they believe it.

They carry Dungeons and Dragons over into their reality, the way they talk about their day to day lives, and the choices that they make on how to live them.

So much so that one day, after a rigorous game of D&D, Will is biking along and he sees something creepy and mysterious and he decides to do in real life what he had failed to do in the D&D game that he had just lost.

And that’s when the monster grabs Will Byers.

So starts Stranger Things. The phenomenal new Netflix show that everyone seems to be talking about, and is frankly one of the best things I’ve seen on TV in years.

I want to start a series today about Stranger Things, not so much about the story or the characters, but about why I think we loved this show so much, and to this end I want to talk about a couple of books that I’ve read over the past few months that I think shed some light on why we would tell a story like Stranger Things, and why it’s resonated so much in culture.

They both shed light on why we, as a secular society, are telling the kinds of stories that we do and what those stories say about us and our deepest hopes and desires.

Because here’s the thing about Stranger Things, what those boys did with Dungeons and Dragons, I did with the show itself.

I wanted Stranger Things to be true.

Stranger Things was, in some sense my religion, or as a Christian, I would say it was tapping into some fundamental truths about my religion.

These days the word religion has fallen on some hard times, and so to hint around that a wonderful show like Stranger Things belongs in the same category with religion is probably disturbing for some.

You don’t drink that Koolaid, and you don’t appreciate the suggestion that you do.

But here’s where Dark’s book is so helpful. Religion according to Dark is just a way that you’ve come to make sense of the world, and everybody’s got a religion, to pretend that you don’t is to try and step outside of the human condition to analyze and dissect all of those “strange people” who think “strange things” without regard to the real possibility that your own ideas might not be able to bear the weight of much scrutiny, and yet you believe them anyway.

I think Dark’s book is incredibly helpful resource to facilitate conversations between Christians and non-theists, and really everybody.

Because he’s right, life is too short to pretend you’re not religious.

Here’s what he means by that:

Why do I insist on framing the conversation this way? I’m in it for beauty. As someone who has dared to try to teach people for most of my adult life, I often suspect that what I’m up to is, in large part, an effort to try to stop people from becoming bored and giving up too soon, to help them find their own lives and the lives of others powerfully interesting, weird and somehow beautiful. Look again, re-spect, stay with me and consider the possibility that there might be more going on in a neighbor, a novel, an image or an issue than your mind grasped the first time around, something worthy of your time, something beautiful…What manner of devotee art thou? What’s the what, the how and the why of your day-to-day? Let’s hold our devotions out with open hands. Or as Leonard Cohen so memorably puts it, let us compare mythologies.

Because the mythologies may differ wildly, but there’s a chance that they overlap in some ways and you may find yourselves having more in common than you think with someone you previously had written off. There’s a chance that you might have a religious affinity over Stranger Things with someone that you share little else in common with, and that is the power of a mythology.

Dark makes this point relentlessly in his book, because he thinks the way we’ve approached religion is all wrong.

And maybe he’s on to something. After all, for a word that literally means to reconnect, religion seems to be about the most divisive thing that we can talk about today.

Religion draws lines and keeps people out right? Religion is for people who fly planes into buildings or who commit mass-suicide wearing weird tennis shoes or who go door knocking and pass out pamphlets.

But to define it this way, is not only short sighted, according to Dark, it’s helps us dehumanize one another:

Here’s what I‘m up to. I come to you as one bummed out by the way people talk about religion. Be it an online rant, a headline, a new report or a conversation overheard, I feel a jolt of sympathy pain whenever someone characterizes someone else as religious. It’s as if a door just got slammed. A person has been somehow shrink-wrapped. some sweet and perfectly interesting somebody gets left out. And in a subtle, hard-to-get-a-handle-on kind of way, it’s kind of like someone’s been told to shut up…This is why it often seems to me that calling someone liberal, conservative, fundamentalist, atheist or extremist is to largely deal in curse words. It puts a person in what we take to be their place, but it only speaks in shorthand. When I go no further in my consideration of my fellow human, I betray my preference for caricature over perception, a shrug as opposed to a vision of the lived fact of somebody in a body. In the face of a perhaps beautifully complicated life, I’ve opted for oversimplification…If we’re willing to apply religion to the whole of our own lives as readily as we level it at others, it can wonderfully disrupt whatever it was we thought we were talking about, whatever we thought we had in mind and hand. Like culture, it cuts to the core of what we’re really doing and believing, of what values – we all have them – lurk behind our words and actions. Yes, we can use it to disavow and detract. (“I used to be religious.” “I’m spiritual but not religious.” “Let’s keep religion out of it.”) But I believe there’s something dishonest and deluded at work when we speak as if it’s only other people who are guided by unreasoning rage or strange notions about the way the world works, only others who, as the saying goes, have an agenda. In this view, religion is only a word for the way intellectually underdeveloped people get carried away, a snob’s word, and it strikes me as a strange disowning of one’s own vulnerability, and if you like, gullibility: it’s a rude denial of the fact of our common creatureliness.

And so perhaps the reality that so many different kinds of people love Stranger Things can be a window into the truth that we actually have a lot more in common with our hopes and dreams than we thought.

We want the world to be a certain way, we think of good and evil in a certain way, we have an ache that is hard to describe and even harder to defend. And yet we believe it anyway, or at least we want to.  It is in a word our religion.

I have many religions about several strange ideas.

But one of them is Stranger Things. 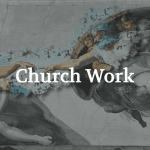 October 27, 2016 The Gospel According to Stranger Things: A World Of Dungeons And Dragons
Recent Comments
0 | Leave a Comment
Browse Our Archives
Related posts from Jonathan Storment