Shame On You: Witch Hunts 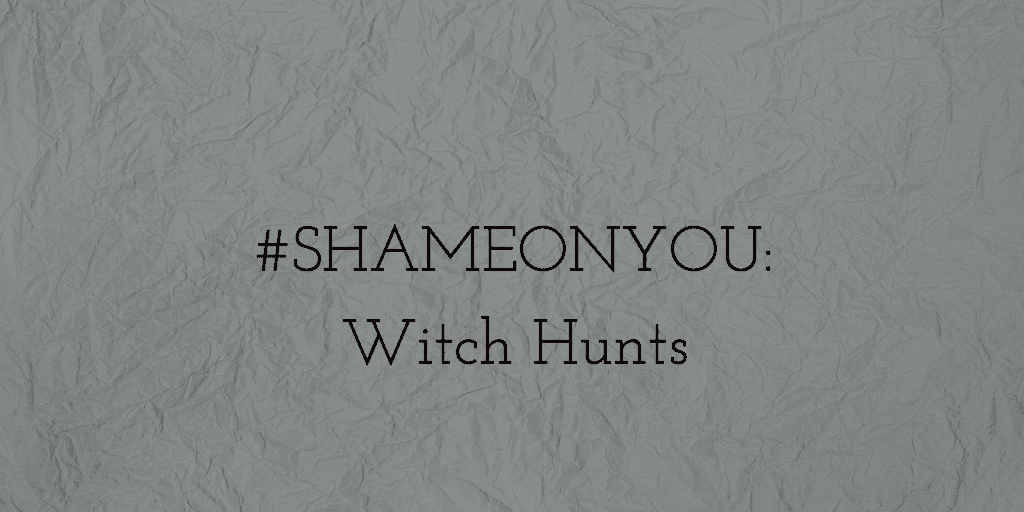 I’d like to start a blog series today that will run through the season of Lent talking about Witches, Politics, the Stanford Prison Experiment and Evil.

And it all revolves around Shame.

Specifically what we do when we feel shamed, and why we feel this such persistent need to shame each other, and try to put people or keep people in their rightful place?

And why do people who have been shamed themselves, often very compassionate people, so often become the people who use shame so fluently on others?

I can tell you why, and chances are, you already know the answer to this, it’s because shame works so well.

Just this past week, I was in Los Angeles speaking at an event, and I drove by a group of 20 or so people holding a giant banner that said “Shame on [this person’s name] the President of the Cartoon Network for paying such low wages”

My friend told me that these weren’t actually employees of the Cartoon Network, but people who were paid to stand in a strategic location for days at a time holding this sign. They stand in a place where the President of CN’s friends and family will be driving by just to shame her.

Now this is not Puritan New England, this is the cutting edge progressive City of Angels, and this is what they do when you aren’t acting angelic.

Maybe you’ve heard of Judge Ted Poe, he’s a Congressman now, but for years he was a Texas judge that regularly made national news because of how he chose to punish criminals.

He’s a graduate of ACU, (where I graduated) he is from the same tribe of Christians I belong to, and I share lots of mutual acquaintances with him. When he took his new job as a judge he saw overcrowded prisons and jails and a justice system that wasn’t modifying behavior the way he thought it should.

So instead of throwing people into prison automatically, he’d listen to their victims and talk to the convicts and then decide what to do.

And often, Judge Poe would reach for shame.

So when someone is caught stealing from a grocery store, instead of putting him or her in jail, Judge Poe would sentence them to carry a sign publically that says “I stole from this store.”

And it wasn’t just small misdemeanors, there were several people who had DUI’s and some who had even killed people driving while drunk.

In lieu of going to jail, Judge Poe would make them, once a week, go the place of the accident or a liquor store and carry a sign saying “I killed someone while driving drunk.”

They’d serve probation and have their driver’s license revoked, but other than that they had a regular life.

And yet, despite their freedom, most of the people who were given this kind of punishment said that they would have much rather have gone to prison.

And you intuitively know why right?

Because this kind of way of measuring out punishment to fit the crime is so effective, it’s even more appropriate and satisfying to the victims, but it does some kind of damage to the soul that we’re rarely aware of.

When most of us think of public shaming we rarely think of today, instead we think of old Puritan stocks and people who wore the scarlet letters and witch hunts.

Last year, I read an article in the New York Times called “Witchcraft on the Campaign Trail” that centered around the sheer magnitude of times that Hillary Clinton was referred to as a Witch by her opponents.

And this Times article pointed out that witch hunts, like all forms of public attempts at shaming and punishment were based in fear of the unknown. Witches are what we call people we don’t like whenever we feel powerless. Here’s the way the article put it:

[Calling people witches] offer the blessed relief of assigning blame; they allow us to distill spite, that heady brew of vindication and humiliation. We may consider ourselves more enlightened than the Peruvian villagers who last month burned a woman alive, or than the rural Ghanaians who banish spell-casting women to primitive witch colonies…We have many more tools than did the 17th-century villager to make sense of our world, chemistry, physics, biology and guilty consciences among them. But misfortune continues to perplex and provoke us. Our stomachs still lurch. Any number of things disturb us in the night.

Any number of things disturb us in the night.

In reading up on this, I read about a letter written from 1742 by Abigail Gilpin. Abigail was caught having an affair with one John Russell while her husband was away from work.

And the judge had sentenced both of them to a public whipping, each were going to be whipped 20 times. So she had appealed privately to the judge in a letter, not asking to not be whipped, but to be whipped early in the morning before the town woke up.

“If your honor pleases,” she wrote, “take some pity on me for my dear children who cannot help their unfortunate mother’s failings.”

It was commonly pointed out in this day, that this kind of punishment was worse than capital punishment, because of what it does to the people’s community and souls.

But it doesn’t just do damage to them does it?

All of our self-righteous indignation and anger that leads us to point out the flaws in everyone else, also eats away at our own souls.

So much so that preachers would stand up and preach things like this about going to places where there were floggings and executions:

Go not to that place of horror with elevated spirits and gay hearts, for death is there! Justice and judgment are there!” – Rev. Nathan Strong, of Hartford, Conn.,

When I read that I immediately knew why he would need to preach that, and why we need a word like that today.

Most of us think that we’ve progressed to a better world but I’m starting to have my questions.

We’ve progressed technologically and scientifically, but we haven’t progressed morally.

And now we use our great achievements to do the same things we’ve always done, take great pleasure at publically destroying anyone who steps out of line of what the latest fashionable ethic is.

We no longer have stocks, we have Twitter, We don’t do public floggings, we do hashtags and passive aggressive commenting/liking/sharing.”

We make fun of the Puritans for witch hunts, but let’s at least be honest with ourselves.

We only make fun of them because we no longer believe in the witches.

We still believe in the hunts.

March 7, 2017
The Gospel According to Stranger Things: The Call to Worship
Next Post 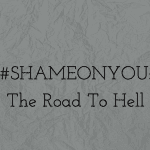 March 21, 2017 Shame on You: The Road to Hell
Recent Comments
0 | Leave a Comment
Browse Our Archives
Follow Us!