A yoga teacher reflects on life’s twists, turns and stretches

By Karuna, with Julie Curtis

Some people know early on what direction their life is meant to take. Lucky them, right? The violin virtuoso and the born political activist and the guy who’s been making his own indie films since he was seven.

But for the rest of us, undecided/undeclared is a state of being that can stick with us long after we’re past college age. So many paths extend from every point, it can be hard to recognize the one that’s headed our way. We look for guiding lights in our lives, and sometimes follow them so closely, they blind us to possibilities for true self discovery.

My own personal journey actually began, I can see now, as an extension of someone else’s personal journey—my mother’s. Even though she had married a football coach and was raising two wildly athletic Rocky Mountain boys who would also grow up to become football coaches, my mother didn’t want me to run track, let alone put a football helmet over my long, wavy strawberry blond hair. Her reason? She didn’t want me to run out of breath.

Maybe she wanted to make sure that like her, I could hold an operatic note for a minute and a half straight. Maybe she thought that was an important skill for a girl to develop. So at age 9, when I wanted to run screaming onto a sports field, my mother hauled me directly to the nearest ballet studio where, she thought, I would build and hone my ability to respirate properly. It wasn’t so bad. I loved the leotards, and the graceful, precise femininity of classical dance (and did I mention the leotards?)

I readily adapted myself to my mother’s rose-colored vision of what a girl ought to do to keep herself healthy, fit and beautiful. I played the proper princess for my mother, and I got to dress in fabulous outfits and work up a sweat at the same time. Win, win.

When summers came around, Mom would pack my siblings and me onto a train to Illinois to visit my Slovakian grandparents. And every year, at the urging of my grandmother, my sister and I would put together some kind of duet to perform in the local summer talent show.  In the summer of 1969, our sister act was the Fifth Dimension’s big hit song  “The Age of Aquarius,” from the musical, Hair. (When the moon…is in the seventh house…and Jupiter aligns with Mars…it just started playing in your head, didn’t it? Yeah. Sorry about that.)

We sang with what must have been adorably naïve conviction, certain that the lyrics of our song were grounded in some vitally important cosmic truth. The Age of Aquarius was dawning! Surely all our lives would pivot now, and point directly toward harmony and understanding. What were the rest of those lyrics? “Peace will guide the planets, and love will steer the stars!”

Of course we had no idea that while we were belting it out onstage in the midwest, a man was on his way from India to Los Angeles, California, with the express intention of revealing the secret mechanics that were pushing the Age of Aquarius into being. Through the lens of his cultural background and spiritual training, Yogi Bhajan saw with absolute certainty that universal shifts were occurring –shifts that would cause old systems to break down, opening the way for an unprecedented expansion of human consciousness and spiritual awareness. …to be continued… 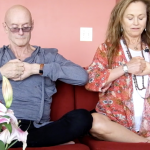 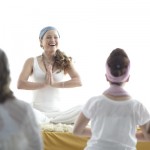 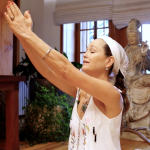 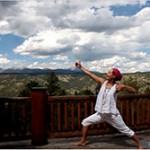 New Visions
How to do Archer Pose
Karuna 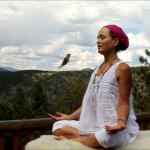