Making Peace With the Culture and Those Who Create It

This is Eadwine the Scribe. Drawn by an anonymous artist around 1147 as an illumination on parchment, he can currently be 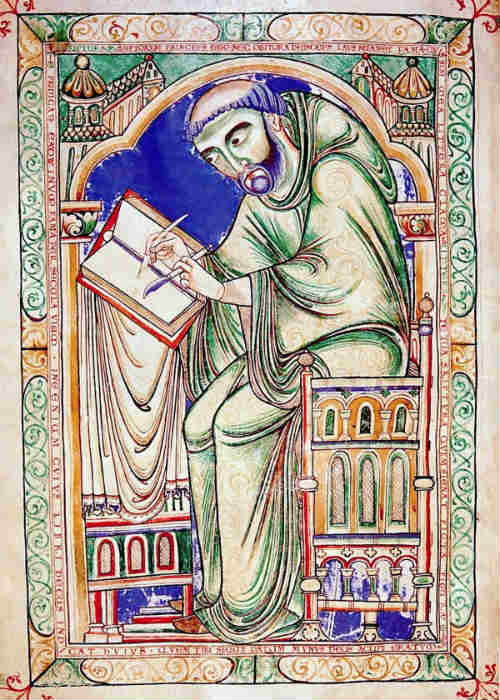 found in the collections of Trinity College, Cambridge, in England. Ironically, the founder of Trinity College was Henry VIII, who also ordered the dissolution and looting of the very sort of English monasteries that would have been home to a scribe like Eadwine.

It was also scribes like Eadwine, laboring especially in Irish monasteries, that preserved the great works of the ancient world, from Aristotle to Plato, and re-introduced them to Europe after the fall of Rome and barbarian invasions.

The Catholic Church was pivotal in the founding of the university system, and for centuries, commissioned and funded much of the Western world’s most impressive art, music and architecture (not to mention science, including astronomy, in which she still is an active participant).

But these days, the Church, especially in Western Europe and North America, has trouble enough maintaining the Catholicity of even her own universities, and her influence on culture is vastly diminished. There are lots of reasons for that, but one is simply demographic — orthodox Catholics are seriously underrepresented in positions of power in higher education and the media.

You could argue that the waves of political and social liberals — some of them with a dim view of organized religion in general and ours in particular — that have overtaken these areas in the last 40 years are actively discouraging the advancement of those who don’t agree with them, whether it’s political and/or social conservatives, or traditional Christians. There’s  some truth to that. But it’s also true that, increasingly, we’ve yielded the field.

If that situation persists, we’ll continue to see our worldview and philosophy relegated to the margins. At the same time, our history and practices are distorted and often maligned, as we depend on people who are either ignorant of Catholicism, or outright hostile to it, to tell stories about us to students and the mass audience.

Frankly, you can’t expect to be represented unless you represent.

Standing on the sidelines and throwing rocks at the culture is not enough. Higher education is outside my realm, but I’ve spent most of my life thinking and writing about the media — especially TV and the Internet — including covering TV as a print and online journalist in the mainstream media for the last couple of decades.

People who’ve made a career in entertainment work very hard and sacrifice a lot for their success, whether in front of or behind the camera. And once they get into a position of influence, they do projects that promote their worldview — and, of course, they would. If it were you or I, we’d do the same thing.

What’s on TV is reflective to a large extent of what the audience wants, but at the same time, it reflects what its creators think is compelling, right and true. Very few people are going to be the engine behind a project that conflicts with their own deeply held beliefs, and more often than not these days, those beliefs are not aligned with many of ours.

To me, it’s simple. You have to be in it to win it, and the first step is appreciating and understanding the culture as it is. With that knowledge in hand, you can then figure out how to change it … from the inside.

Be a writer, a director, an actor, a singer, a dancer or an artist. Or — and these are equally important, if not more so, in some cases — be a gatekeeper, one of the people who shepherds projects and sees that they get made, such as an agent, a producer, a development executive, or a studio or network executive. More humbly, one can start as a script reader (the first gatekeeper, and often the person who decides a project is DOA).

One can also be the money. There exists a Fox News, for example, because Rupert Murdoch made a heap of dollars and pounds with his media properties in his native Australia and the U.K., bought 20th Century Fox (along with publisher Harper Collins and the Wall Street Journal, among other properties) and decided to launch his own competing cable-news network back in the ’90s.

You may not like Murdoch — and plenty don’t, for a whole host of reasons — and you may not like Fox News, but his, and its, impact on media is undeniable. Murdoch is known to be a Christian (and has been a benefactor to the Church in the past) but imagine someone with that wealth and influence who was also an orthodox Catholic.

But I’m not here to teach you how to become a mogul. If I knew that, I’d be one. My goal, as stated in the title of this post, is to help my fellow Catholics make peace with the culture and those who create it.

I’m here to talk about pop culture, specifically TV and digital (and maybe a little sports, especially football, since the NFL is the greatest reality show on TV), to introduce you to some of the people who make it, Catholics and otherwise, and talk about projects of interest to folks like us.

Also, from time to time, I’ll discuss about how the sausage gets made and ways you can learn to be a sausage-maker yourself.

It’s our culture as much as anyone else’s, and we deserve our rightful place in it, but nobody gives anything to anybody in Hollywood. If you want it, you have to go get it. 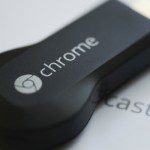 February 6, 2015 Chromecast Has $6 for You in Time for Valentine's Day
Recent Comments
0 | Leave a Comment
Browse Our Archives
Related posts from Kate O'Hare's Pax Culturati