The ‘Spotlight’ That Should Have Killed the Church — But Didn’t 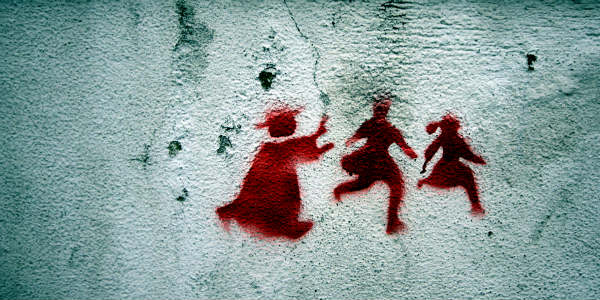 The other night, I went to a screening of the new movie “Spotlight,” which details the investigation by the Boston Globe’s Spotlight team into the priest sex-abuse scandal and cover-up in Boston, first published in January 2002.

Aside from a couple of pointed efforts to deflect the conversation away from whatever role homosexuality played in this – not surprising, considering our current political climate – the film, which opens in selected theaters on Friday, Nov. 6, was clear-eyed, not sensationalistic, and balanced. It not only hammered the Church (and rightfully so) for its role in the scandals but also the Globe and other city institutions that downplayed the reality of the situation or turned a blind eye.

If you’re of a weak constitution, or just want to think somebody was out to get an otherwise innocent Church, this isn’t the movie for you. Our priests and bishops not only did wrong, some of them did evil. Too many have escaped the legal penalties for what they did, but be assured, their real Boss missed nothing that was done, and there will be a reckoning for each and every one, whether they wore clerical blacks or a red cap.

As a Catholic revert who only came back to the full-time practice of the Faith after the scandals, my understanding that this is a general sin of mankind, not a particular sin of Catholics, was a great help.

No one who’s dug into similar and ongoing child-sex-abuse scandals (and I have) involving public schools, private schools, sports teams, dance studios, scouting, other religious communities, famous individuals (such as former Subway spokesman Jared Fogle, a husband and father) and, let’s not forget, Penn State, could think that celibacy was the cause or that there is something special about the Church or the Faith that created the phenomenon of child predators.

Now, we’re even seeing regular reports of female teachers preying on students, so it’s not and never has been purely a male phenomenon.

All that being said, priests, not only in Boston but around the world, committed heinous acts upon the innocent, and too many in the Church hierarchy were either naïve or complicit in shuffling them around and covering it up.

I can’t imagine someone could watch “Spotlight” and get even the smallest hint – the movie doesn’t show anything sexual, and graphic descriptions are brief but effective – at what was done and how it was handled, and not come away feeling anything but nauseated.

As a journalist, it also reminded me that teams like Spotlight – which could pick its own stories and spend as long as a year researching them before publication – are an endangered species. Lacking money and institutional support, long-form investigative journalism is becoming increasingly rare in our Buzzfeed world of SEO headlines and reliance on clicks and analytics to determine if a story is worth telling.

And yet, the Catholic Church is still here. After Pope Francis’ recent U.S. visit, it’s evident that the Church – or at least the pontiff – is more popular in some quarters than it’s been in decades, and that it still carries moral weight in the world.

As bad as things are (and the numbers aren’t promising, especially among the young), it could – indeed, it should — be so much worse. And we’re not helping.

Especially in the wake of the recent Synod on the Family in Rome, there are lots of Catholics running about in a panic, skirts up over their heads, certain the Church is about to change ancient doctrine, schism, collapse altogether or all of the above.

Honestly, are you not paying attention?

How is it that we still exist as a coherent entity at all, in the wake of what we did? Forget that the overwhelming bulk of the abuse cases are decades in the past, that we’ve taken huge steps to clean up our act, that other places and people do it, too – we’re Christ’s Pilgrim Church on Earth, and our priests put their hands on children.

Battered, bruised and broken, we are still here. Despite our worst sins, people continue to be drawn to us. We have moral standing beyond the faithful, with even people that disagree with us looking to the Church and the pope for guidance. And we still have vocations and converts.

Keep in mind, the problem can’t be all laid at the feet of Vatican II. The scandals broke in the 2000s, but most of the abuse cases dated back to the ‘80s, ‘70s and before. So, we’re dealing with priests who were probably formed and ordained 10, 20 or more years earlier than that, long before the biggest changes of Vatican II hit at the parish level. A lot of them died of old age before paying for their crimes.

These priests started their Catholic lives with the Baltimore Catechism and the Tridentine Mass; among them are those that probably celebrated the Tridentine Mass. The rot at the heart of priestly formation is nothing new. It’s been with us for at least a half-century, if not longer.

The Church, as she was in those halcyon days before guitar Masses, formed these men from their childhoods, and still they were warped beyond recognition.

The Church’s survival isn’t due to our personal holiness. God knows, plenty of folks, from parishes to the Vatican, did their level best to drive this bus right off a cliff.

By all rights, considering the appalling, sustained and stomach-turning nature of the sex-abuse crisis as it unfolded around the world, we should be a metaphoric heap of smoldering rubble right now. At the very least, our seminaries and pews should be nearly empty.

Just to realize that strong, virtuous, faithful young men and women (and by all accounts, today’s young priests, seminarians, lay brothers and religious sisters are going to do us proud) continue to be willing to give their lives to the Church and wear clerical garb and habits in public almost beggars the imagination.

Of course, millions of faithful Catholics gave blood, sweat and treasure to preserve the Church, but it’s more than that. All the efforts of dedicated journalists like the Spotlight team haven’t been able to save the Fourth Estate, which is being gutted from the inside and crushed by the financial pressures of a technologically disrupted world.

The only real answer is this: We are the Church founded by Christ, who set the Holy Spirit over her to guide and sustain her. He has promised to stand with us until the end of time. Despite our best efforts to wreck the Barque of Peter, He remains at the tiller, and the Holy Spirit endures as our compass and North Star.

This should not make us proud. It’s not our doing. We are merely the beneficiaries of divine grace. We don’t deserve it, but it’s given nonetheless.

We should have destroyed ourselves long ago, and yet we are still here.

When you see the light of Christ in the faces of children at First Communion or Confirmation, fall to your knees in wonder and humility.

We live not by our own efforts, but by His grace. May we be worthy of it.

Image: “CatholicChurchAbuseScandalGraffitiPortugal2011” by Milliped – Own work. Licensed under CC BY 3.0 via Commons. 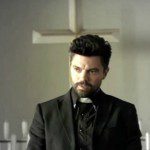 November 5, 2015
'Preacher': AMC Goes on a Violent Search for God
Next Post 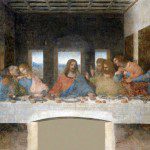 November 7, 2015 Overheard at Whole Foods -- 'Body of Christ' Options
Recent Comments
0 | Leave a Comment
"Now I highly doubt if Irene is even his daughter or like someone else's daughter ..."
Grimm_Persona ‘The Chosen’ Season 3: The Taxman ..."
"gosh they are all too obsessed like too obsessedx.2635C.US/By5119e"
Sunses ‘A Gipsy Christmas’: House of the ..."
"Sure. I have read a couple of books on the early days of the NFL. ..."
Jim Dailey The Catholic Roots of the NFL: ..."
"This is about the roots of the NFL, which date back to the '20s. So, ..."
Kate O'Hare The Catholic Roots of the NFL: ..."
Browse Our Archives
Related posts from Kate O'Hare's Pax Culturati