Story Editor Sara Anne Fox to Writers: ‘Here Are the Rules. There Are No Rules.’

After a career spent covering TV as a journalist and being immersed in that kind of storytelling, when I decided to try my hand at writing a Christmas movie, I needed some help.

So, I turned to a woman I’d met at an event, and I’m glad I did (the script, my first, got optioned and has a director attached).

Her name is Sara Anne Fox (website here), and she goes by Saran.

A writer herself, she’s worked as a development executive. Now, in her work as a story editor and script consultant, she helps writers — screenwriters, novelists, nonfiction authors — be better.

And if there isn’t much talent to be seen … well, we’ll get to that in a minute.

Recently, I got Fox to leave her beloved Silver Lake neighborhood, and we sat down to talk writing at a brewpub on the Westside of L.A. Here are some highlights of that conversation.

On the hardest thing about working with writers:

When a prospective client, or a client, has a screenplay they’ve already written, and they don’t have any talent.

But many times that’s the hardest, because then what I have to say to them is, “There may be a screenwriter in you, but we have to back off, and we have to start an education. I’m going to be in screenwriting 101 with you. We’re going to be watching movies, reading scripts, doing scenes that I assign you, to see if you can really do this, because your script isn’t good.”

… But when someone really can’t do it, I say, “You might want to hire me to rewrite your script.” So the hardest thing is basically having to tell someone the truth, but I do. I have to do it. I have to be honest.

And I could steer them in the right direction, if they don’t want to work with me. I’d say, “Take some screenwriting courses. Do you go to the movies? Do you read scripts?”

I’m here to help, but I’m not here to give someone a load of baloney just to take on a client. Fortunately, I’d had very few of those.

On the truth of the old saying, “writing is rewriting”:

They talk about the “vomit draft.” I don’t like that phrase. Hemingway said, the first draft of anything is crap — and he didn’t say crap. And I don’t like putting [the first draft] down, because it’s a blueprint. You finish something, and then it’s writing and rewriting.

Writing is rewriting. So I tell them, “You are going to rewrite this.”

So I have one client, we had a script, and it’s won awards. He’s on his way up, this guy. And we worked on this for a long time. He must have revised scenes and big pieces of the script at least 20 times. At least 20 times, he went back and refined it.

Because each time I read it, and each time I was watching something on television or getting ready to go to bed, an idea would come to me. I would write it down, because you are always being creative.

On the magic and mystery of writing:

For me, as a writer, my characters are smarter than me. When I sit down and write to work on a screenplay, my characters know a lot more than I do, because they’re buried somewhere in me.

But I’m more mature than they are, because they want to stay at a scene forever. “Oh come on, let’s work this out. How about some on-the-nose dialogue?” So, the whole process is really interesting.

On what “on-the-nose dialogue” means:

[On-the-nose dialogue is] not interesting. It’s saying everything, being obvious. A man is cheating on his wife. She suspects. He comes home at three in the morning, lipstick on his collar, and she’s there with the rolling pin, right?

No. What he does is, he looks around, and he says. “This place is a dump.” Now what did that do? It’s a diversionary tactic.

We know he’s been cheating, and we know she suspects, but rather than defend himself with saying, “Oh no, honey, I love you. I was just out with the boys,” … you understand what’s going on here. A marriage is in trouble, and he won’t cop to it.

On the process of working with a writer:

You have to understand the animal, who is my client. Can I tease them? Do they have a sense of humor? How do I get the best from them? How do I establish a relationship?

But for me, it’s all about intuition too.

This wonderful client, we’re working on a third project. He’s in his first five pages, and he sent it to me. Something was off, and I felt it. I intuited it. You sense it, and then you examine, and then you say, “I see what’s missing, move this around. and it makes more sense.”

The thing is, so you’re working with intuition, intellect, heart, your brain and your experience.

This is why I tell screenwriting students or aficionados or newcomers, “Google the AFI’s greatest American films, a hundred of them. Watch them. Read scripts. Sit with your back to the screen when you watch a movie, listen for sound effects music and dialogue, the rhythm of dialogue, subtext, what’s said, what isn’t said, the value of pauses and silence.”

Writing really is going in a room by yourself with your muse, with your pastor, your subconscious, with everyone you’ve ever loved or hated, who’s going to come out on the page. It’s really being alone with yourself and your story.

On the process and there being “no rules” (other than proper formatting, spelling and grammar, of course):

There’s all this [screenwriting] software about emotions. And I personally say, stay away from all of that. Take one course, take two courses, then go write. Then go write.

You’ll take what you like from the courses, but the best thing to do is go to the movies and watch great TV. It’s the Platium Age of television, watch how things are constructed.

Whatever helps you find the voice of your characters, just do whatever works. Here are the rules, there are no rules, and if anybody tells you different, ignore them.

Along with story editing and script consulting, Fox is also available to speak to groups and classes. Click here for more info. 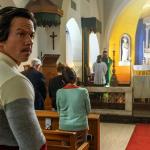 September 27, 2022 Study Explores the Intersection (or Not) of Faith and Media
Recent Comments
0 | Leave a Comment
Browse Our Archives
Related posts from Kate O'Hare's Pax Culturati