Twitter is a funny thing I still haven’t figured out how to use well. In one sense it could be considered an example of some of the worst of the modern age, encouraging the attention-deficit-disorder lifestyles of the era.

But it presents this opportunity to catch people in a moment. They’re in a cab or on an elevator and a 140-character tweet can grab them, draw them in for one reason or another.

Maybe that’s delusional. I think that, sometimes — that Twitter could really truly be more bad than good. But then I wonder; I wonder especially when I get some of the ugliest tweets in response.

So yesterday I could have just turned off my Ipad completely. But I decided to tweet some meditation lines from the church where I found listening to and thus meditating on the last words of Christ.

And so I shared a little. And boy did it seem to annoy people on Twitter (apologies to the people sitting behind me, too), bringing out words from them Christ did not quite say on the Cross.

The responses (the f word used was not faith) reminded me of a conversation I had months ago with Father Robert Barron, who created that wonderful Catholicism series. (More here and here on that.) 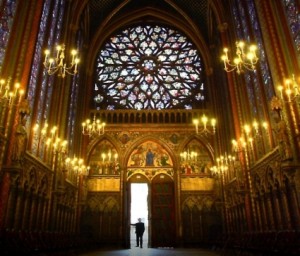 I asked him if online engagement is really worth it. It can be ugly. You do not always know who you are reaching (which of course can be an argument both against and for engagement — think of Rick Santorum’s C-SPAN Miracle story).

“There is a spiritual longing. I’m an Augustinian – your heart is restless until it rests in God,” Fr. Barron said in response. “It’s the most fundamental perception. I see that all. The. time. Everyone’s searching for a perfect goodness and a perfect justice. What’s animating us whatever we’re doing is a desire for truth.”

Echoing Cardinal Dolan in his WSJ interview the other day, Fr. Barron told me (and goodness knows I have seen it with my own eyes): “I see that everywhere. In young people. Especially on the Internet. (Some of them are obscene of course, I don’t respond to those.) They are mostly young men. Young men who will engage me on the Internet …  there are a great number, I think, who are reaching out. Who might come across a bit hostile at first. But they’re interested in the question of God. And I’m thinking about God and they know that. And they’ve taken the time to watch a video [on his Word on Fire site] and to respond.”

“Okay, I’ll engage you,” Fr. Barron said, explaining his pastoral approach to these communications. “Let’s talk. I’ll argue with you if I think you’re wrong … or I tell you where you can expand your thinking or so on.”

“I get that all the time, I see young people secularized, born in this secular culture. But who are looking,” he said. “And they are really looking seriously. I find that encouraging.”

I then asked him “What would you say to people who are engaging in the culture? Who get way too much of the kind of obscene/hostile kind of response. How do you keep doing it? Why is it worth it?”

“I get that — because I get that all the time too,” he shared. “Years ago I did a little video on corruption. And the word ‘corruption’ was in the title of the video. So a guy wrote in, anonymously, and he said, ‘Does anyone get the irony of this? I can’t imagine anyone more corrupt than a Catholic priest.’ I wake up in the morning, I see that. I get that. And it is wearying.” He recalled writing something “utterly benign” about praying for Christopher Hitchens that ignited a firestorm, thousands of responses. He found it even a “little bit” shocking. You do sometimes get, online, “punishingly negative responses from people. Even in that is a hunger for God,” Fr. Barron reminded me. 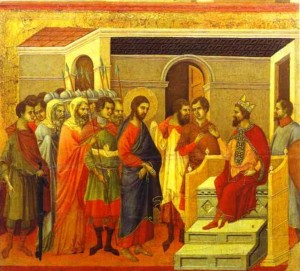 He talked about his “Herod Principle,” which I couldn’t help but have on my mind on Good Friday night. This is how he put in a piece about CNN’s Belief website, responding to the impressive angry, atheist presence in the comments there:

We shouldn’t imitate the Internet atheists in their nastiness, but we should certainly imitate them in our willingness to come forward boldly and showing some intellectual teeth. But the fierce and vocal presence of so many atheists on the CNN Belief Blog and so many other religious sites also speaks to what I call the Herod Principle.

The Gospels tell us that Herod Antipas arrested John the Baptist because the prophet had publicly challenged the King. Herod threw John into prison but then, we are told, the King loved secretly to listen to the prophet, who continued to preach from his cell.

St. Augustine formulated an adage that beautifully sums up the essentials of Christian anthropology: “O Lord, you have made us for yourself; therefore our hearts are restless until they rest in you.” A basic assumption of Biblical people is that everyone is hard-wired for God in the measure that everyone seeks a fulfillment that cannot be had through any of the goods of this world. Long before Augustine, the psalmist prayed, “only in God is my soul at rest.”

My wager, as a person of faith, is that everyone — at that includes Christopher Hitchens, Bill Maher, and Richard Dawkins — implicitly wants God and hence remains permanently fascinated by the things of God. Though the fierce atheists of today profess that they would like to eliminate religious speech and religious ideas, secretly they love to listen as people speak of God. This goes a long way, it seems to me, toward explaining their presence in great numbers on religious blogs.

So I say to Christians and other believers: be ready for a good fight, and get some spiritual weapons in your hands. And I say to the atheists: I’ll keep talking — because I know, despite all of your protestations and sputtering, that your hearts are listening.

“Love your enemies,” Fr. Barron reminded me during our interview, around the time Catholicism was about to launch. Christ, of course, delivered that message yesterday with His very life.

Living through Good Friday 2012, I can’t help but think we’re not even in full-on enemy territory yet — until the Obama administration starts martyring people for not wanting to pay for the supposed fundamental human right that is government-subsidized birth control, sterilization, and abortion-inducing drugs. It’s hard but it’s not yet that hard. Others before us have been asked to do a lot more than engage online! Or even protest a radically secularist administration intent — however well-intentioned some of the architects may be — on eroding the religious liberties of all Americans. With a little love and a lot of work, with our eyes fixed on Christ on the Cross,  who is all good and defeats all evil, it’s actually relatively simple — inasmuch as trusting in our Father is the key.

Into your hands Lord, I commend my spirit.

April 7, 2012 Divinely Awesome
Recent Comments
0 | Leave a Comment
Browse Our Archives
get the latest from
Catholic
Sign up for our newsletter
POPULAR AT PATHEOS Catholic
1 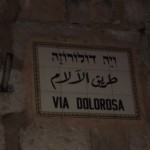 Catholic
He Never Tired of Repeating That Only Name...
Kathryn Lopez

Catholic
Does This Sound Like a 'Moderate' to You?
Kathryn Lopez
TRENDING AT PATHEOS Catholic