I Am What’s Wrong with the World

We have a collection of insights on what happened in Newtown, Connecticut last Friday up on National Review Online today. So many of the conversations we’re hearing are just not helping, at a time when silence and prayer might be the only wise response from most of us. I was especially struck by what Michael Pakaluk had to say:

When The Times invited essays on the topic, “What’s wrong with the world?” G. K. Chesterton in a letter offered his famous terse response, “I am.” We applaud his reply — and presumably the world has not changed. So if someone were to ask you, what was wrong about Newtown last week, will you reply similarly? A blog post entitled “I Am Adam Lanza’s Mother” has gone viral, but I do not see anyone yet claiming to be Adam Lanza.

I don’t know why Lanza went to the school. Assuredly he went there to kill, shooting each victim multiple times with a rifle from close range using frangible bullets. Perhaps he flipped out, or perhaps he was getting revenge or covering up another crime. But until I know that, not of his own fault, he became like a zombie and lost responsibility, I’ll hold that he did something evil. So I won’t yet say that the shootings were a “tragedy.” A suffering which befalls a great hero by fate is a tragedy. The German invasion of Poland was not a “tragedy.” A rape is not a “tragedy.” To shoot first graders systematically is not a tragedy.

Likewise I refuse so far to view Lanza as a conduit for the abstract force of “Violence.” President Obama came near to saying so in his otherwise admirable reflections at the vigil: “The causes of such violence are complex” and “no set of laws can . . . prevent every senseless act of violence in our society;” yet for all that we shouldn’t say that “the politics is too hard.” Keeping guns from conduits of Violence is an obvious first step.

I rather side with Plato in The Republic: “In all of us, even in good men, there is a lawless wild-beast nature,” and “there is no conceivable folly or crime which . . . when he has parted company with all shame and sense, a man may not be ready to commit.” Christians call it Original Sin, the inheritance of Cain. “We are all equal, all of us are children of Adam and Eve, weak creatures with virtues and defects, and capable all of us, if Our Lord abandons us, of committing the worst crimes imaginable,” says St. Josemaria Escriva.

I know that that is a moralistic conclusion. But I’m a Catholic, in the “minor penitential season of Advent,” which should elicit self-directed moralism. My practical advice is therefore: Let us examine our lives, repent in sackcloth and ashes, be as medieval as possible in “doing reparation” for others, and repeat, after Isaiah, “Woe is me! For I am lost; for I am a man of unclean lips, and I dwell in the midst of a people of unclean lips!”

​I am! Admitting that leads to conversion of heart and repentance, the marrow of the Gospel-invitation. I remember the insightful words of a holy priest well known to many of us from his long apostolate to priests and seminarians in Rome, Monsignor Charles Elmer, wondering aloud from time to time if, following the close of the Council, we had sadly become a Church that forgot how to kneel.If we want the New Evangelization to work, it starts on our knees.

Remember a few years back, when Cardinal Cahal Daly led us in our June retreat? Speaking somberly of the Church in his home country, he observed, “The Church in Ireland is in the dirt on her knees.” Then he paused, and concluded, “Maybe that’s where the Church is at her best.”

We kneel in the Sacrament of Penance because we are profoundly sorry for our faults and our sins, serious obstacles to the New Evangelization. But then we stand forgiven, resolute to return to the work entrusted to us – as evangelizers of the Gospel of Mercy.

Penance would not be a bad way to get a little Christmas peace before Advent is over. Divine Mercy is a lot more powerful than any piece of legislation.

December 20, 2012 Christmas Stress?
Recent Comments
0 | Leave a Comment
"If you're at all interested in knowing . . . the Catholic Dogmas . . ..."
Vicki DePalma 10 Catholic Things that Caught My ..."
"Citation for this prayer, please?"
Deb. Thurston OCDS Athirst? Moving Deeper into the Trinity
"You're still on Patheos Katheryn? From what I can tell Catholic Patheos has become a ..."
Manny 10 St. Anthony of Padua Things ..."
""2. Living in Accordance...."The Sheen meditation is absurdly wrong."
barthomew 10 Catholic Things that Caught My ..."
Browse Our Archives
Related posts from Kathryn Lopez

Catholic
Why Didn't Cardinal Dolan Walk Away from the...
Kathryn Lopez 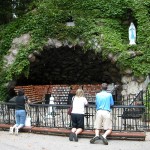 Catholic
YOU Are Welcome
Kathryn Lopez
TRENDING AT PATHEOS Catholic