The above is a good and honest question, if you’ve been watching the Obama administration. Look away, they said, during the campaign. What they’ve communicated might be best summed up and translated for transparency: We’re all about “women” and their “reproductive health” rights and “health care” and, oh, by the way, if we and our friends lead you to believe Mitt Romney and a bevy of Catholic bishops want to take away your contraception, single women, we are all too happy to have you believe that. And not just because it’s good for tricking single women back into voting for us. Because we happen to believe that some of what some, most prominently the pope in Rome and Catholic bishops, preach, is beyond what can be tolerated by polite society in 2013.

Or, as Archbishop Charles J. Chaput of Philadelphia has written: The Department of Health and Human Services abortion-drug, contraception, sterilization employer mandate that falls under “Preventative Services” regulations in the unfolding of the president’s health-care plan is “an ideological statement; the imposition of a preferential option for infertility. And if millions of Americans disagree with it on principle — too bad.”

(I put “women” in “scare quotes,” in the first paragraph, by the way, because the word use is an ideologically loaded one, as the archbishop notes.)

The Catholic Church teaches that the use of contraception is morally wrong. It ruptures a relationship between a man and a woman, whose sexual union in marriage is meant to be just that, a union, open to life, on a journey to eternal happiness, living lives of freedom — the freedom that flourishes in surrender to our Creator. You’re free to believe or not. You’re free to buy into it or not. It’s a proposal. Obviously, it’s a radical, countercultural one.

On his Catholic Channel radio show on Sirius XM last week, New York’s Catholic Cardinal Timothy Dolan, reminded listeners of what the president of the United States said to him about three years ago now: I don’t want anything this administration does to impede your good work.

President Obama also vowed to respect conscience rights during his infamous commencement address at Notre Dame in May 2008.

Reporting in about the mood of this month’s gathering of Catholic bishops in California last week, Cardinal Dolan said: “I don’t mind telling you, we’re nervous. But we’re hoping for the best and we’re hoping that wise voices will prevail.”

He did not hesitate to acknowledge that people think him naïve to have any hope left. But his posture continues to be: Let’s all be reasonable here. We’re a country that respects conscience rights. Let’s do so! Cardinal Dolan is urging the administration to remember that. “It’s the most sterling American tradition that we’d never do anything to force people to violate their conscience,” he said.

He expressed his frustration at the various iterations of administration “accommodation” of Catholic and other religious American’s concerns with the coercive mandate; the government has put itself in the position of determining just who is religious enough to claim protection from the mandate.

“We’re … uncomfortable with your telling us what we have to do to be faithful to our religion,” he said of the government’s posture. The original rule had “artificial, oppressive distinctions” between houses of worships and charities and schools, distinctions that remain, despite insistence that the problems have been solved. It’s artificial because “what we do flows from who we are… There is not a not a cleavage there. Monday flows from Sunday.”

It’s, of course, because of the cleavage in the public witness of all too many Catholics and other professed believers that the government can get away with this without overwhelming outrage. How many do not live as if Monday flows from Sunday? Never mind Friday or Saturday night. (That was an inescapable undercurrent at last week’s Catholic Media Conference in Denver.)

Friday began a second annual Fortnight for Freedom, an effort lead by the Catholic bishops dedicated to prayer and education about religious liberty and our moral and civic obligation to protect it. It was occasioned by this controversy of the Obama administration’s making, insisting on “unfortunate divisions” between houses of worships vs. charities and school, divisions that are foreign to the lives of the faithful –- or at least should be.

Again, Catholics all too often have become so secularized that we don’t always see the outrage. But as the government insists on these “artificial, oppressive distinctions,” coercively (through fines) forcing choices between conscience and compliance, it’s time to “wake up” already, as Archbishop Chaput recently put it: “The day when Americans could take the Founders’ understanding of religious freedom as a given is over. We need to wake up.”

The fact of the matter is: our country needs the truly faithful, loving God in prayerful service. Even Barack Obama knows it. That’s why he goes to Notre Dame and pays lip service to conscience, speaks at prayer breakfasts, and tells Cardinal Dolan that what Catholics do is important.

Now is our chance to show the world why we do what we do, believe what we believe: Because we are children of a God who loves us with an eternal mercy, a Divine mercy the world aches to bath in.

On his radio show, Cardinal Dolan offered a simple plea to the administration on the HHS mandate, that goes into effect for religiously affiliated organizations on August 1: Say: “If it’s Catholic, tell us you can’t comply, and we’ll respect that.” That goes, to, for Protestants like those who run Geneva College or Hobby Lobby who object to portions of the mandate (the abortion-drug coverage). The government’s been making arbitrary exemptions and claims to accommodations. How about simply respecting conscience? How about protecting religious freedom?

Respect conscience rights. This common ground so many of us used to share. It’s not just the kind of thing the likes of Rick Santorum is stuck on. Ted Kennedy and Hillary Clinton have been there, too. God Himself gives us the freedom to believe or not to believe in Him. And what gift to the world the United States has been in protecting it!

“It is time to draw a line,” Cardinal Dolan said on his radio show last week, relaying what he offered as a continuing consensus among Catholic bishops and other leaders. “We teach very well. We heal very well. We serve very well.” And, “if you tamper with convictions, the ministries are going to be deluded… If you try to comply, it is a slippery slope.”

We’ve got to be who we say we are. That’s the reality of real, integrated faith. If we believe we are made for eternity, why would we do anything less? It’s countercultural, but it’s true to our call. 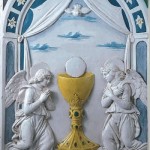 June 26, 2013 On Being Fruitful -- No Excuses!
Recent Comments
0 | Leave a Comment
Browse Our Archives
get the latest from
Catholic
Sign up for our newsletter
POPULAR AT PATHEOS Catholic
1

Catholic
Are We Salt and Light?
Kathryn Lopez
TRENDING AT PATHEOS Catholic