Too Amicable For Me: “Welcoming” Church Makes Jesus a Baby Girl

The babe in the manger is a girl named Hope.  Joseph (er, “Jose”) is an illegal immigrant looking for a job in the U.S.  Mary (“Maura”) is a teenage runaway who fled her Connecticut home after her parents became upset upon discovering her pregnancy.  The Angel Gabriel, nicknamed “Gabe,” is a homeless black man.

The reinterpreted Nativity, its characters hewn by chainsaw artist Michael Higgins, stands in Tiverton Four Corners, Rhode Island.  The unconventional display was conceived by Bill Sterritt, pastor of the Amicable Congregational Church.  Sterritt envisioned the Christmas story in modern times.  In his model, the Magi are a Buddhist, a Muslim and a Hindu.

The exhibit stands on Main Street in Tiverton Four Corners, in front of the Amicable Congregational Church which is affiliated with the liberal United Church of Christ.  According to the church’s mission statement, they

I think they made their point.  Personally, though, I prefer this Nativity set, which stands in St. Peter’s Square and inspires the faithful, not to political posturing, but to faith and to prayer. 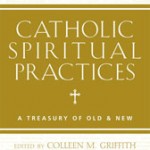 December 9, 2012
“Catholic Spiritual Practices” Is a Tool Kit for Prayer
Next Post

December 13, 2012 The Polemics of Disbelief: An Atheist, an Agnostic and a Catholic Priest
Recent Comments
0 | Leave a Comment
Browse Our Archives
get the latest from
Catholic
Sign up for our newsletter
POPULAR AT PATHEOS Catholic
1 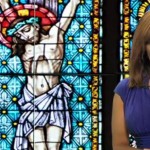