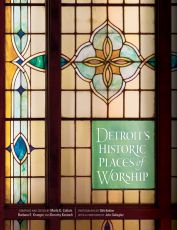 My fingers tugged at the wrapper, and I held my breath as I rushed to open Detroit’s Historic Places of Worship.  I’d visited many of Detroit’s oldest churches through the years, and I was looking forward to reviewing this new book; but I was delighted by the explosion of color and fine detail on every page of this beautiful coffee table book, released in September 2012 by Wayne State University Press.

“Churches and synagogues have played a crucial role in Detroit for generations,” said Nancy Finegood, executive director of the Michigan Historic Preservation Network.  “Many of these sacred places are of unique architectural and historic significance.”

Detroit’s Historic Places of Worship includes profiles of 37 houses of worship, representing eight denominations and nearly 150 years of history.  Arranged chronologically, the entries reflect Detroiters’ pride and creativity during the city’s most prolific era of church building, the 1850s through the 1930s.  Authors Marla O. Collum, Barbara E. Krueger and Dorothy Kostuch incorporate information from public resources, church archives, and oral histories provided by clergy, parishioners, and church staff.  A map pinpoints the locations of the featured churches around the city of Detroit.

Some of the churches are no longer used by their original faith communities.  The original Temple Beth-El with its saucer-shaped painted dome, is now the Bonstelle Theatre.  The Romanesque Revival First Presbyterian Church, modeled after Boston’s Trinity Church, is now the Ecumenical Theological Seminary.  The Woodward Avenue Presbyterian Church with its distinctive octagonal lantern was most recently the home of the Abyssinian Interdenominational Center, and is now closed.

I’ve included here just a few of the Catholic churches which dot the central city, and which stand as evidence of the vibrant faith of the immigrants and auto workers who lived here. 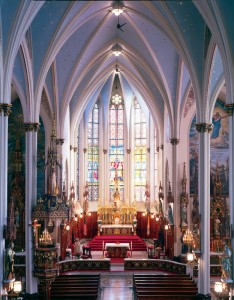 Designed by Francis Himpler and dedicated in 1873 to serve the German immigrant population just east of downtown Detroit, St. Joseph’s is an outstanding example of a Gothic Revival “hall church.”  The building is dominated by its central, massive tower and spire.  The vaulted ceiling is painted blue with stenciled stars.  It’s the only  church in Detroit to be listed on the National Register of Historic Places—in part because of its massive stained glass windows, which were created by Mayer of Munich and imported to North America.

The church is still open, but is now clustered with two other noteworthy Detroit churches:  Sweetest Heart of Mary, and St. Josaphat.

Here is a photo from the book, showing the elaborately carved altar and pulpit, and the statuary including the twelve apostles, who stand at each of the church’s pillars. 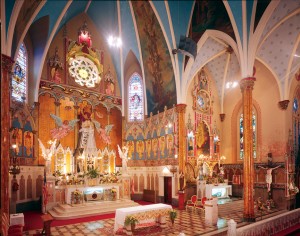 Detroit’s oldest Polish Roman Catholic parish, St. Albertus—designed by Henry Engelbert and dedicated in 1885—was created in the west Prussian style of Gothic.  The dominant octagonal central tower originally terminated in a tall spire, just like church towers in Prussian Poland; but the slate-covered spire was replaced by a copper-clad conical cap following a 1913 storm.

St. Albertus is noted for its vibrant color: vivid reds, blues and golds are used throughout the church.  The main altar is white marble, set against a gold mosaic ground.  Two marble side altars, in European style, contain life-sized clothed effigies of Saint Hedwig, a fourteenth-century queen of Poland, and Saint Stanislaus  Kostka, a sixteenth-century Polish Jesuit. 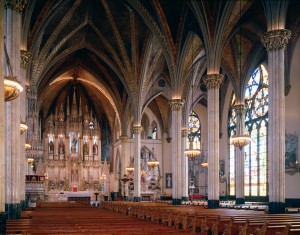 Designed by Spier and Rohns and dedicated in 1893, Sweetest Heart of Mary is one of the largest Catholic churches in metropolitan Detroit—originally seating up to 2,400 worshippers.  The tripartite main altar is extremely elaborate, carved of wood and painted white.  The vaulted ceiling features a number of groined sections.  Canvas has been glued to the ceiling, painted with gold stars, angels, and the portraits of many saints.  Five niches high on the walls hold statues of various saints, including a nine-foot statue of the Virgin Mary. 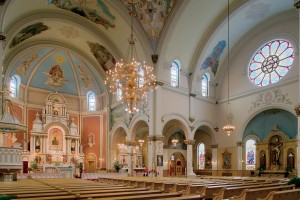 Murals of the Franco-Prussian War are an unusual adornment in St. Josaphat Church, which was dedicated in 1901.  Architects Joseph G. Kastler and William E. N. Hunter employed eastern European influences such as a steeply pitched roof, common in areas with heavy snowfall, and a grouping of three steeples.  Rose windows on the east and west walls depict St. Joseph and the Virgin Mary.  The lighting system, which has been unaltered since it replaced the original gas lamps in the early 1900s, features hundreds of bare light bulbs lining the ribbing of the vaulting in the apse, and a large chandelier over the sanctuary holds bare, globe-shaped light bulbs. 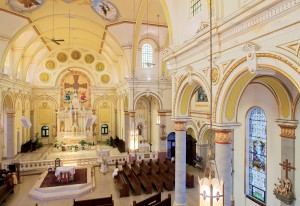 St. Charles Borromeo was designed by architect Peter Dederichs for Detroit’s east-side Flemish population; and when the church was dedicated in 1920, most of its members were of Belgian descent.  The church is predominantly Beaux-Arts in style but includes elements which are Romanesque, Renaissance, Classical, Arts and Crafts, and Prairie in style.  The baroque interior is cruciform with a barrel-vaulted ceiling, extensively ornamented with decorative plasterwork and painted murals.  Painted figures on the domed ceiling represent St. Martin de Porres, Saint Kateri Tekakwitha, Saint Andrew Kim, and Father Solanus Casey.

Detroit’s Historic Places of Worship features the dramatic photography of Dirk Bakker, including many views of each of the churches.  The book is available through Wayne State University Press.

Photos used with permission of the author.

September 17, 2014
Dear Pope Francis: Please Take Care of Yourself--If Not for You, Then for Us
Next Post