INNER CIRCLE: The Keys of Wisdom

SAYING 39: Jesus said: “The Pharisees and the scribes have taken the keys of knowledge (and) have hidden them. They did not go in, and those who wished to go in they did not allow. But you, be wise as serpents and innocent as doves.”

Again, we find another saying in Thomas that appears in similar forms from other Gospels. Here, the saying finds parallels in parts of Matthew 10:16 and also Luke 11:52, but in Thomas the application is slightly different.

Whereas in Matthew 10:16 Jesus sends out his disciples “as sheep among wolves” and therefore urges them to “be as shrewd as snakes and as innocent as doves,” here, Jesus frames this admonition after pointing  out that the teachers of the Jewish Law have hidden the keys of knowledge and refused to enter the door themselves.

This same observation is found in Luke 11:52, but in that case Jesus is accusing the “experts in the Law” of these things directly and there is no warning to his disciples to “be wise as serpents or harmless as doves.”

By merging these two statements together and placing the observation and admonition within a private conversation, rather than as part of a public rebuke of the Pharisees or an apostolic charge to his disciples, the meaning shifts just slightly.

The lesson seems to be that there are two ways to behave. By contrasting the religious fear response of those who hide the keys of knowledge and forbid others to enter with the suggestion that his disciples should strive to be both wise and innocent, Jesus isn’t advocating for those keys to be misused, or for the doors of knowledge to be thrown open wide.

Instead, Jesus urges his disciples to handle those keys carefully and to exercise both serpent-like wisdom and dove-like innocence when it comes to unlocking the doors of Truth.

What does this mean? What would this look like?

On the one hand, Jesus criticizes the fear reaction of the teachers of the Law when it comes to handling the keys to Truth, but at the same time he also understands that a lack of respect for those keys is just as dangerous. He doesn’t contrast hiding the keys with freely distributing the keys. He doesn’t suggest that the remedy for blocking the door is to throw the door wide open to everyone.

Yes, it’s wrong to hide those keys to wisdom, Jesus says. It’s foolish to refuse to open the door and experience the Truth for yourself, and it’s unwise to block that door so that no on else can enter in. But we must still take care about how we handle those keys, and who we open that door for, and most of all, we must be willing to enter into that door and walk through it ourselves.

So, how do we handle the keys of knowledge? With both wisdom and innocence.

How do we enter the door of wisdom ourselves? With that same balance of wisdom and innocence.

And where will we find that greater wisdom and sincere innocence necessary to determine who is ready to walk through that door, and who is not? By becoming fully transformed by the reality of Christ when we open the door and walk through it ourselves.

Misusing these keys we’ve been entrusted with can take many forms. One way is to hide those keys and refuse to allow anyone to enter into the Truth. The other way is to unlock the door and throw away the key without first understanding why we were entrusted with those keys in the first place, or why the door was locked to begin with.

Not everyone is ready to have their blindness removed. Not everyone is capable of seeing the Light. There is a natural process of growth and maturity that all living things must experience before they are ready to bear the fruit of the Spirit.

Our responsibility is to hold those keys with reverence and awe; to fully understand why there are keys, and why there is a door, and why it is locked from the inside.

Step one is to unlock the door and step inside. After that, the rest of it will come into sharper focus.

Ready to dive deeper into the Gospel of Thomas? Join us starting Feb. 13, 2023 for INSIDE/OUTSIDE, a self-paced online course that explores the background, history and meaning of this lost ancient text. 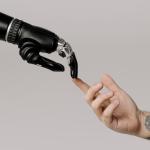 January 20, 2023
Is Artificial Intelligence A Threat To Christianity?
Next Post