A lesson from Jimmy Carter 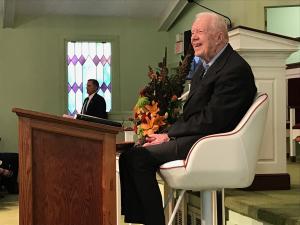 President Jimmy Carter started his Bible Study asking those present to raise their hands once they grasped the theme of the Scripture passage he was about to read.  He began, “beloved, let us love one another, because love is of God.”  He looked up as his lips stretched forming a gentle smile, his eyes sparkled just a bit as he looked out into the congregation.  A few hands rose.  He continued, “everyone who loves is begotten by God and knows God.  Whoever is without love does not know God, for God is love.”  At this point most hands were up in the air.  He nodded toward one of the faithful and her answer was loud and clear, “love.”  The President asked what we must do to receive God’s love.  He chuckled as almost everyone responded “love others.”  He corrected the congregation with a kind, soothing voice, “nothing, because God loves us first.”

After the Bible Study, Bishop Hartmayer and I remained for the Sunday morning service at Maranatha Baptist Church in Plains, Georgia led by Pastor Tony Lowden.  He preached on the love that God continuously shows us despite our frequent indifference.  He pointed to the life of the prophet Hosea who was asked by God to marry Gomer, an unfaithful prostitute.  Pastor Tony explained that the pain Hosea felt every time his wife was unfaithful did not even come close to the pain we cause God when we turn away from His love.

President Carter asked, “who here has someone he or she dislikes or hates?”  He raised his hand a bit to let us know this was not a rhetorical question.  Many hands went up.  He then continued, “and who would want to be reconciled to that person?”  Most hands remained raised.  Carter followed up with a very quick remark that got a chuckle from us, “well, do it.”  After a prolonged pause he suggested, “invite them to have coffee with you and be reconciled.”  The President shared how he reached out to the person who took his debate briefing papers in 1980 giving Ronald Regan a clear advantage at the presidential debate.  They were reconciled many years after the incident.  In his advanced age, frailty, and peaceful demeanor, President Carter shared that he believes there is no one with whom he needs to be reconciled.  At that very moment reconciliation seemed to me easy to achieve.

As I prepared with Bishop Hartmayer to celebrate Mass later that same day, I was deeply struck when the back door of the church opened and there was President Carter walking in with a tremendous joyful smile on his face.  “Good evening,” he said as I shook his hand and said, “good evening Mr. President.”  Even though there was a secret service agent standing behind him, I was struck by his unassuming and gentle presence.  I was reminded that it is possible to have disagreements and run ins with others, but above all is charity and reconciliation.  Division and bitterness never lead to the conversion of hearts, but love, kindness, and gentleness do.  God has loved us first, so what right do I have not to love others first? 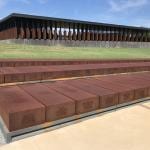 October 1, 2019
From Slavery to Justice in Montgomery
Next Post 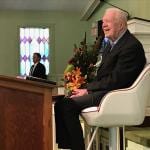 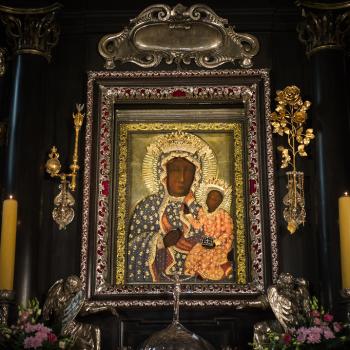 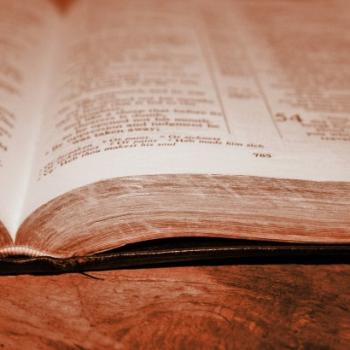