Power and Suffering: The Lectionary for the Twenty-First Sunday after Pentecost

Power and Suffering: The Lectionary for the Twenty-First Sunday after Pentecost October 11, 2015 Eric Smith

What It’s About: The Job text is the part of the book where things finally change. I often describe Job as an Oreo cookie: the beginning and the end are substantially different from the middle. In this case, though the “creamy filling” is chapters upon chapters of lamentation and woe. The beginning (the prologue, if you will) is about setting up Job’s suffering, in God and Satan’s backroom deal. And this isn’t quite the ending, but it’s getting close, and this is the part of the book where things start to happen. Throughout, Job has borne his suffering with indignation: he has insisted on his own righteousness. Of course, we the readers know that Job is, in fact, righteous; that was the whole setup! But along the way Job has pleaded for an advocate (a “redeemer”), and an audience with God. Here in chapter 38, he gets it.

The Isaiah text, meanwhile, is also about suffering. This is one of the famous “servant songs” of Isaiah that get used so much around Advent and Christmas. The author(s) of Isaiah didn’t mean for them to describe Jesus, of course; time only moves in one direction. More on that below. Isaiah(s) probably had Israel in mind, a nation personified in this woeful figure. In any event, this text has served for Christians as a description of Jesus’ life and ministry and death: rejected, afflicted, punished, and eschewed.

What It’s Really About: The Job text is among my favorite in the entirety of the bible. It (and a lot of the material that follows in chapters 38 and 39) really serves as a third creation story, after Genesis 1 and Genesis 2. It is a recitation of the omnipotence and omniscience of God; it is an argument for the overpowering and bewildering everywhereness of God. This is a God who knows, intimately, all the corners of the earth, down to the habits of its least significant inhabitants and the patterns of its being. This is all brought up in a kind of refutation of Job, but really, this is what Job wanted all along, isn’t it? He just wanted an explanation. Here, he gets one: God is in charge. It might not be satisfying (and in fact it makes the problem of theodicy much worse), but at least it’s not the same silence that marked that “creamy filling” of the Oreo.

What It’s Not About: The Isaiah text can be read by Christian to be about Jesus. But Christians should always bear in mind that such a reading is an appropriation, an adaptation of a pre-existing text to say something about a topic it doesn’t intend to say anything about. The author(s) of Isaiah lived in a place and a time, and their writings were pointed toward the concerns, traumas, and dangers of that place and time. The suffering belongs to them, and the hopefulness of verses 10-12 belongs to them as well. Christians understand that those verses’ hopefulness was fulfilled in Jesus, but that is a later reading. We should always remember that.

Maybe You Should Think About: These two texts present very different understandings of the source, role, and ends of suffering. Job sees it as divine fiat, answerable only by more divine fiat. Isaiah sees it as the burden of God’s servant people, to be redeemed in time with reward. Both positions are probably familiar, and there may be points of contact between them, but it’s also good to keep them separate. Suffering is one of those problems that people have attempted to understand in many different ways at many different places and times, and so it’s not surprising that we find two (and many more than that really) distinct views on it in the biblical text.

What It’s About: This is a continuation of last week’s meditation on Melchizedek, the mysterious priest of pre-Israelite Jerusalem who greeted Abraham upon his arrival, and who for the author of Hebrews stands in for a kind of universal priesthood. Melchizedek was a Christian before Christ, so the author wants to say, and so is a model for the kind of priest Jesus is—a mediator for those who seek reconciliation.

What It’s Really About: The two courses I teach most often at the Iliff School of Theology are an introduction to the New Testament and an introduction to the first 600 years or so of Christian history. It’s striking, to move back and forth between teaching those two courses. The history course is partly concerned with the development of orthodox theology, as expressed in creeds and councils and various writings by “church fathers.” The New Testament course, obviously, is about the New Testament, and includes close readings of books like Hebrews. What’s striking about the juxtaposition of those is the incredible degree to which the New Testament authors, including the author of Hebrews, were not aware of—not in on—the orthodox position.

In one sense, that shouldn’t surprise us. Time only moves in one direction, as I said above, and we can’t expect a biblical author in the first century to know about the theological formulations of the fourth century. But here in Hebrews we see the cost of lazy thinking about the development of the Christian tradition. The writer is grasping for ways to think about and describe Jesus, and he casts about for parallels and metaphors. Jesus is like Melchizedek. Jesus was a son. Jesus was obedient. Jesus was submissive. Jesus was designated. These are all fascinating ways to talk about Jesus, and they don’t all fit neatly with later orthodoxies. Of course they don’t. But somehow we expect them to.

What It’s Not About: This isn’t about orthodoxy, really. Orthodoxy is the concern of systematizers and institutionalists. It’s the work of bishops and emperors who are trying to build a Christendom. But Hebrews wasn’t doing that. Hebrews wasn’t concerned with imposing a viewpoint, like orthodoxy is; Hebrews was exhortation and it was explanation. It was more concerned with conveying meaning. That’s a huge distinction.

Maybe You Should Think About: Take the several overlapping identities proposed for Jesus in these verses. Try to represent them somehow: as a chart, as a diagram, as a list, or whatever. How much do they connect? How much do they flow out of one another? What is their relationship to one another and to other early ways of talking about Jesus?

What It’s About: Power. Prestige. Dignity. Position. This is about the human urge to make it, to attain things. James and John are inquiring about their status, and they are willing to do what they need to do to achieve what they want to achieve. This is a very human thing, to seek power and prestige. But the reaction of the ten is another very human thing: resentment at those who seek status. Here we can see some fracture in the ranks of the disciples; there seems to be jealousy over position. That’s natural, but it’s still pretty surprising to see (and to see reported so honestly) with Jesus and his inner circle.

What It’s Really About: Christian interpretation has usually made this about verses 43-45. This connects back to the Isaiah text above; Jesus has often been understood in the Christian tradition to have been primarily a servant figure. Those who wish to become great need to become humble. It’s a counterintuitive idea, but a powerful one.

What It’s Not About: Above I was comparing the New Testament period with the period that followed, often termed the period of “Christian origins.” This is of course a false dichotomy of sorts, put forth by people who would like to point to some originary and original period of “pure” Christianity in the New Testament period. But the contrast is striking, here, between what Jesus says about power-seeking and position-seeking and the power struggles that came to characterize apostolic Christianity. The church became an arena for gaining and wielding power just like any other, and those with power were not always as servant-minded as Jesus seems to think they ought to be.

Maybe You Should Think About: Do we believe this? 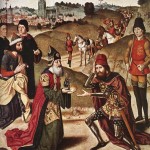 October 4, 2015
The Works of God and the Way God Works: The Lectionary for the 20th Sunday after Pentecost
Next Post 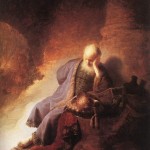 October 18, 2015 Stop Saying "Everything Happens for a Reason": The Lectionary for the 22nd Sunday after Pentecost
Recent Comments
1 Comment | Leave a Comment
Browse Our Archives
get the latest from
Progressive Christian
Sign up for our newsletter
POPULAR AT PATHEOS Progressive Christian
1

What if life wasn't just a...
slacktivist
Related posts from LECTIO