Chekhov’s Gun and the Lenten Journey: The Lectionary for the Second Sunday of Lent

What It’s About: This is God’s covenant with Abraham (nee Abram), which promised Abraham that his descendants would number like the stars of the heavens. This is a pivotal moment in the history of the Israelite people; it is the founding instant of the people, in some ways. You can sense the resignation and weariness of Abraham; he doesn’t expect that he will amount to much. That heightens the promise, and dramatizes the results, that God is suggesting here.

What It’s Really About: This is a unilateral covenant…mostly. This is not a meeting of equal parties, certainly, and it is not even a covenant where both parties promise things. This consists of God coming to Abraham with a plan in mind. Abraham’s contribution is to believe that it is going to happen, which verse 6 calls righteousness. There are many covenants in the bible–the one with Noah, the one with David, the Sinai one–but this covenant is somewhat unique in its unilateral generosity. There isn’t much if/then here; Abraham is being rewarded, not being incentivized. His faithfulness is in the past (and the future); this covenant is the fruit of that faithfulness.

What It’s Not About: It’s not about poor Eliezer of Damascus. Can you imagine? You get immortalized in the sacred texts of several major world religions, and it’s all in the context of Abraham saying, “well, I guess when I die all my stuff will go to this schmuck.” Eliezer is definitely not the kind of heir Abraham had in mind, but he’s prepared to work with what he’s got, before God starts making promises about descendants like the stars. I’d like to think that Eliezer ended up with something too, but considering how contentious the whole Isaac and Ishmael thing got, I doubt it.

Maybe You Should Think About: One of the earliest “camp songs” I can remember singing, at the first summer camp I ever went to, was “Father Abraham.” It’s a catchy tune, but it also does some important work for Christians: it asserts that Abraham is the father not only of the Jews, but of Christians too. Genealogically this is a dubious claim, but theologically it kind of works. Abraham is someone we think of as a progenitor too; the question is, in what sense. How do we read this story, as Christians, in a way that affirms our connection backward in time, without being possessive of Abraham or dismissive of others’ claims to his parentage? In what sense is Abraham our father?

What It’s About: This is good old-fashioned humility from Paul of Tarsus: “Join in imitating me.” Of course, Paul is hopelessly arrogant, but he is also convinced that his own life is a good model for the lives of others. Paul never lacks for confidence; he lives with an enviable conviction about the correctness of his ideas and way of life. In this passage, he is advocating for a kind of ascetic being: denying physical pleasures as a means of focusing on what is really important.

What It’s Really About: This text is included in Lent because it suggests a rationale for self-deprivation. It constructs a this-world/other-world dichotomy, with Paul (and others) as exemplars of how to live as a citizen of heaven, and “enemies of the cross of Christ” as exemplars of the low kind of life of citizens of earth. This dichotomy seems to take on physical characteristics: the citizens of earth are defined by “shame” and by the urges of their bellies. This resonates with the Lenten practices of many Christians; Lent is a time when some people practice mild forms of asceticism, giving things up or taking on tasks for the season. Paul presumably would have approved (though he might have scoffed at the level of sacrifice needed to forego coffee or chocolate or meat). In his exhortation to live as he lived, Paul seems to be revealing that he himself lives some degree of asceticism.

What It’s Not About: It’s not about these bodies. Verse 21 seems to be evidence for those who want to argue for a transformation of the body, and not a resurrection of the physical body we have now. The language of humiliation (current bodies) and glory (future bodies) is mediated by language of transformation, so maybe we keep our bodies after all–they are just transformed into something more suitable for God’s glory.

Maybe You Should Think About: What is behind the practices of deprivation that have come to proliferate in Lent? Why do we give things up for Lent? Is it solidarity? With whom? Is it self-control? For what purpose? Is it tradition? Why? Many people have a sense that giving things up for Lent is something you ought to do, but we don’t always examine our reasons for doing it–if we even have any.

What It’s About: Lent is, at the end of the day, a story. It tells the story of how Jesus goes from being a sage and wisdom teacher to being a martyr and ongoing religious movement. As such, one of the things Lent has to do is move the plot along. It has to approach the cross, in other words; Lent has to move us, inexorably, toward the confrontation between Jesus and death, between Jesus and Rome, and between Jesus and human nature. This story is a part of that; it helps to explain how and why Jesus came to the attention of the authorities. Herod, we are told in this passage, has it out for Jesus. Jesus’ response is defiant, and almost dismissive of the very real power Herod holds. John Dominic Crossan is fond of saying that if you pay attention to Jesus’ words and actions in the gospels, you can’t help but get the sense that “somebody was going to kill this man.” This is exactly what Crossan is talking about; Jesus is behaving in a way that demonstrates very little regard for his own safety, but serves to heighten the tension–the plot development if you will–inherent in the story.

What It’s Really About: This is an interesting appeal to history on the part of Jesus. Jerusalem, he says, is the city that kills its prophets. This is the equivalent of Chekhov’s gun, the idea that once something like a gun is introduced into a story, it has to come into play soon. Once Jesus introduces the death of prophets into the narrative, the foreshadowing becomes very intense. Even if you didn’t know the gospel story at all, you’d know, as Crossan suggests, that someone is going to kill this man.

Maybe You Should Think About: Did Jesus want to die? Or, at least, did he want to confront the Roman power structure? What did he hope to accomplish by doing so? 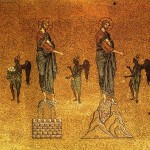 February 8, 2016
Fruits and Temptations: the Lectionary for the First Sunday of Lent
Next Post 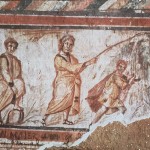