Rotting Summer Fruits: The Lectionary for the Ninth Sunday after Pentecost (and for this moment in American history)

Rotting Summer Fruits: The Lectionary for the Ninth Sunday after Pentecost (and for this moment in American history) July 10, 2016 Eric Smith

Normally, I comment on the Hebrew Bible, Gospel, and Epistle readings for the week. This week, however, I am focusing on the reading from the Hebrew Bible, which comes from Amos, because it speaks in uniquely powerful ways to the historical moment in which we live.

What It’s About: Amos could not have known, thousands of years ago when he was delivering his prophetic oracles, that they would someday appear in the lectionary at this particular moment in American history. Certainly he did not speak his oracles with us in mind. But this passage from Amos comes at an especially fraught and difficult time in our national life, and it provides us with a superb opportunity to talk about our life together. By the time this passage is read out loud in church services on July 17th, two weeks will have passed since the deaths of Philando Castile and Alton Sterling at the hands of police. Two weeks will have passed since the ambush of Dallas police during a protest, resulting in five deaths and many other injuries. And, when Amos is read aloud on July 17th, it will be as the Republican National Convention is scheduled to start the very next day, and the Democratic convention a week after that. It will be an intense moment in America, and a very useful time to take stock of our nation and our society.

What It’s Really About: Amos was a prophet. Today “prophecy” is understood as something Nostradamus did–telling the future before it happens. Prophecy lives in the pages of supermarket tabloids, and it doesn’t have much of a moral dimension. But in ancient Israel, prophecy was a form of social critique. It was more like punditry and advice than future-telling; prophecy existed to evaluate society and to try to correct its wrongs. So in Amos 8, we have just such a critique, and a biting one. Amos sees a society in which people are seeking their own interests–where religion, politics, and economics all have turned into self-seeking and self-congratulatory affairs. Those at the margins of society–Amos mentions the poor and needy–are trampled on by those at the center. It’s a screw-you-I’ve-got-mine mentality, and people assumed that God was blessing all of this, because they were prosperous and happy. But in fact, God was damning this activity, and Amos opens this vision with an image of a basket of summer fruit. Summer fruit might be a potent symbol of plenty and blessing, but in Hebrew it’s also a play on words, doubling as a reference to an “end.” What looks like prosperity is actually a rotting core, because that prosperity is not extended to all. The prosperous exploit the poor, and because of this God will bring an end to this wickedness.

What It’s Not About: Amos isn’t telling the future like a tabloid prophet, but he is giving a warning about the consequences of injustice. He prophesies mourning and destruction, and an end to all the false prosperity. If only some benefit from the plenty and excess, says Amos, then it is not really plenty. If some are left out, or even exploited for profit, then what looks like blessing is actually damnation. Those summer fruits are really an end.

Amos’ critique of his society was that no system built on injustice can endure–and that God blesses no such system. He addresses his words to “…you that trample on the needy, and bring ruin to the poor of the land…practic(ing) deceit with false balances, buying the poor for silver and the needy for a pair of sandals.” Amos might well be describing our own society, with its exclusive and exploitative economic system and its judicial apartheid. He might well be describing our churches, when he says that “the songs of the temple shall become wailings in that day,” because churches have been complicit in this injustice. Amos’ words ring true to our politics, our economics, and our religion, because he was describing a society that was unjust in all the same ways our is unjust.

Maybe You Should Think About: There have been a few news stories lately about how more and more white Americans are waking up to the realities of being a person of color in this society. This is certainly anecdotally true in my experience; last fall at the church I serve we had our biggest crowd in ten years show up for a study on Ta-Nehisi Coates’ book Between the World and Me. People (and I count myself among them) are realizing that our society is not the summer-fruit society that we had imagined it was; it is instead a society built on a foundation of marginalization and violence toward many of its members.

This is a fruitful summer in America, and not all of the fruits are good. Our politics are more toxic than ever (and that’s saying something). The streets of our cities are marked by violence and protest, sometimes at the same time. Social media has become a place for revealing hard truths that had long been hidden. It is a very different world than the one Amos walked around in, and yet Amos’ words ring especially true today. The summer fruits are not what they seem; the prosperity and peace that has been so evident to so many is built on oppression and violence that many of us cannot or do not want to imagine. The question of whether there is some kind of “end”–of the republic, of civility, of the current order of things– is being bandied about with some regularity. This is a time for Amos and his 8th century BCE words. 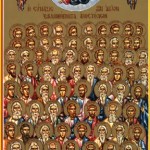 June 27, 2016
The God of Israel and the Children of Other Nations: The Lectionary for the Seventh Sunday after Pentecost
Next Post 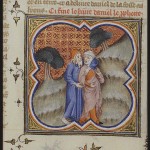