Howard Eilberg-Schwartz (The Savage in Judaism) traces most every form of impurity in ancient Israel back to issues of fertility. I don’t buy that overall, and he recognizes that it can’t cover everything (see his discussion of menstruation. 177-94, where he uncovers several overlapping schemas).

The argument works well, however, for circumcision. He points out that the covenant of circumcision comes in the midst of a promise of an abundant seed (Genesis 17:17; by his count, fertility comes up seven [!] times in Genesis) that will inherit and inhabit and therefore be fertile on the land that Yahweh promises (147-8). Circumcision removes an obstacle to fertility, even as it marks an Israelite child as a fulfillment of the Abrahamic promise.

The notion that Israel is a circumcised people transplanted to be fertile in the land is strengthened by the language of Leviticus 19, which forbids Israel from taking the produce of “uncircumcised” trees (149-54). For three years, fruit would be considered “uncircumcised”; its fruit during that period, Eilberg-Schwartz suggests, is classified as “foreskin,” and therefore taboo to Israel (Leviticus 19:23-25; 149). He suggests that the analogy works because trees must be pruned to bear fruit. Circumcision is pruning of Israelite males, so that they may bear fruit, the seed of Abraham. Circumcision is the “fruitful cut.”

A further dimension of circumcision is the fact that it is a literal cut within the line of descent from Seth. Abraham is “cut off” from his father’s house to become the origin of a new family, a new human race (167). The cut in the flesh cuts Abraham off from fleshly descent, while also linking him to future generations who receive the same sign in the flesh.

Given this background, which Eilberg-Schwartz supports with antheopological evidence, what is striking about Israel’s circumcision is that it was performed on infants. Circumcision has been widely practiced; outside Israel, infant circumcision is virtually unknown. In the ancient world, and in tribal cultures studied by anthropologists, circumcision is typically a puberty rite. That makes sense if it is a sign of fertility, a pruning to make the boy’s penis a fruitful tree. But why do that to infants? (The oddity of Israelite circumcision is worth more than a moment’s reflection, especially as it pertains to continuing Christian debates about infant baptism. To put it provocatively, is “believer’s baptism” a reversion to pagan sacramental patterns?)

Eilberg-Schwartz explains it in the context of patrilineal descent, especially for priesthood (175-6). Circumcision of infants showed that “a boy’s procreative powers were granted by God as a privilege for having been born into Abraham’s line. They were granted in fulfillment of the divine promise that Abraham and his descendants would be fruitful, multiply, and inherit the land. A male’s ability to reproduced was not simply the outcome of his maturation but also a privilege of having a certain genealogy. Circumcision was thus a rite which simultaneously conferred and confirmed one’s pedigree” (176).

This is almost right. I’d correct it by noting that circumcision was from the outset a statement about the impotence of the flesh. Abraham can only father children by Sarah after he has cut himself, after he has removed the flesh. Then he can father the son born of the Spirit. So, circumcision is a sign of “descent” only when we think of descent in a paradoxical way: The children of Abraham were marked not by fleshly descent but by distrust of flesh, and their entrustment to the life-giving God. That’s what their mark in the flesh, the absence on the organ of fertility, meant.

From Abraham on, the most productive, the most fertile, are those without powers of flesh, those who cut off whatever powers of flesh they might possess, and are fruitful by the power of the Spirit who gives fruit. Jesus was just repeating something His Father taught Him when He pointed to little children as model disciples. 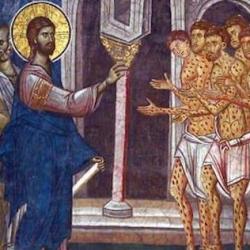