Paul-Francois Tremlett (Levi-Strauss on Religion) provides this neat precis of the central claim of Levi-Straussian structuralism:

“new way of thinking about questions of culture and cultural difference. Language had been seen as a transparent medium for expressing thoughts and for describing or re-presenting objects. In structuralist thought, however, language is understood quite differently. For structuralists, linguistic expressions—utterances or speech acts—are the products not of individual or authorial intentions, but are rather constituted in advance by a hidden or unconscious grammar. Furthermore, for structuralist anthropologists—or at least for Lévi-Strauss—cultures are thought of as analogous to languages and therefore as systems of relations constituted by ‘unconscious foundations’ . . . . Cultural variation is understood as the differential permutation or transformation of a key binary opposition—that of nature to culture—that ultimately and finally points to the structure of the human mind. As such, culture is not so much the product of human action but a reflection of and a series of variations arising from the deep, binary structure that is held to be constitutive of the way human beings think. In other words, the mind is immanent in culture and therefore through the study of culture—of art works, myths, kinship systems, religious representations and so forth—the structure of the mind can be discerned. Through the study of culture—perhaps in particular the analysis of how nature is apprehended through culturally encoded categories and schemes of classification—inferences can be made about how human beings think” (11).

As is well known, much of Levi-Strauss’ theory arises from Saussure’s linguistic “structuralism”: “Lévi-Strauss’ work in anthropology would be profoundly influenced by the writings of Saussure. Like Saussure, he would focus not on superficial cultural variation but on an organizing grammar that lies beneath all cultural systems; like Saussure, his concern would not be with historical change but rather with the synchronic or timeless and systematic, constraining truth that lies behind cultural differences; he would regard the elements of culture such as kinship systems and local taxonomies or systems for the classification of plants and animals as self-referential systems much in the same way that Saussure considered language to be a system of relations; finally, Lévi-Strauss’ approach to culture would be premised on the assumption that culture is structured like a language that if and when it has been correctly deciphered, would reveal a deep truth about the human mind and its workings” (15).

Levi-Strauss’ distinction of nature and culture is homologous with Saussure’s insistence that the relationship between the signifier and the signified is purely arbitrary. (It’s not identical, since for Saussure the signified is a concept, not an actual thing.) Levi-Strauss is fully aware that the distinction of nature and culture is not simply there, not a “natural” distinction, but a cultural one. Tremlett quotes another scholar to the effect that “these two conceptions [nature and culture] stand in a relation of considerable tension. The uniqueness of humanity resides in culture, that which is not natural but socially constructed. However, the basis for this construction is ultimately to be discovered in nature: the cultural is natural. Relations existing in nature are used to produce cultural products which themselves incorporate those relations. As opposed to this, Lévi-Strauss also stresses at a number of points in his work that a contrast between nature and culture is itself a product of culture. The cultural defines and creates the natural in various forms” (76-77).

And then we are reminded of Bruno Latour’s claim that maintaining the distinction of nature and culture is essential to the ruse of modernity, and we begin to suspect that structuralism is doing little but replicating not the pensees sauvages, but the mind of moderns. And we can see the necessity of the deconstructive move that doesn’t so much overthrow Levi-Strauss but rather points to the tensions inherent in structuralism itself (which is what Derrida always claimed deconstruction was doing).

July 15, 2015 Demon Sabbath
Browse Our Archives
get the latest from
Evangelical
Sign up for our newsletter
POPULAR AT PATHEOS Evangelical
1

Church Should Be Your Excuse for...
The Chorus In The Chaos
Related posts from Leithart 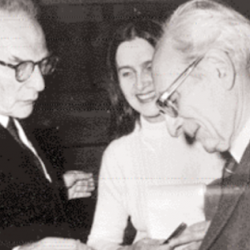