Trump of the Lie

What does Trump do if he loses the Iowa caucuses today? asks Michael Kruse over at Politico. Kruse says that he will do what he always does: “He will deny and distort and belittle his critics and change the subject. He will say that he won.”

Paul Holmes, who writes on public relations and has written about Trump, predicts a response like this: “He won’t say anything that happened was his fault. It’ll either be a case of voters not being smart enough or some dark conspiracy involving the Republican Party or Fox News. It certainly won’t be a case of him saying, ‘Boy, I was wrong about something.’ Any admission of weakness or failure on his part would destroy the brand he’s been building.”

Kruse provides example after example from Trump’s business life where he did just this. He concludes: “Over these last 40 lime-lighted years, Trump has won a lot, but he has lost a lot, too—four corporate bankruptcies, two failed marriages and a vast array of money-squandering business ventures. He lost his signature Trump Shuttle airline to his lenders. His self-branded casinos in Atlantic City struggled consistently to turn profits.” Every time, he has kept to the script: “Never acknowledge failure. Never admit defeat.”

Kruse’s piece put me in mind of M. Scott Peck insightful discussion of pride in People of the Lie, Peck’s classic study of evil. Peck knows that any sin can be “hardened into hell” (he takes the phrase from Gerald Vann, 73). But Peck also agrees with the Christian tradition in which pride holds pride of place among the vices.

“The poor in spirit do not commit evil,” Peck says. “Evil is not committed by people who feel uncertain about their righteousness, who question their own motives, who worry about betraying themselves. The evil in this world is committed by the spiritual fat cats, by the Pharisees of our own day, the self-righteous who think they are without sin because they are unwilling to suffer the discomfort of significant self-examination. Unpleasant though it may be, the sense of personal sin is precisely that which keeps our sin from getting out of hand. It is quite painful at times, but it is a very great blessing because it is our one and only effective safeguard against our own proclivity for evil” (72). He quotes Therese of Lisieux: “If you are willing to serenely bear the trial of being displeasing to yourself, then you will be for Jesus a pleasant place of shelter” (72).

Since the proud cannot bear the pangs of their own conscience, they have to project their guilt onto others. One of the most characteristic tactics of what Peck calls evil people is scapegoating. They have to keep themselves “above reproach,” and so they must “lash out at anyone who does reproach them. They sacrifice others to preserve their self-image of perfection” (73). This sometimes takes the form of imposing heavy burdens on others. Peck has defined evil as “the exercise of political power – that is, the imposition of one’s will upon others by overt or covert coercion – in order to avoid spiritual growth” (74). The proud “attack others instead of facing their own failures. Spiritual growth requires the acknowledgment of one’s need to grow. If we cannot make that acknowledgement, we have no option except to eradicate the evidence of our own imperfection.”

Unlike “psychopaths,” evil people do have a sense of sin and imperfection, but “they are continually engaged in sweeping the evidence of their evil under the rug of their consciousness. . . . Evil originates not in the absence of guilt but in the effort to escape it” (76). The disguise, the cover-up is sometimes more obvious than the evil itself. The masks of evil people (the “people of the lie”) are virtually impenetrable, but it’s possible to catch sight of what Buber called “the uncanny game of hide-and-seek in the obscurity of the soul, in which it, the single human soul, evades itself, avoids itself, hides from itself” (76).

Ernest Becker linked scapegoating with the fear of death; Peck glosses Becker by equating “the fear of self-criticism with the fear of death. Self-criticism is a call to personality change. As soon as I criticize a part of myself I incur an obligation to change that part. But the process of personality change is a painful one. It is like death. The old personality pattern must die for a new pattern to take its place. The evil are pathologically attached to the status quo of their personalities, which in their narcissism they consciously regard as perfect,” and so they must perceive any criticism and call to change as a “total annihilation” (74, fn).

As I wrote a few months ago, he is he “anti-scapegoat” and will remain the anti-scapegoat to the end, whatever the outcome. Trump famously said several months ago that he didn’t ask God for forgiveness. He won’t even let God blame him. 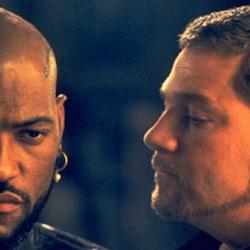 Evangelical
On Trump and Trumpism
Leithart