Candy Gunther Brown’s The Healing Gods is an effort to explain how Complementary and Alternative Medicine (CAM) “entered the American cultural mainstream,” and especially how it achieved “a niche among evangelical and other theologically conservative Christians, although much of CAM is religious but not distinctively Christian and lacks scientific evidence of efficacy and safety.”

This is surprising in part because “many CAM providers make religious or spiritual assumptions about why CAM works, assumptions inspired by selective interpretations of multifaceted religious traditions such as Hinduism, Buddhism, and Taoism (Daoism) that developed in Asia or metaphysical spirituality that grew up in Europe and North America.” It is surprising also because a half-century ago these same practices and therapies were “religiously questionable” among Evangelicals. She wonder “What causes practices that most Americans once classified as illegitimate for medical and religious reasons to be redefined as legitimate routes to physical and spiritual wellness?”

Her central argument is that “CAM promoters strategically marketed products to consumers poised by suboptimal health to embrace effective, spiritually wholesome therapies. Once-suspect health practices became mainstream as practitioners recategorized them as nonreligious (though generically spiritual) health-care, fitness, or scientific techniques—congruent with popular understandings of quantum physics and neuroscience—rather than as religious rituals.” CAM makes dubious use of recent developments in physics to argue that matter is simply a form of energy. Recast as “science” and “secular” rather than religious, the way was smoothed for them to become mainstream, even among cautious Evangelicals.

Brown is suspicious, not to say cynical, about this mainstreaming, but there’s an alternative explanation. Much of modern medicine assumes a mechanistic materialism very much at odds with Christian understandings of matter and bodies. It’s not hard to see why biblically-oriented Christians might gravitate to therapies and practices that promise to treat the whole person – therapies that recognize there’s a whole person to treat.

March 2, 2017
Sacred/Secular and the Triumph of Lent
Next Post

March 6, 2017 Leviticus Is My Life
Browse Our Archives
Related posts from Leithart 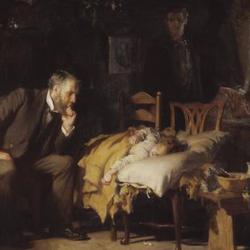 Evangelical
The Costs of C-Sections
Leithart
TRENDING AT PATHEOS Evangelical