Learning from the Hapsburgs

Ross Douthat argues that the cultural and religious diversity of Europe and the US is an enemy of democracy: “mass immigration and cultural fragmentation have brought authoritarian temptations back to life.”

What to do? Douthat suggests that:

The cause of liberal order might be better served by leaders who took a slightly more imperial perspective—not in the sense of imposing policy at sword point, but in the sense of realizing that their societies are so diverse as to require a more disinterested kind of vision from their rulers. Such a disinterested ruler—a good emperor, let’s call him—would see a crucial part of his role as reassurance, recognizing that in a diverse, fragmented and distrustful landscape, any governing coalition is going to look dangerous to those who aren’t included in it. If he comes from a historically dominant group and speaks on their behalf, he needs to go out of his way to address the anxieties of minorities and newcomers. If he’s building a coalition of minority groups, he needs to reassure the former majority that the country of the future still has a place for them. Whatever the basis of his power, he needs to be constantly attuned to the ways that diversity, difference and distrust can make political conflict seem far more existential than it should.

Our leaders might learn something “from monarchies like that of the Austrian Hapsburgs, in particular, that worked to contain and balance religious and ethnic divisions, to prevent disintegration and forestall totalitarianism, and might have succeeded longer absent the folly of 1914.”

May 1, 2017 Romantic and Civic Nationalism
Browse Our Archives
get the latest from
Evangelical
Sign up for our newsletter
POPULAR AT PATHEOS Evangelical
1 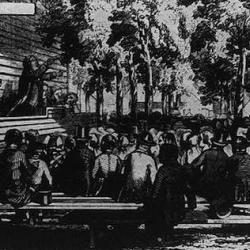