“During the first eighty-eight years of [the 20th] century,” writes R. J. Rummel (Death by Government) “almost 170 million men, women, and children have been shot, beaten, tortured, knifed, burned, starved, frozen, crushed, or worked to death; buried alive, drowned, hung, bombed, or killed in any other of the myriad ways governments have inflicted death on unarmed, helpless citizens and foreigners. The dead could conceivably be nearly 360 million people. It is as though our species has been devastated by a modern Black Plague. And indeed it has, but a plague of Power, not germs.”

These “democidal” regimes are all non- and anti-democratic: “Power kills; absolute Power kills absolutely. This new Power Principle is the message emerging from my previous work on the causes of war and from this book on genocide and government mass murder—what I call democide—in [the 20th] century. The more power a government has, the more it can act arbitrarily according to the whims and desires of the elite, and the more it will make war on others and murder its foreign and domestic subjects. The more constrained the power of governments, the more power is diffused, checked, and balanced, the less it will aggress on others and commit democide.”

Whatever the flaws of democracies, they aren’t democidal but virtually the opposite: “At the extremes of Power, totalitarian communist governments slaughter their people by the tens of millions; in contrast, many democracies can barely bring themselves to execute even serial murderers.”

Not killing your own citizens is a low bar for assessing government, but it’s one that some regimes in the past century have been unable to clear. We who live under non-democidal regimes have reason for gratitude.

July 10, 2017 Paul, the Justified Apostle
Browse Our Archives
get the latest from
Evangelical
Sign up for our newsletter
POPULAR AT PATHEOS Evangelical
1 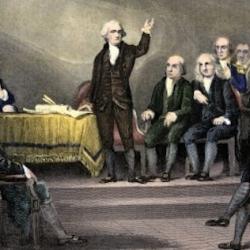 Our Elective Monarchy
"Great Britain is a republic, with a hereditary president, while the United...
view all Evangelical blogs
Copyright 2008-2021, Patheos. All rights reserved.