Isaiah reads like a “greatest hits” of Messianic prophecy.

Isaiah prophesies the birth of the Messiah: “Therefore the Lord Himself will give you a sign: Behold, the virgin shall conceive and bear a Son, and shall call His name Immanuel” (Isaiah 7).

“He prophesies the fact that the Messiah will be a king: “For unto us a Child is born, Unto us a Son is given; And the government will be upon His shoulder.  And His name will be called Wonderful, Counselor, Mighty God, Everlasting Father, Prince of Peace. Of the increase of His government and peace There will be no end, Upon the throne of David and over His kingdom, To order it and establish it with judgment and justice From that time forward, even forever.  The zeal of the Lord of hosts will perform this” (Isaiah 9).

He prophesies about a Messianic servant who will be filled with the Spirit: “Behold! My Servant whom I uphold, My Elect One in whom My soul delights! I have put My Spirit upon Him; He will bring forth justice to the Gentiles” (Isaiah 42).

He prophesies of a servant who will heal and restore the broken in Israel: “Then the eyes of the blind shall be opened, And the ears of the deaf shall be unstopped. Then the lame shall leap like a deer, And the tongue of the dumb sing. For waters shall burst forth in the wilderness, and streams in the desert” (Isaiah 35).

He envisions the sufferings of Yahweh’s servant: “He is despised and rejected by men, a Man of sorrows and acquainted with grief. And we hid, as it were, our faces from Him; He was despised, and we did not esteem Him. Surely He has borne our griefs And carried our sorrows; Yet we esteemed Him stricken, Smitten by God, and afflicted. But He was wounded for our transgressions,  He was bruised for our iniquities; the chastisement for our peace was upon Him,  And by His stripes we are healed. All we like sheep have gone astray; We have turned, every one, to his own way;  And the LORD has laid on Him the iniquity of us all” (Isaiah 53).

Living in a critical period of Judah’s history in the 8th century BC, his prophecies look far ahead and describe Yahweh’s ultimate rescue of His people, the ultimate redemption. When we think of “Messianic prophecy” we are usually thinking of something from Isaiah. No wonder Christians have often regarded the book as a kind of “fifth gospel.”

The notion that Isaiah tells us about the life and ministry of Jesus wasn’t something invented by later Christian theologians. It’s part of the New Testament revelation of Jesus as Messiah.

Matthew quotes Isaiah in regard to the birth of Jesus. John’s ministry is characterized as that of the “voice” calling in the wilderness preparing for the coming of the Lord, a voice prophesied by Isaiah.

Matthew and Luke both characterize Jesus’ ministry in the power of the Spirit with a quotation from Isaiah.

Jesus begins His ministry in Galilee in fulfillment of the prophecy that light would shine on the darkness of Zebulun and Naphtali, a prophecy from Isaiah.

Israel’s hard-hearted response to Jesus’ ministry is like the response of Israel to Isaiah’s prophecy, and the gospel writers quote Isaiah. When Paul gets to Rome and the Jews turn from his message, he quotes Isaiah 6 against them.

Paul quotes from Isaiah 23 times in his letters, and that doesn’t count the number of times he alludes to Isaiah.

He lightly echoes Isaiah 53 when he is describing the work of Jesus as the last Adam in Romans 5:19. “By the obedience of one man many were made righteous,” he says, alluding to Isaiah claim that the Servant, the Righteous One, will “by His knowledge justify many.”

Virtually all the major themes of Romans draw from Isaiah. Paul’s thesis in Romans is that the righteousness of God is revealed from faith to faith, and in talking about the righteousness and salvation of God, Paul is drawing on Isaiah 54.

He quotes directly from Isaiah 52:5 when he charges Jews with doing the very things they condemn in others. He quotes from Isaiah 59:7-8 in chapter 3 to show that all are under the power of sin.

In announcing the single sacrifice of Jesus, he alludes to the Suffering Servant of Isaiah 53. “Who can bring a charge against God’s elect?” is answered with Isaiah 50:8, “It is God who justifies.” The hardening and mercy of Romans 9 makes use of Isaiah 49:10.

No wonder Isaiah dominates our Advent and Christmas hymns, lectionaries, sermons. It is indeed a fifth gospel. 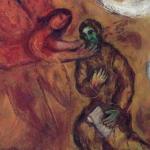 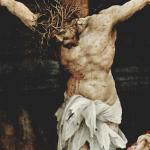 December 8, 2017 Drama of God
Recent Comments
12 Comments | Leave a Comment
"In accordance with reason."
Mat Kay Don’t Do, Don’t Desire
"Very good, Peter- you clarified for me about Judah and Tamar. Thanks!"
JimBull2 Tamar the Righteous
"Fantastic essay and strong finish -- "Heraclitus has taken institutional form. Flux has become our ..."
tovlogos Apocalypse Now?
"Is there such a thing as classical panenthenism, as alluded to in Veli-Mati Karkkainen's "Trinity ..."
D. G. Hogue Apocalypse Now?
Browse Our Archives
Follow Us!