Toward the end of his “Short Treatise on the Lord’s Supper” (sections 57-60), Calvin summarizes the history of Protestant disputes concerning the Supper. He focuses attention on the debate between Luther and Zwingli that culminated at Marburg (1529), and points to the failures on both sides that led to the impasse.

Calvin had the advantage of looking back to these dispute, which enabled him to assess the pluses and minuses calmly. He provides an illuminating near-participant perspective on this early Protestant debate.

Luther, he suggests, misunderstood the Swiss, thinking that “they meant to leave nothing but the bare signs without their spiritual substance.” On this assumption, “he began to resist them to the face, and call them heretics.”

This over-heated rhetoric hardened with time: “After the contention was once begun it got more inflamed by time, and has thus continued too bitterly for the space of fifteen years or so without the parties ever listening to each other in a peaceful temper. For though they once had a conference, there was such alienation that they parted without any agreement. Instead of meeting on some good ground, they have always receded more and more, looking to nothing else than to defend their own view and refute the opposite.”

Luther needed to reassure the Swiss that he wasn’t repeating Roman Catholic errors, that he didn’t endorse adoration of the host, and to “abstain from those similitudes so harsh and difficult to be conceived, or have used them with moderation, interpreting them so that they could not give rise to any scandal.”

He instead made his opinions more difficult for the Swiss to accept, stating his views so extremely that only his unquestioning fan base could accept it: “After the debate was moved, he exceeded bounds as well in declaring his opinion, as in blaming others with too much sharpness of speech. For instead of explaining himself in such a way as to make it possible to receive his view, he, with his accustomed vehemence in assailing those who contradicted him, used hyperbolical forms of speech very difficult to be borne by those who otherwise were not, much disposed to believe at his nod.”

While “Luther failed on his side,” Zwingli and Oecilompadius weren’t without fault. They were “so bent on declaiming against the superstitious and fanatical opinion of the Papists, touching the local presence of Jesus Christ within the sacrament, and the perverse adoration consequent upon it, that they laboured more to pull down what was evil than to build up what was good; for though they did not deny the truth, they did not teach it so clearly as they ought to have done.” They were exclusively anti-Catholic, and didn’t offer a clear positive alternative.

In particular, Calvin says, “in their too great anxiety to maintain that the bread and wine are called the body of Christ, because they are signs of them, they did not attend to add, that though they are signs, the reality is conjoined with them, and thus protest, that they had no intention whatever to obscure the true communion which the Lord gives us in his body and blood by this sacrament.” Against Catholics, they insisted on the sign character of the bread and wine; they neglected the reality that the sign (in Calvin’s words) “represents and presents).

In Calvin’s view, both sides “failed” because they did not have “the patience to listen to each other in order to follow the truth without passion, when it would have been found.”

Calvin quickly added that it was Protestants’ duty to be grateful for Luther, Zwingli, and the others. Gratitude should lead to care and modesty in criticism of them: “For if we are not ungrateful and forgetful of what we owe them, we shall be well able to pardon that and much more, without blaming or defaming them. In short, since we see that they were, and still are, distinguished for holiness of life, excellent knowledge, and ardent zeal to edify the Church, we ought always to judge and speak of them with modesty, and even with reverence.”

He even hoped that the debate was moving toward resolution: “since at last God, after having thus humbled them, has in mercy been pleased to put an end to this unhappy disputation, or at least to calm it preparatory to its final settlement. I speak thus, because no formulary has yet been published in which concord is fixed, as is most expedient. But this will be when God will be pleased to assemble those who are to frame it in one place.” That, of course, proved to sanguine, as Calvin himself discovered in later debates with followers of Luther.

And he rejoiced in the unity that the churches did enjoy, despite their theological differences: “it should satisfy us, that there is fraternity and communion among the churches, and that all agree in so far as is necessary for meeting together, according to the commandment of God. We all then confess with one mouth, that on receiving the sacrament in faith, according to the ordinance of the Lord, we are truly made partakers of the proper substance of the body and blood of Jesus Christ.”

Some understand and explain this more clearly than others. But all should reject “all carnal fancies” in order to “raise our hearts upwards to heaven” and believe that “it is made effectual by the secret and miraculous power of God, and that the Spirit of God is the bond of participation, this being the reason why it is called spiritual.” 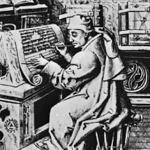 Evangelical
Do This
Leithart
TRENDING AT PATHEOS Evangelical