Mill at an Impasse

John Gray (Liberalisms) argues that the “argument from ignorance” is at the heart of certain liberal theorizing, that it cannot hold up to scrutiny. Human knowledge is limited, and that puts constraints on political certainty. Besides, it is argued that human knowledge advances best when freedom is maximized.

Gray contests the latter claim as it appears in Mill’s On Liberty. Scientific knowledge doesn’t necessarily advance under conditions of “unfettered contestation” (243). Citing Polanyi and Kuhn, he suggests that “the continued growth of scientific knowledge requires dogmatism in the scientific community just as much as criticism. In the real world, scientific communities bear very little resemblance to the relentlessly self-critical explorers and truth-seekers celebrated by Mill and Popper” (243).

The case that liberalism advances moral knowledge is equally contestable and, more, internally contradictory. Mill seems to have believed that “the knowledge yielded by experiments in living [were] a sort of practical knowledge from which . . . theoretical propositions could be derived” (243).

But how do we judge the success of an experiment in living? Does it merely have to improve the lives of experimenters, or should it add to the general well-being of the whole of society? How do we know when the experiment is over? What appears to be a failed experiment may simply be one that never fully developed – due to death or unforeseen contingencies.

The deeper, radical problem with Mill’s claim is that it “seems to presuppose that we have at present no dependable knowledge as to how human life may profitably be lived, but must seek it through trial and error.” It appears that Mill wants to question every received moral requirement, “a procedure that is surely as impossible as it is undesirable” (244).

Ultimately, Mill’s claims about experiments in living prove to be illiberal. Suppose one of these experiments works: “would not the knowledge thereby gained effectively disqualify the forms of life embodied in failed experiments from protection by liberal freedom? . . . what reason is there fore according further freedom of action in respect of a form of life which experimentation has shown to be disastrous” (144).

This is what you call a theoretical impasse.

Gray identifies another fundamental problem in Mill’s attempts to reduce regulations of law and opinion to a single principle, the Principle of Liberty – the principle that states that individual liberty may be restrained only to prevent harm to others.

This Principle cannot do what Mill wants it to do. Gray notes that “it specifies only the necessary, and not the sufficient condition of justified restraint.” It tells us when restraint is not justified. But it tells us nothing as to when restraint of liberty is in fact justified” (220-1).

If we turn to other principles to determine whether or not a specific restraint on liberty is warranted, we face a different impasse. For Mill, “Utility” or happiness is the end of human society. But he also believes that each person should be allowed to pursue what happiness he will. Thus, “when happiness has been disaggregated into a diversity of ends pursued for their own sakes, there can in general be no global, on-balance judgments about aggregate happiness” (221).

Gray states the contradiction sharply: “Applications of the Principle of Liberty . . . presuppose that we are able to make global judgments abut personal and social welfare that are barely intelligible on Mill’s own terms.” Thus, apart from some obvious cases, the Principle of Liberty is “useless in guiding policy about the restraint of liberty” (221).

This is a second theoretical impasse. And it’s impasses like this that have brought Gray to abandon liberalism in favor of post-liberalism. 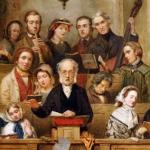 February 6, 2018 Symphonic Love
Recent Comments
0 | Leave a Comment
"Fantastic essay and strong finish -- "Heraclitus has taken institutional form. Flux has become our ..."
tovlogos Apocalypse Now?
"Is there such a thing as classical panenthenism, as alluded to in Veli-Mati Karkkainen's "Trinity ..."
D. G. Hogue Apocalypse Now?
"1) Richard Carrier responds to the Tiberius argument here:https://www.richardcarrier...."
Bob Seidensticker Can We Trust the Gospels?
"I think what can lead a person to God is present in the Holy Gospels ..."
Christiane Smith Can We Trust the Gospels?
Browse Our Archives
Follow Us!