Just before Luke records Jesus’ visit to the home of Simon the Pharisee (Luke 7:36-50), he records Jesus teaching about the responses of the Jewish leaders to His ministry and the ministry of John (7:30-35). They don’t catch the tune of the times, but the tax gatherers and sinners do.

That sets up the irony of the scene at Simon’s home: Pharisees charge that Jesus eats with sinners. Does he? You bet: He eats with Simon!

Matthew’s version of this sermon contrasts the behavior of the disciples with that of “scribes and Pharisees.” Though Luke makes the point more subtly, he has the same target. Jesus is reshuffling and redefining the categories that the Pharisees themselves use, and including them under the heading of “sinners.”

Given Jesus’ testy relations with Pharisees, it’s significant that he eats at Simon’s house at all. Perhaps Simon is a “good Pharisee,” a Pharisee who is responsive to Jesus. There is a hint of this in 7:40, Simon addresses Jesus as a “Teacher” or “Rabbi.” That might might lead us to think that Simon is treating Jesus as a sage, a visiting teacher, who should be honored with a banquet. Simon’s banquet is perhaps like the banquet of Levit a few chapters early.

In fact, Luke has carefully written this story to give us that impression, and then to undermine it radically. The overall scene is quite different. Simon is not a good Pharisee; on the contrary, he invites Jesus to his house, and then systematically insults him in every possible way. He treats him as a low-life, barely worthy of Simon’s notice, not as a respected and honored rabbi. We don’t discover this until late in the story, but it’s the punch-line of the entire narrative.

What has Simon failed to do? It was customary in first-century Israel for guests to receive water, or for a servant to wash their feet. The custom was was both ceremonial and practical. Since they wore sandals rather than closed shoes, their feet would get dirty. Besides in ancient Israel, the dust was considered a sign of the curse. Eating a meal with dust on your feet was eating a meal with the curse-prosecuting soil clinging to you. Simon has not washed Jesus’ feet, suggesting that Jesus is very inferior.

It was also customary for a host to greet his guests with a kiss. If the host and guest were equals, the host would kiss the guest on the cheek; if the guest was a superior, an honored guest like a rabbi, the host might kiss his hands. Simon has not kissed Jesus, shown him no homage as a teacher or rabbi.

Though less common, guests were sometimes anointed in preparation for a meal (cf. the Odyssey). A guest would be washed, rubbed with oil, and then seated at the table. Odysseus receives this treatment even when he’s an unknown stranger. Simon also fails to do this.

By first-century standards, Simon’s treatment of Jesus is nothing less than shocking. It is like bringing in a guest without a word, without offering to take their coat, without offering a seat. It’s like leaving guest standing all bundled in the doorway. That would be at least a gross oversight, and probably a calculated insult.

In Simon’s case, it has to be a calculated insult. These customs were so important, and proper rituals of hospitality were so central to ancient customs that Simon would not do this unthinkingly. Simon is not honoring Jesus. So what is his agenda? It seems that v. 39 gives a clue: Simon invites Jesus to test his prophetic powers, to see if Jesus can discern people’s hearts, especially the heart of a sinful woman. Jesus shows that He is a true Son of the heavenly Father. he might as well have been struck on the cheek, but He does not retaliate in kind.

The fact that Simon shows none of the usual honor to his guest also helps us to understand the woman’s actions. When she sees Simon snub Jesus, she rushes to make up for the failures of Simon’s hospitality. She does all the things that Simon failed to do: and better.

Simon failed to provide water for Jesus to wash his own feet; the woman not only provides water, with her own tears, but washes Jesus’ feet herself, doing the work of a menial slave. Simon offered no kiss: the woman offers many kisses (v. 45), and she kisses his feet. This puts her in an even lower position. She is not merely treating him as a rabbi, but as Lord and Master. Simon failed to anoint Jesus, but the woman anoints Jesus’ feet with her perfume.

She not only identifies Jesus as her Lord, but there are hints of marital and sexual imagery here. The word “touch,” used by Simon, can have a sexual connotation, and Simon perhaps intends the inuendo. The woman also looses her hair, something a woman normally did only in the presence of her husband, unless she was a prostitute who treats every passing man as a “husband for an hour.” She recognizes Jesus as her bridegroom, and she offers herself as bride. She turns Simon’s meal meal into a marriage banquet.

The story turns on the contrast of the Pharisee and the sinner. Simon condemns the woman as a “sinner” (v. 39). Jesus doesn’t deny that she has sinned, but describes her as a debtor who has been forgiven a great debt, and so shows unrestrained love for her deliverer.

Important as that it, the real focus of the incident is the contrasting evaluations of Jesus. Simon the Pharisee doubts that Jesus can be a prophet, since He doesn’t appear to know that the woman is a sinner (v. 39). Jesus knows what he’s thinking, though, which proves He is a prophet (vv. 39-40).

Simon’s reception of Jesus, furthermore, was minimal, insulting; he did not give Jesus the kind of hospitality that would be given to a truly honored guest. The woman, however, has made up for it, mimicking the customs of hospitality by washing Jesus’ feet with her tears, kissing his feet, and anointing his feet with perfume. A woman, and a sinful one, responds to Jesus more discerningly than the well-educated Pharisee, just as a Gentile centurion knows the God of Israel better than the Jews.

This incident exemplifies Luke’s understanding of faith and unbelief. Unbelief isn’t a lack of cognitive assent. It is a refusal to welcome and honor Jesus as a guest. Faith isn’t assent, nor merely trust. The woman’s faith takes the form of welcoming Jesus. To believe and be a disciple is to show hospitality to Jesus. 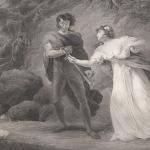 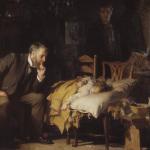 March 2, 2018 Secular Medicine
Recent Comments
1 Comment | Leave a Comment
"NOOOOOO 😭😭Z.2633K.US/ab4859Z"
Moon-Lily Tamar the Righteous
"here comes the brother.tr.92186.ME/DY4859Na"
Luna The Ghost Simplicity: Further Exploration
"The sect of the man and enei sect?"
joeman123456 The Hidden One
"u know what!....all i like about this manhwa is only the art!..and nothing at all!!!...the ..."
TheEventHorizon Tamar the Righteous
Browse Our Archives
Related posts from Leithart

Evangelical
Pharisees and the “Outside”
Leithart

Evangelical
“Do Good and Lend”
Leithart
TRENDING AT PATHEOS Evangelical