The following essay was first published at Firstthings.com.

Lent is a time of renunciation and fasting, spiritual striving, self-examination, contrition, and penitence. It seems a grim and black season of self-accusation. But that’s all superficial. Lent is better understood as a season of Christian comedy. It’s not the glum waiting before the comedy of resurrection begins. Lent is the darkened path that winds toward the rising sun.

It takes a playwright to see the comic potential of Lenten disciplines. Shakespeare sees it because of what Leo Salingar called the “belief” that animates Shakespeare’s comedies. In a nutshell, Shakespeare’s comic creed is that “men can fashion their own unhappiness,” but “they cannot make their happiness unaided.” To be happy, they need the outside assistance of Nature, Fortune, or Providence. Salingar’s comment invites a theological restatement: We can sin all on our own, but we can be saved from the consequences of sin only if grace intervenes.

The shape of the plot is clarified by Peter Saccio’s distinction between two types of Shakespearean comedy. When the problem that inhibits the characters is external, the solution is escape. A father forbids lovers to see one another, so they run off to the magic green world of the wood, where everything is delightfully sorted through. When the problem is an internal fault in one of the characters, happiness comes by invasion. A shrew keeps not only herself but her sister from finding fulfillment in marriage, until a wildman rides into town, eager to wive it wealthily in Padua. Saccio’s scheme, too, invites a theological gloss: In Shakespeare’s comedies, grace takes the form of either exodus or incarnation.

Cymbeline is a comedy of exodus. Cymbeline is king of Britain, a rebellious vassal of Caesar Augustus. His court is a morass of intrigue. His wife plans to poison him so that she can set the loathsome Cloten, her son by a previous marriage, on the throne. Cymbeline’s daughter and only surviving child, Imogen, secretly marries Posthumus, but Cymbeline drives Posthumus into exile, suspecting that Posthumus is more ambitious than amorous.

In Italy, Posthumus meets Iachimo, to whom he raves about Imogen’s beauty and virtue. Enchanted but skeptical, the cynical Iachimo wagers that he can seduce Imogen. He fails, but in revenge he hides in Imogen’s room at night so that he can examine her naked body and steal a bracelet as evidence that he succeeded in his seduction. Posthumus believes Iachimo’s lie, and in a rage sends a message to Imogen telling her to meet him in Wales, where he plans to kill her. When she discovers the plot, Imogen does what every clear-thinking Shakespearean heroine does: She goes to Wales disguised as a boy, aptly named Fidele.

A knot of misunderstandings and deceptions is the very thing that inOthello or King Lear drives the characters helplessly toward a bloody denouement. Cymbeline avoids the cliff because the final scene is a riot of confession. Shakespeare assembles the remaining characters at a prison and begins to unravel the tangled skein. The queen shows no remorse, but on her deathbed she confesses her intention to feed her husband a “mortal mineral” that would have wasted him away “by inches.”

It’s the first domino, and other confessions rapidly follow. Iachimo acknowledges that he lied about seducing Imogen, prompting Posthumus, disguised as a common soldier, to confess his guilt in believing the lie. Imogen, who has no sin to confess, reveals her true identity. Cymbeline’s two sons, kidnapped long before, have wandered into the action, and their true identities are unveiled too.

As Sarah Beckwith has pointed out, Shakespeare self-consciously links these confessions with the practices of confession and penance, subjects of fierce controversy in Shakespeare’s England. Though imprisoned, Posthumus feels more anguish about his “fetter’d conscience,” and longs to have “the penitent instrument to pick that bolt / Then free for ever!” Cymbeline forces a confession from Iachimo, but it’s a relief: “I am glad to be constrain’d to utter that / Torments me to conceal.”

It’s a highly improbable ending, as most comic endings are. But the conclusion works powerfully on stage and, more to my purpose, it displays the healing power of repentance. As Beckwith has elaborated, the confessions heal divisions within individual characters, as confused names and ill-fitting clothes are re-assigned to their proper selves. Characters return to one another”lost children to their father, lover to lover. Britain itself is healed, as conspiracies are exposed and rightful heirs emerge from hiding. Confession recreates a community, as it renews the people that constitute it.

Comedy happens to characters who share Shakespeare’s belief about human helplessness and express that belief in penitent confession. Helpless self-accusation, it turns out, is the road to joyful restoration. It is a happy Shakespearean (and Christian) paradox that final happiness depends on practices associated with the most somber season of the Christian calendar. 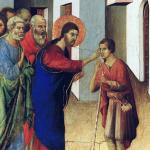 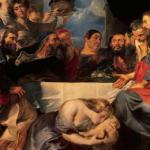