God created a mapped world. It was divided into zones, which were the fundamental zones of human life.

God planted a garden in the east of the land of Eden. The garden wasn’t Adam and Eve’s home, but the place of their meeting with Yahweh the Creator. In the garden were two trees, which had special, we might say “sacramental” significance. The garden was the original sanctuary, and in the sanctuary the Lord gave Adam a priestly task to guard and serve the garden, which included guarding and serving Eve. They were heirs together of the grace of life, but their life together was structured, Adam as guardian and Eve as his helper suitable to him.

The land of Eden was larger than the garden. It was higher country than the garden. We’re told elsewhere in Scripture that Eden was a mountain and we know from Genesis 2 that Eden was high ground because the water flowed from Eden, through the garden, and to the corners of the earth. Eden was the land that Adam and Eve were to rule, the land of his work, the land that Adam and Eve were to fill, subdue, and rule. In the garden, Adam was a priest to Eve; in the land, they were co-creators of a home and a place of work.

Eden was designated as a land, with a garden on the east. And even before the fall there were other areas of the world, given names – like Havilah where there was gold. That larger area, the world as a whole, was a place for rule and dominion. But after the fall, the world outside the sanctuary and land became a place of witness. In the world, Adam’s faithful descendants were called to be prophets.

Creation was divided into garden, land, and world. These were zones of worship, work, and witness. In these zones, Adam and Eve were to perform priestly tasks, rule as kings, witness as prophets.

This triple structure sets the pattern for history.

Genesis records three falls. Adam sins in the garden; he fails in his priestly task of guarding the garden and his bride. Cain sins in the land; he sins in the homeland by killing his brother instead of working and ruling with him. The sons of God sin in the world by intermarrying with daughters of men, instead of carrying out a faithful witness.

Genesis begins the story of the restoration of each of these zones of life. Abraham is like a new Adam, who trusts the promise of God and worships God faithfully, guarding and serving his wife. Jacob is like a new Abel, who uses his cunning and shrewdness to survive the murderous plots of his brother. Joseph is a true son of God who witnesses in the world and provokes a response of faith from Pharaoh and Egypt.

In broad strokes, the Old Testament runs through this same cycle. The Mosaic covenant is a priestly covenant, centering on the tabernacle and the priesthood. The Davidic covenant is a royal covenant, telling the story of a divided kingdom – Cainite Israel v. Abel-like Judah. During and after the exile, prophets come to the fore and Israel becomes a nation of witnesses, sometimes carrying their witness all the way to death.

Each of these zones highlights one or another of the Persons of the Trinity. In the garden, we are priests and relate to God primarily as Father. Of course, we do that as sons and we do it in the power of the Spirit. But we are priestly servants of the Father’s house.

In the land, we are kings and related to God the Son as our Brother. Of course, as brothers of Jesus, we are sons of the Father. But the land is the zone of the Son. In the world, we are prophets and are related to God the Spirit, who is jealous for us to prevent us from intermarrying with daughters of men and who is the matchmaker who forms bonds between different sorts of people.

And this gives us also the rudiments of a Trinitarian ecclesiology: The Church is the priestly family of the Father, the body of the royal Son, the company of prophets who prophesy in the Spirit. 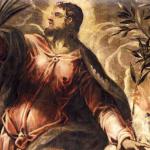