Blasphemy in the Camp

Recent commentators on Leviticus have emphasized the “mixed” character of the blasphemer in chapter 24. He’s the son of an Israelite mother and an Egyptian father. While acknowledging the importance of that feature of the story, Leigh Trevaskis thinks that the emphasis should be placed on the location of the incident.

The camp is the “land” of Israel in the wilderness, a holy place where Yahweh dwells among His well-organized people. The Egyptian-Israelite commits blasphemy in the camp, among the Israelites. Because of his blasphemy, he is driven outside the camp and stoned to death.

The story turns on the need to keep the land of Israel, where the “name” dwells, free of profanations of the name. And the story also foreshadows the threat of exile emphasized at the end of Leviticus 26. If Israel (a mixed multitude at the time of the exodus) blasphemes Yahweh’s name by her conduct in the land, she too will be driven out of the land. Sojourner and Israelite are both under the threat that the land will spew them out if they commit abominations.

Drawing on the work of Bryan Bibb, Trevaskis notes parallels between this incident and the day of atonement ritual: The blasphemer is sent outside the camp like the scapegoat, after people lean hands on him. Trevaskis finds multiple references to the day of atonement in the surrounding chapters, both direct (25:9) and indirect (23:29-30 warns that anyone who fails to keep the rites of the day of atonement will be “cut off” and “destroyed,” like the blasphemer). This supports my earlier suggestion about the double narrative structure of Leviticus.

When we pile all this up – like the meat and grain piled on the hands of Aaron – we get this picture: The blasphemer represents Israel expelled from the land; but, with the day of atonement resonances echoing round about, we should conclude that the expulsion of Israel is ultimately redeeming, that they somehow bear sin and uncleanness into the wilderness of Babylon.

As Paul taught, Israel’s exile, Israel-cut-off, is the strange hope of the Gentiles. 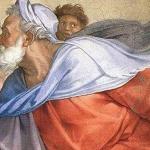 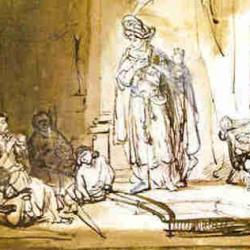