Horsemen of the Apocalypse

The horsemen who are summoned by the living creatures in Revelation 6 are known as “horsemen of the Apocalypse.” This is what they are, technically, since they are horsemen and they appear in a book called “the Apocalypse of Jesus Christ.”

But usually that phrase implies something more: these horsemen, who represent horrors like war, famine, and death, represent a series of signs that will occur just before the end of the world. When you see the horsemen ride out, then you know the end is near.

There are problems with that.

It’s not what Jesus says, though, in His Olivet Discourse (Matthew 24). He says the opposite. When you hear of wars and rumors of wars, He says, don’t be afraid; it’s not the end. There will be famines and earthquakes, but these are just the “beginning of birth pangs.”

Besides, the notion that these horsemen represent the end doesn’t fit into Revelation. Think about what has just happened.

John has ascended into the heavenly throne room of God. There’s a worship service going on. But something is amiss. There’s a sealed book at the right hand of the Enthroned One, and no one is around to open it and reveal and unleash its contents.

No one – until the Lion of Judah appears in the guise of an ascended Lamb. That’s Jesus, in case you were confused, and He’s worthy to take the book and open the seals.

What’s happening? It’s pretty obvious once it’s pointed out (as Jim Jordan did to me many years ago): First there’s no Lamb, then there’s a Lamb. The Lamb appears in heaven. The Lamb that is Jesus. Sound familiar? It should; what John is seeing is the ascension of Jesus from the viewpoint of heaven.

Gathered on a mountain with the other apostles, John watched Jesus disappear into a cloud, entering heaven. Now, in vision, He has the privilege of seeing Jesus’ heavenly advent from the other side of the firmament.

Then Jesus the Lamb opens the seals of the book, and the first four seals unveil the four horsemen. Whatever this is, it’s something that happens in the aftermath of the ascension of Jesus. It’s not a sign of the end of the world. It’s a sign of the exaltation of the Lamb.

Now, what might that be? What happened after Jesus ascended? After Jesus went up into heaven, what came down out of heaven?

Does that make sense? Does the Spirit bring this kind of devastation? Oh yes. Jesus promises the disciples that when He goes away He will send the Helper, the Paraklete, and that the Paraklete will inaugurate legal action against the world: He will convict the world of sin, righteousness, and judgment  (John 16). The Spirit comes as a helper to the church; but to the world He’s a dangerous enemy.

The Spirit is the rider on the horses, and the horses are the church. What we see in the four horsemen is a vision of the fourfold work of the Spirit, the Spirit’s fourfold prosecution that he carries to the four corners of the world.

The Spirit rides out on the white horse of the church, conquering and to conquer. He drives the church on its mission of conquest and victory over the world.

The Spirit divides; He initiates war. Whenever the gospel is preached, some accept it and some resist. The Spirit takes peace from the earth, as Jesus did, setting fathers against sons, mothers against daughters, brothers against brothers. The Spirit rides the red horse of the church, causing division.

The Spirit causes famine. Those who resist can’t find affordable wheat or barley. But the famine is partial: The oil and the wine are not harmed. The anointed ones who drink wine – the christened ones who celebrate a wine feast at the Lord’s table – are untouched. They flourish while their enemies see their food slip through their fingers.

The Spirit kills. Does this sound shocking? Read the book of Judges again. Remember the story of Ananias and Sapphira who lied to the Holy Spirit. The Spirit is the Spirit of life; the Spirit also brings death. He’s the rider on the green horse of the church, bringing death. 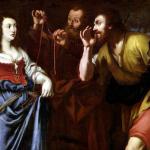 July 10, 2018 The Picture of Epistemology
Recent Comments
0 | Leave a Comment
"NOOOOOO 😭😭Z.2633K.US/ab4859Z"
Moon-Lily Tamar the Righteous
"here comes the brother.tr.92186.ME/DY4859Na"
Luna The Ghost Simplicity: Further Exploration
"wow! pretty fast, i must sayf.636WN.CO/Nq4859U"
joeman123456 The Hidden One
"I ship them, come at me however u want I don't care. I want them ..."
TheEventHorizon Tamar the Righteous
Browse Our Archives
Related posts from Leithart