Reading Revelation 6-7, we might unthinkingly assume that four horsemen, the martyrs, the sealing of the 144,000 are things contained in the book. That can’t be true.

This is a scroll, and you can’t read the contents of a sealed scroll until all of the seals have been opened. The things revealed as the seals are opened prepare for the reading of the book, but they aren’t the book’s contents.

When the seventh seal is opened at the beginning of chapter 8, there’s a pause, silence in heaven for a half hour. During the pause, seven angels come out from heaven, each with a trumpet. When they begin to blow the trumpets, the world starts falling apart.

We might think that the trumpets proclaim the contents of the now-unsealed scroll. But that’s not right either.

The scroll reappears in chapter 10, when a “strong angel” comes from heaven, clothed with a cloud and a rainbow around his head, to hand the book to John. John eats the book, which is sweet to his taste and bitter in his stomach, and then he is commanded to prophesy.

We don’t learn the contents of the book until we get to chapters 11 and following. Up to that point, John has not seen things that “must shortly come to pass.” He sees things that have happened a short time ago. But once he receives the book, eats it, and begins to speak, then Revelation kicks into prophetic gear. Only then do we discover how God is going to vindicate His witnesses.

The Lamb has ascended, and has taken and opened the book. He is the King of kings and Lord of lords, and before the words of the scroll are spoken there’s a trumpet fanfare. The trumpets command attention; they call the world, and especially the people of the land, to listen to what the Lamb’s book says.

They prepare the world, and the people of the land, for the proclamation of the contents of the book.

The astonishing thing is that the Lamb remains silent. He doesn’t say a thing and He doesn’t read the book. Instead, He hands over the book to John.

The voice that announces the contents of the heavenly book is a human voice. Jesus entrusts the proclamation of the world’s destiny to a man. 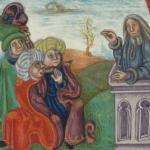 Evangelical
Horsemen of the Apocalypse
Leithart