God and the First Amendment

“The First Amendment’s religious liberty provisions make no sense except on the supposition that God exists – that such a thing as religious truth exists and that the commands of true religious faith are real and superior to the commands of civil society.”

This is the thesis of a 2013 article in the Pepperdine Law Review article by University of St. Thomas law professor Michael Stokes Paulsen.

The existence of God is the only plausible foundation for a doctrine of religious freedom, Paulsen argues: “Religious freedom only makes entire sense as a social and constitutional arrangement on the supposition that God exists (or very likely exists); that God makes claims on the loyalty and conduct of human beings; and that such claims, rightly perceived and understood, are prior to, and superior to, the claims of any human authority. Simply put: God’s commands—God’s will, God’s purposes—rightfully trump man’s. Freedom of religion, understood as a human legal right, is government’s recognition of the priority and superiority of God’s true commands over anything the state or anyone else requires or forbids” (1160).

It’s incoherent to say that governments confer the right to religious liberty: “That would be, subtly and ironically, inconsistent with the very liberty the state purports to confer. It would be an assertion, at some level, of the priority and supremacy of the state and not God: the state, in its beneficence, grants the exercise of religion—the strivings of individuals and groups to discern and fulfill their duties to God, in good faith, as they understand them—a certain amount of leeway. But the nature and extent of such freedom is, on such a view, ultimately for the state to judge” (1160).

Religious liberty is a recognition that the state doesn’t have the competence to judge God: “Because God’s commands, rightly perceived, trump the state’s commands, it makes no sense to say that the state can determine what God’s commands are and whether an individual or group has rightly perceived them. The state may not in this respect, or any other, set itself up as the arbiter of religious truth and enforce its determinations as law. The state is incompetent to determine authoritatively what God does or does not command” (1160).

This requires courts to make judgments about what might and might not be considered a legitimate expression of God’s will. But First Amendment jurisprudence has to sift claims about religious freedom anyway. Paulsen’s proposal would change the kind of arguments, and the criteria for sifting claims.

The outcomes would be different, but not completely so: “the type of conduct that will fail of constitutional protection is of the type specifically and consistently prohibited by the moral codes of the Judeo-Christian tradition, in things like the Ten Commandments and comparable New Testament moral codes, and their counterparts in Islam and most other theistic and even polytheistic religions. To a surprising degree, these common moral prohibitions track the ‘compelling interest’ libertarian exclusions noted above (although with certain differences with respect to prohibitions on sexual conduct, which depart from at least modern-day libertarian sensibilities). Thus, the debates over what conduct cannot plausibly be attributed to God’s commands might end up looking considerably like debates over what conduct falls outside the bounds of libertarian toleration: conduct inflicting serious injury upon non-consenting third-parties (murder, rape, robbery, fraud, slavery, abortion, aggressive war, genocide, or other grave harm to others who are not part of the religious community)” (1259).

The advantage is that acknowledging the “priority of God” would put these decisions on a more coherent basis: “the state’s interests prevail over the religious claimant’s not because the state says so, and not because John Stuart Mill might have thought so, but because God thinks so” (1259). 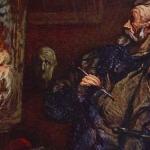