The Adventure of Knowing

Some highlights from this past week’s Theopolis course on “covenant epistemology,” taught by Esther Meek.

1) Using the journey of the Magi as a paradigm of knowing, Esther described knowledge as a venture or adventure, a pilgrimage toward a gift. That is a lovely description that nicely captures much of Esther’s covenant epistemology. It captures the excitement of discovery; the social character of the enterprise of knowing; the fact that knowing involves movement and growth. Unlike many epistemologies, Esther’s focuses on discovery, on coming-to-know.

Importantly, the end of the pilgrimage isn’t an achievement based on merit, but reception of a gift. This is crucial: We need to embark; we need to make the exertion to cross the desert; yet insight comes like a thunderclap, in a great “Aha!” moment of ecstatic surprise.

Yet the moment of surprise is also, paradoxically, a moment of recognition. Because we’ve paid attention to the clues and signposts along the way, we’ve anticipated the destination. We’ve never been there before, but it’s strangely familiar.

2) We might add the call of Abram as another paradigm to bring out another dimension of Esther’s point. God commanded Abram to begin a pilgrimage to a land he didn’t know. Every act of knowing launches into the unknown.

And this leads to one of the coolest insights of the week: Even though we don’t know where our quest will end, we do have an unspecified sense of distance and proximity. We know when we’re a long way from a solution, and we feel when we’re getting closer.

This seems logically impossible: How can we chart how far along we are on the journey if we don’t know the destination? Yet we regularly experience this impossibility. When I write an article or book, I can taste and smell the finished product as I get closer. This isn’t only I have to finish before my deadline in order to get paid. I have a growing sense of knowing what I want to say, even though I don’t fully know what I want to say until I have said it.

3) Epistemology often focuses on intellect, propositions, acquisition of information, or, in recent years, on neuroscience. Esther’s covenant epistemology is refreshingly practical, an epistemology of everyday knowing. Her main paradigms for knowing had to do with skills like riding a bike, handwriting, ballet, cooking, shooting free throws, playing an instrument, and the like. It’s epistemology for ordinary people. It’s an anti-Gnostic epistemology that doesn’t leave our bodies behind.

This implies several things about knowing. It means that we know more than we can say. Explain how you ride a bike. You can’t, and yet you know how to ride a bike. Explain how to type your name. It’ll take few minutes, yet at the keyboard you know where your fingers are supposed to go.

4) Esther rejects standard correspondence theories of truth. Truth is not a one-to-one correspondence of thought, concept, or word to thing. Yet she’s a realist who believes that truth is out there and reality is accessible to us.

Borrowing from Polanyi, she says that the clue that we have made contact with reality is the expectation of indeterminate future manifestations. It’s not that our concepts have captured the real; rather, when we touch reality, it opens up fresh ventures of knowing.

5) Explaining the “covenantal” character of knowing, Esther argued that knowing is like a wedding, a pledging of loyalty and troth to what is not yet known. To know covenantally, we must give ourselves to what we don’t yet know; must live life riskily, in terms of the thing that is yet to be known; must commit to the work that it takes to come to know; must clear a space of welcome for the self-disclosure of the thing we want to know; and must be open to how it will transform us. 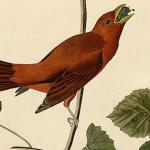 August 20, 2018 Look at the Birds
Recent Comments
0 | Leave a Comment
"I'm pretty safe in telling you that you, like all human beings, interpret. Translation is ..."
Christopher Laird Theology’s Handmaid, Again
"In accordance with reason."
Mat Kay Don’t Do, Don’t Desire
"Very good, Peter- you clarified for me about Judah and Tamar. Thanks!"
JimBull2 Tamar the Righteous
"Fantastic essay and strong finish -- "Heraclitus has taken institutional form. Flux has become our ..."
tovlogos Apocalypse Now?
Browse Our Archives
get the latest from
Evangelical
Sign up for our newsletter
POPULAR AT PATHEOS Evangelical
1

Evangelical
The When, Who, and How of Knowing
Leithart

Evangelical
The Picture of Epistemology
Leithart