Why we need the words “conservative” and “liberal”

Why we need the words “conservative” and “liberal” April 27, 2017 Edwin Woodruff Tait

One often hears people say that the labels “conservative” and “liberal” aren’t helpful and we should drop them. In particular, in Catholic circles it’s common for pious people to claim that the terms “conservative” and “liberal” don’t apply. Many of the folks who say this are what I would call very conservative Catholics who think that there is only one possible Catholic position on most controversial topics. There are no “conservatives” or “liberals” because that would imply two legitimate groups. Rather, there are those who are orthodox and there are those who are not. The “orthodox,” of course, agree with the speaker’s interpretation of orthodoxy. Others genuinely wish for a faith that transcends political labels, and rightly note that “conservative” and “liberal” in their current American political senses don’t map well onto the Catholic paradigm (or any traditional Christian paradigm).

Indeed, I think that it makes more sense to speak of conservative and liberal in terms of Catholicism than in terms of American politics. American political traditions are, by definition, “liberal” in the original 18th-century sense of the term. Americans exalt individual freedom and disparage tradition. To be a “conservative” in the contemporary political sense means to be pro-capitalist and generally pro-individualism–hardly what “conservative” traditionally meant.

While “conservative” and “liberal” do have specific meanings rooted in European politics, I think their most useful meaning is a general, relative one describing dynamics that occur in all organized groups or self-conscious traditions. In any group of people having an identity that endures over some time, there will be two related methodological questions:
1. How much change is compatible with maintaining the identity of the group? and
2. How strictly should norms of belief and/or conduct be enforced? 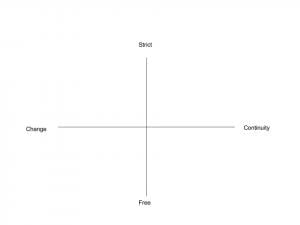 It’s possible to favor continuity with the past but relatively lax enforcement of boundaries, though this may be the hardest position to maintain (it’s also more or less where I fall–go figure). It’s also possible to make a break with the past and enforce it through rigid boundary controls (this is relatively more common, I think). For instance, in Calvin’s Geneva people who gave their children saints’ names could be hauled up before the Company of Pastors and fined. The break with the past was enforced through what looks to most of us today like very “conservative” forms of church discipline. But of course over time the “radical” position comes to be seen as the “traditional” one, making this position simply “conservative.” One very funny example of this was during the years leading up to the collapse of the Soviet Union. Western media referred to those who wanted to preserve Communism as the “right” within the Soviet Union, when of course the entire Soviet political tradition was originally extreme “left.” But by the 1980s people who were orthodox Marxist-Leninists were “conservatives” by the standard of their own tradition.

The naming of the fourth group is a problem. I’m not actually sure that it’s a rare position, but it is a position that tends over time to be eroded, at least in modern Western culture. That is to say, modern Western culture is fundamentally “liberal,” so continuity with tradition has to be a conscious effort by members of the particular community. My own position would (on a scale of 0 to 10 for each of the four categories) be something like 7 on continuity and 3 or 4 on freedom. That is to say, I favor quite a bit of freedom, but not by any means unlimited, while I stress continuity heavily.

A further complication is that these characteristics are, of course, tradition-specific. I’m describing my position primarily with regard to Catholicism–for years before I actually became Catholic, I thought about things through a primarily Catholic lens and saw Catholicism as the community against whose standards I should measure myself. As an Episcopalian, I was more straightforwardly conservative, because the Episcopal Church is much more liberal. Indeed, one of the reasons I became Catholic was so I didn’t have to be my own boundary police any more.

To be more precise, I think about the first category more in terms of the Christian tradition as a whole. That is to say, when I ask “how much should we maintain continuity with the past,” I am asking whether we should be more like liberal Protestants or fundamentalist Baptists or Pentecostals or neo-Anabaptist emergent hipsters or Eastern Orthodox or whatever. But when I ask how strictly the boundaries should be maintained, I am thinking of the authority structures which I have for years now accepted as normative–those of the Catholic Church. All baptized Christians are part of the Church. And this means that the authority structures of the Catholic Church are relevant for all Christians. That’s one reason why I have never fit in as an evangelical. I can’t take their authority structures seriously.

In summary: we need the concepts of “liberal” and “conservative” because all communities have to ask questions about continuity and about boundaries. But we also need to recognize that this is not a simple binary and that the concepts are fluid and relative.

In a subsequent post, I’ll talk about liberal and conservative in terms of contemporary “culture wars,” and how the Christian faith relates to that particular liberal-conservative conflict.

April 11, 2017
"Missing out": why helicopter parenting commodifies children
Next Post

May 12, 2017 How mere Christianity made me a Catholic
Recent Comments
0 | Leave a Comment
Browse Our Archives
get the latest updates from
Light in the West
and the Patheos
Catholic
Channel
POPULAR AT PATHEOS Catholic
1

Review of 2021 Remix of The...
Biblical Evidence for Catholicism
Related posts from Light in the West 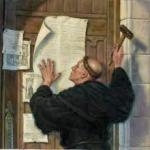 So. About Those Right-Wing Extremists.
This morning I gave up on insomnia and watched Eric Zemmour's 10-minute...
view all Catholic blogs
What Are Your Thoughts?leave a comment