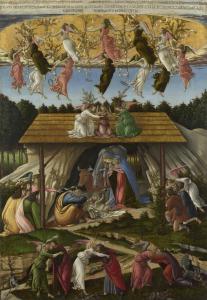 Did Christ become a human being or a man? According to the German bishop Franz-Josef Bode, the first answer is the correct one. At a forum he chaired on the role of women in the Church, Bishop Bode stated, about a year ago, that Christ became a “human being” rather than a “man” in the Incarnation. This shocked his episcopal colleague Bishop Strickland of Tyler, Texas, who called Bishop Bode to repent of his heresy. Due to the way Facebook brings things back on the date they were originally posted, this debate (ancient by social media standards) resurfaced in my feed this past week.

Perhaps a mere church historian such as myself should not get involved in a clash between bishops, especially one a year old. But bloggers know no shame. And the issue Bishop Bode raised remains one Catholics need to think clearly about.

What did Bishop Bode mean by this statement? Did he intend to say that Jesus of Nazareth was not a man? And is that what Bishop Strickland understood him to mean? Or was Bishop Bode saying rather that Jesus’ humanity, not his maleness, is significant for our salvation? And if that’s what he meant, is Bishop Strickland right in accusing him of falling away from the Catholic Faith?

For us men and for our salvation

The first question is easy to answer, I think. There’s no reason to think that Bishop Bode was claiming that Jesus, as a human being, was female or what we would now call intersexed. He appears to have been speaking of the Creed’s affirmation that the eternal Son of God “became man” for “us men and for our salvation.” If I understand Bishop Bode correctly, he was claiming that Jesus’ humanity, not his maleness, brings about our salvation. I’m less sure whether Bishop Strickland understood Bishop Bode’s view in this way. But the question I want to address in this post is whether Bishop Bode was, in fact, right, assuming this second interpretation of what he meant.

The first point in Bishop Bode’s favor is that the Creed says, quite explicitly, that the Son became “man” “for us men.” Nobody thinks that Jesus only saves male human beings. “Men” in that context clearly means “human beings.” It seems to make sense that “became man” has the same meaning as “for us men,” since the point is precisely that Jesus saves us by taking on our nature.

A source of confusion here is the fact that English has historically used the same word “man” to mean “male human being” and “human being in general.” In recent decades, many people have moved away from this usage, so that to many people “man” now means “a male human being.” Typically, conservatives insist that this is unnecessary because “man” can carry both meanings. Bishop Strickland appears to be a good feminist, since he seems to agree with the view that “man” is a gender-exclusive rather than inclusive term wherever it occurs. Or perhaps the feminists have just won this particular fight. But surely Bishop Strickland realizes that the official documents of the Church, in English, are not as feminist as he is, and often use the term “man” in a gender-inclusive way.

In Latin and Greek, of course, there are separate words for the two concepts. And in both Latin and Greek versions of the Creed, the word used is “anthropos/homo” not “aner/vir.” “Human being,” not “man” in a gender-specific sense, just as Bishop Bode claimed. Furthermore, German also has this distinction, using “Mensch” for “human being” and “Mann” for male human being. (Though I believe German feminists find even “Mensch” too male-centered a term, and I’ve sometimes seen German texts say “Mannern und Frauen” rather than “Menschen” to indicate gender-inclusiveness. To me this seems unnecessary, but it’s not my language.)

In German, Bishop Bode said that Christ became for us “Mensch” not “Mann.” In saying this, he affirmed exactly what the Creed says, only adding the negative qualification. But this negative qualification follows from the use of a gender-inclusive term (anthropos/homo/Mensch) where Latin and Greek, like German, have a gender-specific one available.

The historic English use of “man” in both senses, and the insistence of the Church’s hierarchy on using “man” in a gender-inclusive sense even as many English-speakers move away from that usage, seems to have misled Bishop Strickland into thinking that Bishop Bode was saying something heretical when he was literally quoting the Creed. But the theological issue behind the linguistic one remains unresolved.

What is the significance of the maleness of Jesus? How is the historical fact of Jesus’ maleness related to the salvific (as well as historical) fact of his humanity? Does Jesus save us by his maleness as well as by his humanity?

These questions boil away under all the debates over the role of women in the Church. And yes, that includes the debate over the ordination of women that St. John Paul II declared closed a quarter of a century ago.

JPII’s Ordinatio Sacerdotalis does not address most of the substantive theological issues surrounding the question of the ordination of women. JPII cites Jesus’ choice of twelve men and the historic practice of the Church as justifications for continuing the restriction of ordination to men, and declares that the Church has no authority to ordain women. The earlier document Inter Insignores, written by Franjo Cardinal Seper and approved by Paul VI, offers more theological arguments.

Cardinal Seper acknowledges that Jesus took on our common human nature: “Christ is of course the firstborn of all humanity, of women as well as men: the unity which he re-established after sin is such that there are no more distinctions between Jew and Greek, slave and free, male and female, but all are one in Christ Jesus (Gal.3:28).” Nonetheless, he finds it significant that the Incarnation took place “according to the male sex.” Because of the “nuptial mystery” under which the Biblical narrative of salvation is presented, Jesus’ maleness is significant for purposes of sacramental representation. Hence, though Jesus saves everyone, only men can represent him sacramentally.

Ordinatio Sacerdotalis implicitly affirms this line of reasoning and declares the debate closed. But as many previous controversies could have shown us, authority never solves a debate all by itself. The theological issues have to be addressed.

When we don’t do that, we wind up with one bishop accusing another of heresy for affirming the language of the Nicene Creed.

We wind up with comfortable caricatures of the arguments for women’s ordination as merely “secular” and “political,” when in fact the fundamental question is a Christological and soteriological one.

And we also wind up with a radicalization of the pro-WO position, because people with more generally orthodox views are going to respect the Magisterium’s ruling that the debate is closed. That further confirms conservative Catholics in their belief that there are no serious theological arguments to be considered.

This is a personal issue for me, because my wife is an Episcopal priest. In becoming Catholic, I committed to accepting the authority of the Magisterium. But as Bishop Strickland’s tweet demonstrated, there’s a lot of unfinished business here. And if we don’t occasionally point this out, the business will remain unfinished. 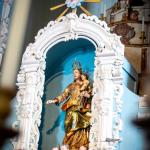 February 21, 2021 Unveiling the Virgin
Recent Comments
0 | Leave a Comment
Browse Our Archives
Related posts from Light in the West

Over at the Catholic Standard Today
My neighborhood made national news when a small two-passenger plane hit a...
view all Catholic blogs
What Are Your Thoughts?leave a comment