Creedence Clearwater and the Rain that Fell on Muhammad

Back in the late 60s and early 70s, Creedence Clearwater Revival were one of the biggest bands around, offering a rootsy mix of rock’n’roll, blues, country, and folk that was quintessentially American. The lead singer and songwriter, John Fogerty, had a gift for crafting punchy songs that captured both the spirit of the times and that ‘old, weird America’ of the frontier, his gravelly holler sounding like he just stepped out of the Goldrush. You’re probably familiar with some of their songs: ‘Proud Mary’, ‘Midnight Special’, ‘Bad Moon Rising’, and probably, ‘Have You Ever Seen the Rain?’ For me, and a friend who encouraged me to write about the song, there’s something about ‘Have You Ever Seen the Rain?’ that resonates on a deep level.  It appears to be the band’s most downloaded song, so perhaps we’re not the only ones.

In interviews, Fogerty has spoken about how the song was inspired by realising the band was falling apart – right at the height of their success. It should have been bright sunshine, but instead he sensed falling rain. So it was he penned the following chorus:

The band’s problems were the usual ego-related tensions, but the lyrics of the song’s brief, enigmatic verses aren’t concerned with describing them at all. Instead, they evoke something more cosmic and universal:

Someone told me long ago
There’s a calm before the storm.
I know, it’s been coming for some time.
When it’s over, so they say
It’ll rain a sunny day.
I know, shining down like water.

Yesterday and days before,
Sun is cold and rain is hot.
I know, been that way for all my time.
Still forever, on it goes
Through the circle, fast and slow.
I know, it can’t stop – I wonder!

‘Sunshowers’ are apparently quite common in the Louisiana, Mississippi and Alabama region of the USA, and Fogerty knew how to evoke the elemental allure of these places. But Fogerty is drawn to the sunshower more as a symbol for life itself – its bewildering, topsy-turvy nature, in which nothing is what it seems and opposites merge, taking on each other properties: ‘sun is cold and rain is hot’; ‘still forever’ yet ‘on it goes’.

Rumi would have liked this song, for he, too, describes life as ‘an upside-down, mystifying game’.  At one point in the Mathnawi, he speaks of a blazing fire and a sparkling fountain:

Whoever went into the fire and sparkling flames
emerged from the water;
whoever ran towards the water
would at once appear in the fire…

Few were they who understood the mystery…

The effect that ‘Have You Ever Seen the Rain?’ has on the listener is topsy-turvy in itself: for an ostensibly sad, plaintive song it is incredibly invigorating. There’s tremendous awe in witnessing this bewildering rain ‘shining down like water’. It’s encapsulated in that final and abrupt non sequitur  ‘I wonder!’ and the aching urgency of the chorus. It’s as if the singer has had a spiritual experience he wants verifying – ‘Have you witnessed this weird rain too?’

There’s another passage from Rumi’s Mathnawi [ii] which might help explain the strange power of this song, one in which Rumi describes the Prophet Muhammad returning home from a funeral.  Whilst her husband has been gone, Aishah has witnessed rain falling and she expects to see him wet as he enters the house. Instead, as she touches the Prophet’s clothes in wonder, she finds he is perfectly dry. The Prophet explains that God has allowed her to see ‘the rain of the Unseen’, and that ‘there are other clouds and another sky’.

But Aisha wants to know more: was today’s rain from the Unseen like the autumnal rain that destroys, or the spring rain that brings life? Interestingly, the Prophet doesn’t answer the question, except to say that the rain will quench the fire of humankind’s ‘selfish desires’. What is implied is that it is of little consequence whether this particular rain is nurturing or destructive (or both), as it is all part of a greater Mercy that encompasses and transcends these opposites over which we obsess. Rumi foreshadows this in his story, paradoxically describing the funeral the Prophet attended as the planting of a seed.

It is also worth noting, that it is Aishah’s rida (contentment – symbolised by the Prophet’s mantle which she drapes over her head) that allows her to see this rain from the Unseen – that is, her contentment with what Is, good or bad, rain or shine. For me, the rueful acknowledgement in Fogerty’s lyrics, ‘Been that way for all my time,’ sound like a seed from which such profound contentment might begin to grow.

Rumi gives further hints of the Unseen rain’s mystifying, transcendent power. What we might sometimes be allowed to see of this rain is barely a trickle compared to its Source which obliterates all opposites:

It comes in trickles from that unseen world
to stop the roar of greed and envy here.

And if the trickle from that world increases,
no virtue and no vice stay in this world.

I sense that in the midst of his dismay as the band he loved so much fell apart, Fogerty was catching a glimpse of this awe-inspiring rain. The band’s name itself has such synchronicity: The Creedence Clearwater Revival. Let’s break that down a little (creatively): A revival of faith (credence) in the clear water of the Unseen. Given the song’s strange power, I would even describe its sadness as a form of ecstasy.  After all, in this topsy-turvy world, ecstasy does not always take the form we commonly assume. Speaking of ecstasy from the perspective of the Sufi, Shaikh Kabir Helminski explains:

Ecstasy (wajd) is strangely associated with agony. To the outside observer the signs of ecstatic transport may even look like torment. To the extent that any self-awareness remains, to the extent that there is an experiencer of the experience, there is the possibility of bewilderment, unfulfilled longing, and even awesome dread.[iv]

Listen to the song. Is wonder and ‘awesome dread’ what you hear too? I want to know…

[i] The Rumi Daybook, translated by Kabir and Camille Helminski

[iii] The Knowing Heart: A Sufi Path of Transformation 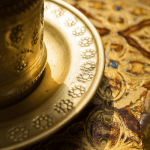 October 21, 2019
How Beauty Evokes Love in Sufism
Next Post 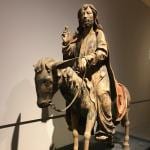 November 24, 2019 Befriending our donkey and our Jesus
Recent Comments
0 | Leave a Comment
Browse Our Archives
Follow Us! 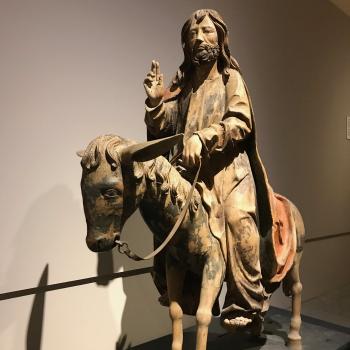