Unite with the Living 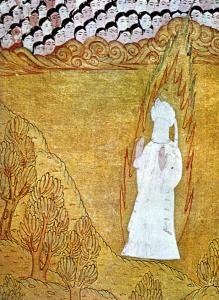 Listen to the voices of the holy in our breasts.
By their hearts all hearts are intoxicated.
Through their nonexistence, we learn to truly be.
[Rumi]

If we could hold a mirror up to our own minds, what would we see? A mirror can’t be bribed or flattered. It simply reflects. If we reflect on what fills our hearts and minds, we may find a constant torrent of the mundane details of everyday life: what is needed to merely maintain our lives, to meet our responsibilities; to earn a living; communicating and interacting with others. Then there are memories and regrets of the past, and anxiety or anticipation of the future. Also, there are always the things too trivial to mention or remember for long. Finally, there are the never-ending commentaries, conceits and excuses, the stories we create over and above the actualities of our lives. Is this what life is meant to be?

As spiritual wayfarers, we might long for something quite different, a space, an awareness, a relationship with the Divine. We may find ourselves questioning how much space we’ve allowed for the Divine and whether that space is sufficiently pure and sincere. We may wonder if we are sustaining our spiritual practices sufficiently to raise our vibrations so we can be living at the level we sense is possible.

No matter how lofty or banal the contents of our minds and hearts may be, one thing encompasses all of it: Haqq.¹ Whether we are aware of it or not, there is the Absolute Reality, the Truth of Divine Being, which is always with us. If we could perceive it, everything would change. The great prophets, saints, and masters, and, of course, Mevlana Rumi, all call us to nothing less than Haqq. Their teachings point to a Reality with implications that may shock us, stun us with its Power and Beauty.

The following poem, “Unite with the Living,” from Book I of Mevlana Rumi’s Masnavi, calls us to recognize this Reality.

When the torrent reached the sea, it became the sea.
When the seed reached the corn field,
it became the crop of corn.
When the bread reached connection with the human,
it became living and full of knowledge.
When wax and firewood were devoted to the fire,
their dark essence became light.
When the dusty stone of antimony entered the eyes,
it turned into sight and became watchful.
Oh, happy is the one who was freed from self
and united with the existence of the living!
Too bad for the living one
who kept company with the dead!
That one also died, life sped away.
When you run for refuge to the Qur’an of God
you have mingled with the spirit of the prophets.
The Qur’an is the states of the prophets,
those fish of the holy sea of His Majesty.

All of these examples — the seed, the bread, the firewood — are metaphors for something beyond the mundane. Through them, we can glimpse the greater depths of the Reality that Rumi is teaching us about: how to realize Oneness, to discover a deeper Reality, to move toward Truth and to cultivate it. Rumi tells us that whatever we sow in nonexistence, we reap in existence. He describes our relationship with Unity through his references to movement and transformation. The metaphors of “surrendering” to the fire, “entering” the sea and “becoming” the corn crop hint at the natural sequence of events that occur as the soul draws nearer to Haqq. Everything has a covenant with God. The bread doesn’t become food until the human being becomes hungry enough to long for food. The whole poem is advice for us. Rumi tells us in rapid succession, “Be a candle but burn! Be firewood, but burn! Be a torrent, but go to the sea! Be bread, but get eaten!”

The poem also teaches that the Qur’an is the state of the prophets, which is a very important idea. In telling us to run for refuge to the Qur’an, we are being told our lives and our spirituality are not intellectual processes. In reading the Qur’an, we can pray for the spirit of it to come into us. That is the state of the prophets. We try not to read it with just the conceptual, thinking mind. By doing so, something arrives and enters our perception and awareness through the subtle faculties of the heart.

By looking deeply into Rumi’s stories and poems, we can see how he is living in Oneness. We see that he continually enters into that Reality. He shows us how the whole of physical existence is a reflection of that Reality, which has no dimensions, yet contains all dimensions. We learn that we have a relationship with “nonexistence.” Everything in existence here that has a beautiful surface meaning also has a much deeper meaning and essence there, in nonexistence. In our relationship with what is beyond space and time, we sow and we reap.

Rumi takes us far beyond our everyday concerns by putting them into a perspective that’s shockingly different. This is the perspective of trust and faith, where all questions are answered. We could even say this perspective is a kind of bliss. From this vantage point, we can see all the things that we’re so prone to be distracted by, to worry over, to be fearful about, and try to strategize and plan for. From this higher perspective, we experience a dimensionless Reality, a oneness of pure abundance, guidance, beneficence, and love.

This Oneness of Reality is not meant to be considered only during moments of our spiritual practice. That would make the idea subjective. Science has shown this is an objective truth. Through research and verifiable experiments, science has proven that existence is a oneness in which each of us are profoundly related to each other. They call it “quantum entanglement.” Studies have shown, for example, that there is a connection, a mutual influence, among people who have come together and been connected for years in meditation. The same applies to those united by worship and zhikr.

There are aspects of ourselves that seem discrete and separate. On one level, we relate to each other as separate beings with varying preferences, egos, thoughts, opinions, and points of view. However, in another dimension we’re experiencing something simultaneously together. There has been evidence of this throughout the ages. One example is the simultaneous formulation of calculus in the seventeenth century by Isaac Newton in England and by Gottfried Leibniz in Germany. There are many other examples of events that are experienced and discoveries made by different people in different places at the same time. We learn, for example in al-Futuhat al-Makkiyya by Ibn Arabi — the Andalusian Sufi mystic, poet, and philosopher — about spiritual insights he received that were accompanied with the specific knowledge that other people in other parts of the world were receiving the same insight at the very same time.

Rumi is constantly giving expression to the dimension of Haqq. For example, in a well-known quatrain he tells us:

Out beyond ideas of faith and denial — iman or kufr² —
there is a field. I’ll meet you there.
When the soul lies down in that grass,
even the words you and I have no meaning.

Another poem, “The Voices of the Holy,” teaches us about the influence of those who are consciously living in Haqq , this all-encompassing Reality. Their “voices” are a source of blessing and healing for us who feel trapped in a world of ever-changing conditions:

Truly is there any fair thing
that has not one day lost its luster
or any roof that did not become a floor?
except the voices of the holy in our breasts,
that resound like the trumpet of resurrection?
By their hearts all hearts are intoxicated.
Through their nonexistence, we learn to truly be.
The saint is the amber that attracts our thought,
the delight of revelation, the inspired mystery.

The message of these poems is not a merely intellectual proposition to agree or disagree with. It is something to be grasped by the heart. It is a Reality actualized in those human beings who have become “complete” and whose influence never dies. For us it means not clinging to our mundane fears and anxieties, our pride and vanities. For us it is the result of making space in ourselves for the Sacred. Rumi is saying, dear friends, this is what is Real; come, unite with the Living.

A chapter (revised) from In the House of Remembering, The Living Tradition of Sufi Teaching. All translations by Kabir Helminski.

1. The Truth, the Absolutely Real.

March 28, 2021
Prophet Muhammad and the Garbage Thrower
Next Post

June 19, 2021 Beyond Gain and Loss: Rumi's Teaching on Surah Ash-Sharh
Recent Comments
0 | Leave a Comment
"I Think this is an informative and interesting blog so I think it is very ..."
Uniswap x How Awake Are We? When Waking ..."
"you weren't on this train i hope: https://www.bbc.com/news/wo..."
mike malzahn Entering the Garden
"what could a mere mortal possibly do to hurt the feelies of an all powerful ..."
crackerMF The Hajj and Forgiveness
"These are chemically induced delusions, and the real world is still there when the effects ..."
David Cromie What if Allah is Beautiful and ..."
Browse Our Archives
Related posts from The Living Tradition